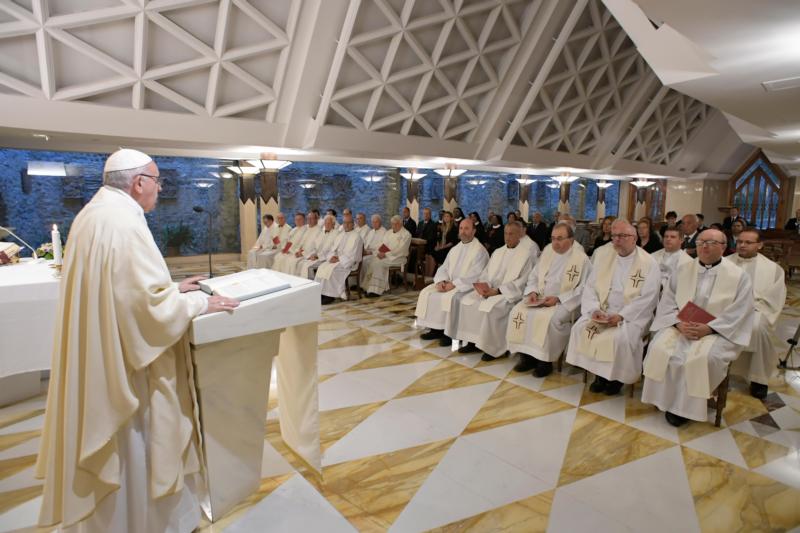 Pope Francis celebrates morning Mass in the chapel of his residence, the Domus Sanctae Marthae, at the Vatican Sept. 13. (CNS photo/Vatican Media)

VATICAN CITY(CNS) — Christians are not defined by their baptism but by whether they live their lives according to God’s command to love their enemies, Pope Francis said.

While it may seem easier to speak ill of an enemy, Christian logic goes in the opposite direction and follows “the folly of the cross,” the pope said in his homily Sept. 13 during morning Mass at Domus Sanctae Marthae.

“Only the merciful resemble God the father. ‘Be merciful, just as your father is merciful.’ This is the path, the path that goes against the spirit of the world,” he said.

The pope reflected on the day’s Gospel reading from St. Luke, in which Jesus tells his disciples to “love your enemies, do good to those who hate you, bless those who curse you, pray for those who mistreat you.”

The command to love and pray for one’s enemies “is the way to live like a Christian,” which entails mirroring God’s infinite love and mercy, the pope explained.

However, he added, those who resort to gossiping and “the logic of insults” live “like a pagan with a spirit of worldliness” that seeks to destroy others.

Pope Francis said that instead of destroying others, Christians must look at themselves and accuse themselves so that they may reflect God’s mercy upon others.

“Yes, accuse yourself. It will do you good. The only licit accusation that we Christians have is to accuse ourselves. For others, there is only mercy because we are children of the father who is merciful,” the pope said.

PREVIOUS: To hear from God, we must first learn to listen

NEXT: The meaning of life is love, pope says