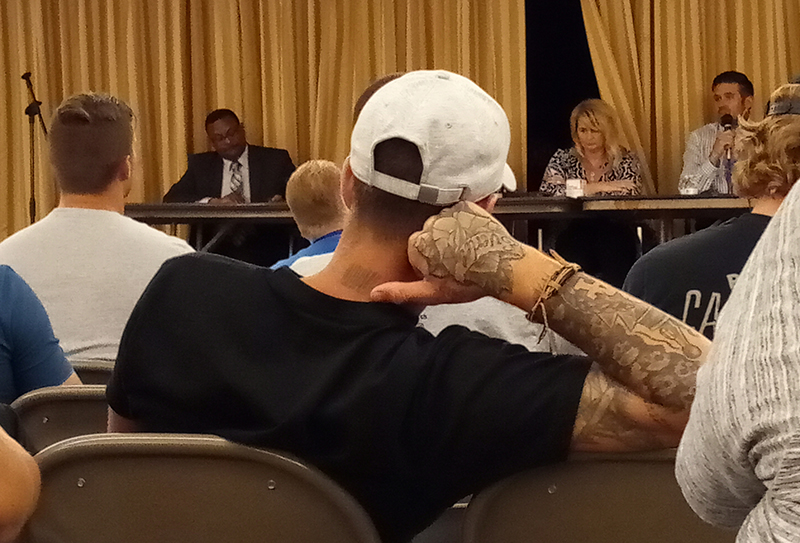 An attendee listens to a panel discussion during a Sept. 13 addiction awareness event hosted by St. Thomas Aquinas Parish in Croydon. Now in its fourth year, the gathering draws agencies and residents throughout Bucks County. (Photo by Gina Christian)

Synthetic opioids such as fentanyl have driven the increase, although an in-depth CDC analysis, based on 2015-2016 data, showed a significant spike in overdose deaths from cocaine and psychostimulants such as methamphetamine and MDMA.

For Mark Kolesar, the organizer of St. Thomas Aquinas’ awareness event, the grim statistics mean there’s more to be done in the fight against addiction.

“We can’t stop working with the forces of good or hope,” he said. “We have to keep at this.”

“Bob was instrumental in getting my cousin Jerry sober,” he said. “Jerry was doing prison ministry within three years. When I saw Bob again five years ago, I kept thanking him for that, and we decided to collaborate. He had the message, I had the organization — and one plus one equals three.”

Kolesar and Bellerby began developing twice-yearly addiction awareness events, and although Bellerby passed away two years ago, Kolesar remains committed to carrying on his ministry at St. Thomas Aquinas.

As part of that legacy, Kolesar has worked to invite an increasing number of recovery organizations and mental health awareness professionals, along with law enforcement and elected officials. 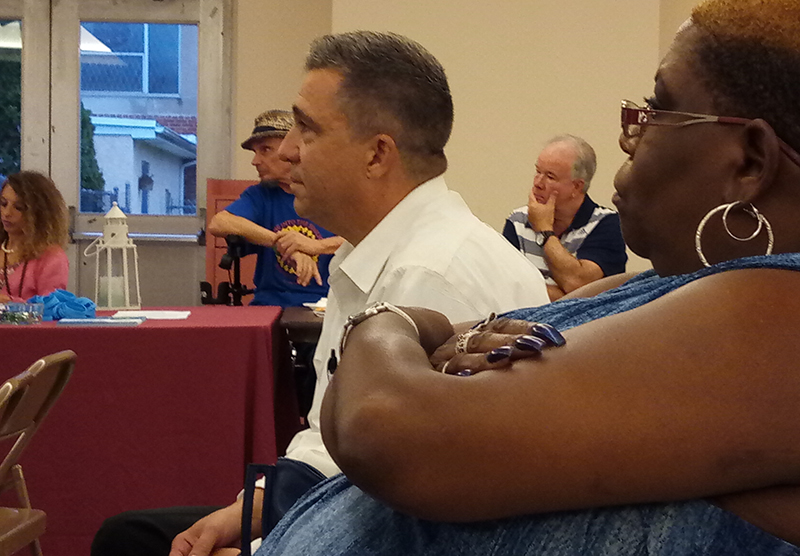 “There’s a higher level of mobilization and motivation whenever we do one of these events in a place of worship,” said Weintraub. “And we have to tap into that in order to beat this.”

Weintraub noted that faith communities can provide practical support for those struggling to achieve sobriety, such as mentors and rides to treatment centers.

The latter issue is particularly important in Bucks County, said Weintraub, since public transportation in the area is insufficient for many residents.

Weintraub added that churches can destigmatize addiction by “showing that it’s OK to be in recovery, and that people in recovery are just like the rest of us.”

For those with loved ones in active addiction, the event provided resources such as Nar-Anon, a 12-step support group for family and friends.

“Addiction affects the whole family,” said Carolyn Henkerson, a Nar-Anon member. “We need to understand that we didn’t cause it, we can’t control it and we can’t cure it. But we can realize we’re not alone, and we can be there for each other.”

Also in attendance were members of the Calix Society, an international association based in Glenside that promotes spirituality among sober Catholic alcoholics. With chapters throughout the United States, Ireland and the United Kingdom, the society has an estimated 1,000 members. Local groups must obtain permission to form from their diocesan bishop, and priests are asked to serve as chaplains whenever possible.

In the greater Philadelphia area Calix groups, or “units,” meet at several area parishes including St. Patrick’s in Norristown, Nativity B.V.M. in Media, St. Gabriel’s in Philadelphia and Queen of the Universe in Levittown. (A virtual meeting, available online and by telephone, can be accessed by emailing admin@calixde.org.)

Tom Gallagher, a member of the Calix unit at Queen of the Universe, celebrated his 20th anniversary of sobriety by attending the St. Thomas awareness event.

Gallagher, who has publicly shared his story of recovery from alcoholism, said that a return to the confessional led him back to the Catholic faith.

“In Alcoholics Anonymous, I had to admit my past wrongs to God, myself, and another human being as part of regaining sobriety,” he said. “So I went to confession because I knew the priest couldn’t squeal.”

While speaking with the priest, Gallagher’s chronically injured back — damaged by car accidents, football injuries and fistfights — was suddenly restored.

“I knew God touched me in that confessional,” he said. “It was a sign of a deeper healing.”

Kolesar notes that by tackling addiction head-on, the church can also effect healing in the larger community.

As an example, he cited an awareness event at which a town watch organizer protested the presence of a recovery home manager, citing concerns that such facilities threatened neighborhood safety. The event allowed for dialogue that ultimately led to a mutually supportive rapport between the two individuals.

“That’s the invisible hand of the Catholic Church, inviting people to communicate, and not to isolate and be angry,” said Kolesar. “This is where the church needs to be.”