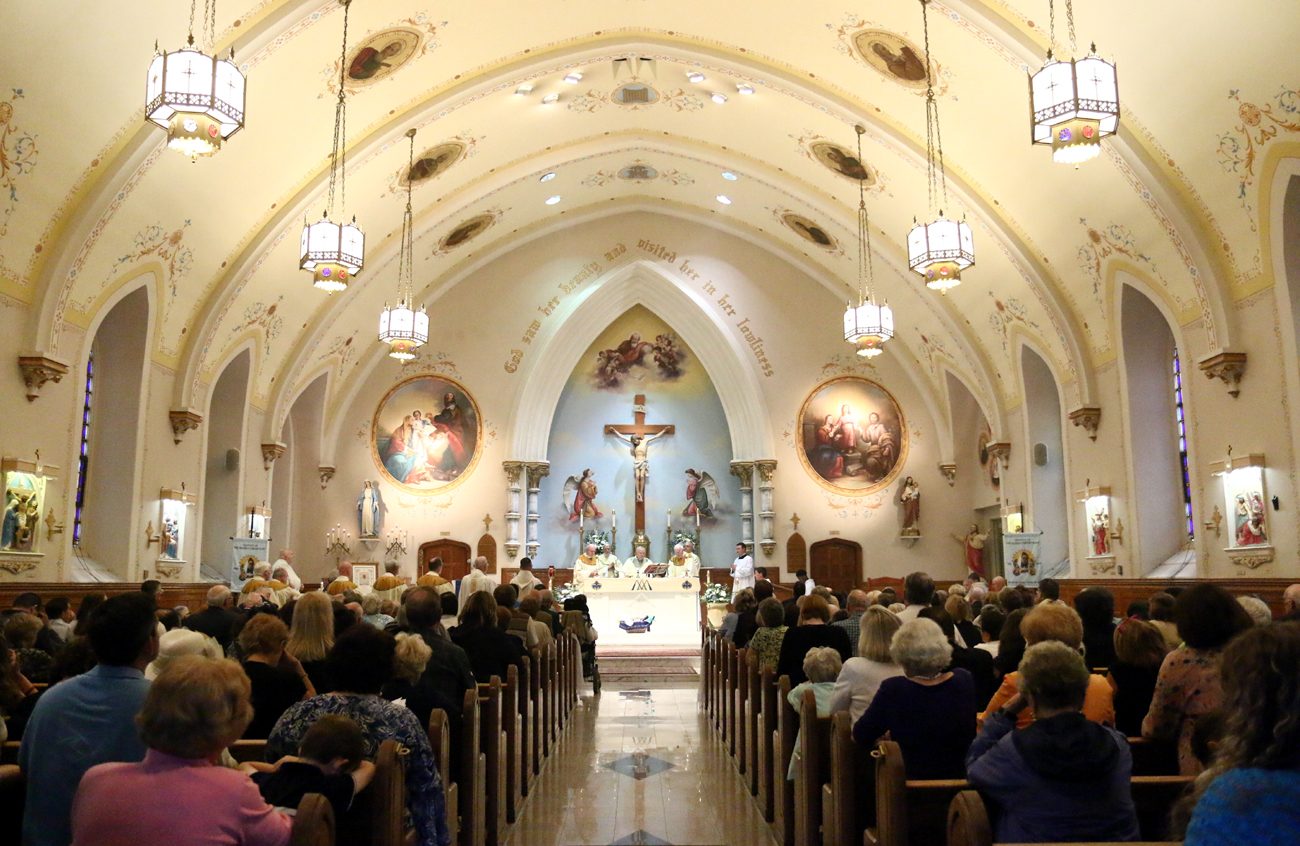 Parishioners and clergy gather for worship on Saturday evening, Sept. 8, for the 150th anniversary Mass of Nativity B.V.M. Parish. Archbishop Charles J. Chaput was the main celebrant of the Mass. (Photo by Sarah Webb)

When Archbishop Charles J. Chaput visited Media on Saturday, Sept. 8 for a 150th anniversary Mass for Nativity of the Blessed Virgin Mary Parish, he celebrated Mass in one of the prettiest little churches you will find anywhere.

(See scenes from the Mass here.)

While the parish claims 150 years it could just as easily say 160 years. Its forerunner, Holy Name of Mary Chapel, served by St. Thomas the Apostle Parish in Glen Mills, was established in 1858. On May 15 of that year St. John Neumann dropped by to celebrate Mass, according to a parish history. In 1862 a brick chapel was erected on the campus of the present church, and it remains in use for various activities to this day.

In 1868 Holy Name of Mary Chapel became Nativity of the Blessed Virgin Mary Church with Father Henry Wright the founding pastor. When in 1881 Father Wright announced plans to build a permanent church, he gave his parishioners a special gift. He informed the congregation he already had most of the funds needed to build it. It was his own family money, and as a matter of fact Father Wright’s father lived with him in a section of the brick chapel that was also a temporary rectory. Both Father Wright and his father are buried in the parish cemetery.

The new stone church, Gothic in style, was modest in size — 48 by 85 feet — with a listed capacity of 600 worshipers. Over the years the church dimensions haven’t changed appreciably but apparently those of the worshipers have. Today it is calculated to hold 350 for Mass. 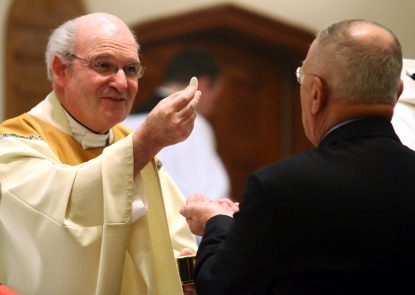 No sooner was the church built than Father Wright established a school, at first staffed by lay teachers but beginning in 1912 the Sisters of St. Francis for most of its history. They were followed by the Sister Servants of the Most Sacred Heart of Jesus, and finally lay teachers again. At this time approximately 250 parish children attend Mother of Providence Regional School located in Wallingford.

Father Wright has been succeeded by a series of capable pastors, each contributing to the parish in his own way. Amenities at the church include a daily adoration chapel and a crying room, and a beautiful shrine to Our Lady obtained from the former St. Edward Parish in Philadelphia.

Most recently, a large outdoor mural was installed this summer on the former school building that depicts the Blessed Virgin and her parents Joachim and Anne. It was painted by Neilson Carlin, the artist who painted the icon of the holy family for the World Meeting of Families in 2015, which is now in the Cathedral Basilica of SS. Peter and Paul.

By recent count, the parish has about 5,400 members and is more than holding its own, according to Father Edward Bell, who has been pastor for the past 15 years. He finds it encouraging that young families continue to relocate to the Media area, the seat of Delaware County.

Because of its relatively small church there are five weekend Masses, and Father Bell notes the weekly confessions are well attended, as is the adoration chapel.

Social outreach is a prime concern, whether it is providing meals to St. John’s Hospice and St. Francis Inn in Philadelphia or assisting other areas in need both at home or abroad. For example, a group of parishioners traveled to Biloxi, Mississippi in 2005 to provide assistance in the wake of Hurricane Katrina, providing the parish with a motto that has remained ever since.

A large statue of Christ was toppled at the retreat house where they were staying and the hands were broken off. The group resolved to be “The Hands of Christ” and the motto has remained ever since, whether it is working with the poor in St. Croix or Kensington or wherever.

John Blisard, Nativity B.V.M.’s parish services director, also notes “the outstanding sense of outreach in the parish. We have fundraisers for various causes, we have a very good St. Vincent De Paul Society,” he said.

While many parishioners can trace back generations, the parish is welcoming to newcomers, according to Linda Reilly.

“I’m a widow (and) moved here five years ago,” she said. “I started going to daily Mass and a group of women really embraced me. We are the Eight O’clock Group. The people are nice here and so are the priests.”
It sounds like Blessed Virgin Mary Parish is well positioned as it looks forward to its next 150 years.