2,000 enjoy day with Jesus, each other, under Malvern Retreat’s tent 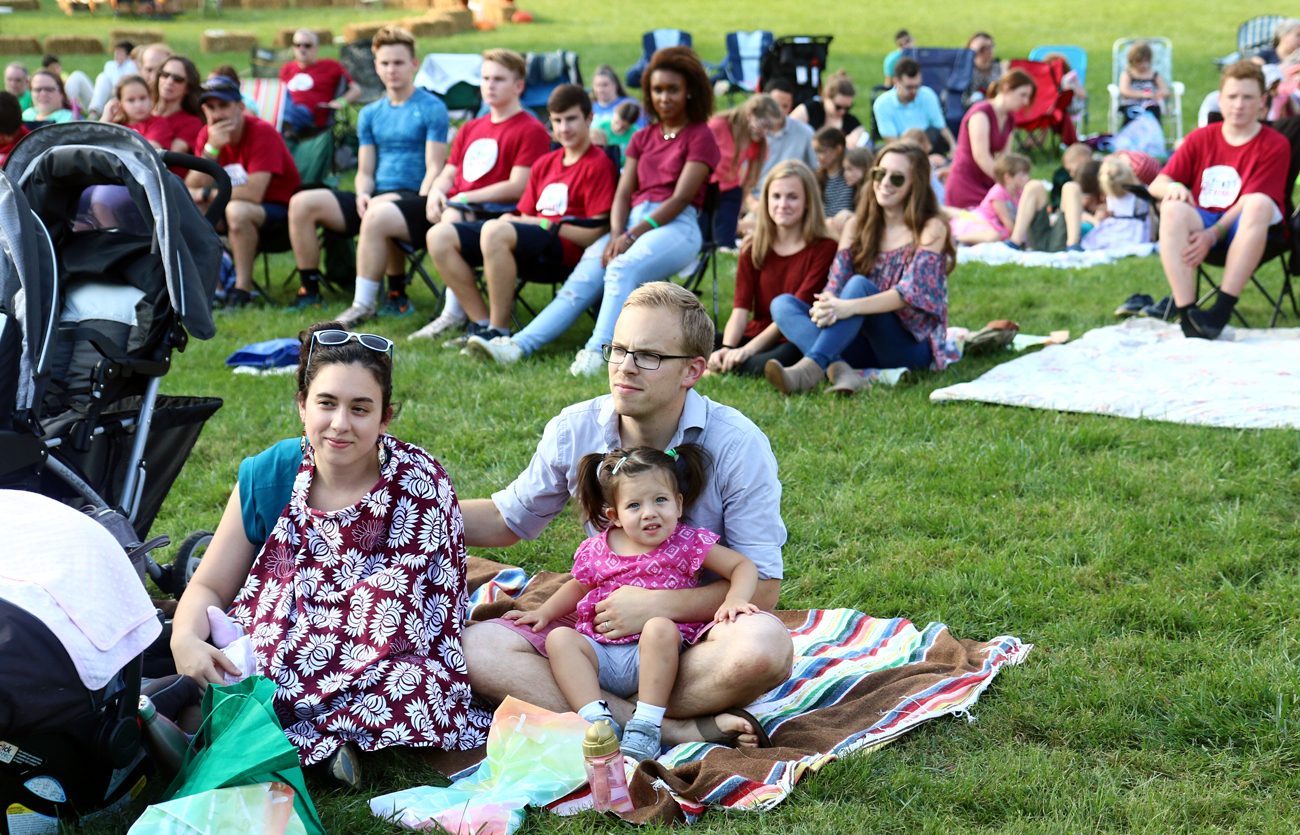 Some of the 2,000 attendees on the grounds of Malvern Retreat House and inside a large tent enjoy the inaugural Catholic Tent Revival on Sunday, Oct. 7, featuring speakers, prayer, music and friendship.

They traveled from across the Mid-Atlantic region to join the first event of its kind in the 106-history of the retreat house. With the sun shining on the field scattered with bales of hay and pumpkins, buses shuttled families from multiple parking lots in the Malvern/Paoli area, assisted by 100 volunteers including adults and families.

(See a photo gallery of scenes from the day here.)

Costs to run the free-admission event were paid by a host of sponsors led by Dr. Rocco and Barbara Martino.

“This was a dream beyond any of our expectations; the joy manifested on the faces of people of all ages seeing the tent, staging and lighting left me speechless,” said Mark Poletunow, president of Malvern Retreat House.

Teresa Peterson and her band led the people in praise and worship music drawing everyone into prayer. Marty Rotella, three-time Grammy nominee, rallied the crowd with his new theme song for the retreat house, “Come as You Are, You are Welcome Here!”

The revival “showed me a touch of heaven on earth,” said Sue Little of Roanoke, Virginia. “The joy in the tent and on the field was overwhelming. We could feel the excitement as soon as we arrived off the shuttle.”

Rob Evans, “the Donutman,” entertained the younger children for an hour. Local mother Kelly Tunulo said, “My little one was dancing and singing Jesus songs. It was great.”

The Missionary Image of Our Lady of Guadalupe, strategically placed on the tent’s stage, represented the Blessed Mother during the rosary devotion at 4 p.m., in unity with the National Rosary Crusade Coast to Coast.

Auxiliary Bishop Timothy Senior, along with diocesan priests, celebrated Mass after the recitation of the rosary, joined by seminarians from the Archdiocese of Philadelphia.

Father Stephen DeLacy, vocations director for the archdiocese, invited people to consider the priesthood and diaconate, supported by the example of the joyful seminarians.

“No words could possibly describe how all of our Malvern staff and volunteers worked as a team in making this a memorable event,” said Michael Norton, vice-president of institutional advancement at Malvern Retreat House. “We are so proud of our staff in diligently working with joy on this important day.”

Archbishop Charles Chaput was in Rome for the ongoing synod of bishops on youth, but he sent along his comments to participants of the Catholic Tent Revival.

“Revival time is here! The success of the day is not judged by the number of people who gather, but rather in the profundity of God’s healing love touching hearts and souls and making new disciples who go out into the world to proclaim the Good News — the truth of Jesus Christ,” he said.

The day was brought to national prominence with the work of Eternal Word Television Network (EWTN) recording the entire day for their global radio broadcasts and providing social media news feeds. The network will air audio versions of talks from the revival Oct. 20 on the Radio Classics program.

The revival was preceded by music from recording artist Teresa Peterson and her band with the debut of her new CD, “Faithful.”

While a misty rain fell outside the tent, the array of colors inside it along with the Audio Visual Wall on the field and the lights from the retreat house’s buildings set a bright mood for members of the Men of Malvern joining the Prosit and Matt Talbot groups on retreat over the early October weekend.

The next Catholic Tent Revival is scheduled for June 28-30, 2019. Father Larry Richards has already committed to be a Friday evening speaker, and more details are planned.

“We wanted to change the venue to late June since we have so many magnificent events in the fall in our area,” said Marketing Director Anne McGlone. “We will open all of our retreat rooms for those who want to stay for the weekend with their families.”

She hopes this year’s Catholic Tent Revival offered attendees a “brush from heaven,” one in which a new tradition has been created for Malvern Retreat House.