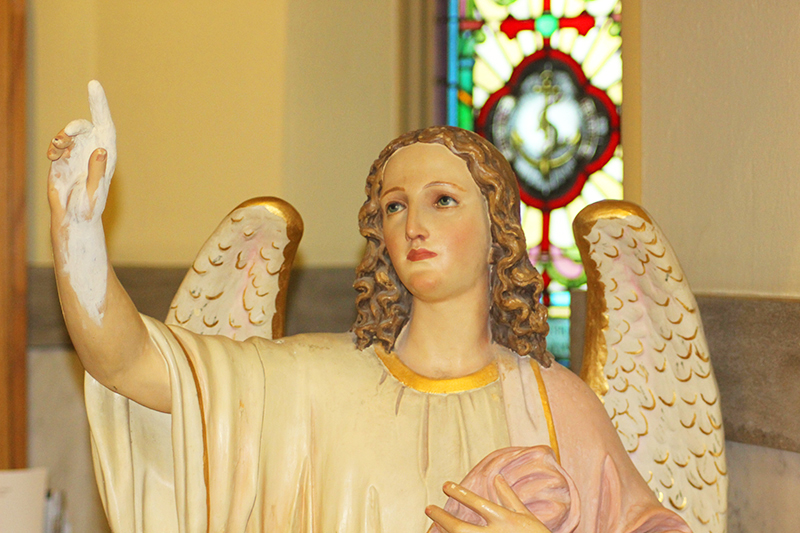 A repaired statue of the archangel Gabriel welcomes visitors at St. Gabriel Parish in Philadelphia. Once discarded, the figure became a parable in plaster at a Sept. 28 Mass, at which parishioners reflected on hope amidst the clerical abuse scandals. (Photo by Gina Christian)

At a parish in Philadelphia’s Grays Ferry section, a patron saint’s feast — and a broken angel statue — became signs of healing for a church wounded by the ongoing clerical abuse scandal.

More than 100 parishioners gathered at St. Gabriel’s Church on Sept. 28 for a vigil Mass in honor of the archangels Michael, Gabriel and Raphael. The three saints, each referenced in Scripture, are respectively associated with divine protection, good news and healing.

“Gabriel is a particularly important patron now, because there’s so much bad news,” said Father Carl Braschoss, a Norbertine priest who was recently appointed pastor of the parish.

In his homily, Father Braschoss noted that moments of darkness and conflict, when faced honestly, can serve as opportunities for experiencing God’s profound grace.

“Even the smallest of these can be a gift through which we learn to work together,” he said.

Prior to the Mass, parishioners wrote notes giving thanks for the blessings in their lives. The papers were presented in a basket during the offertory procession, and Father Braschoss read several of them aloud, adding that “God wants to transform us as much as he wants to transform bread and wine.”

A newly installed statue of the angel Gabriel reinforced the evening’s theme of resurrection and renewal. Discarded for some 15 years, the figure — covered in Christmas-themed fabric — was rediscovered this summer by Father Braschoss in the boiler room of the convent basement.

The angel’s right arm, which was missing from the statue, was later found in a separate box. Although damaged, the limb was reattached, rendering the figure an image of scarred beauty.

“It’s a symbol of our own personal brokenness, and of the brokenness in our church,” said Sister Rose Marie Adams, I.H.M., the parish’s pastoral assistant and director of religious education. “This statue validates that God’s grace is strong, and we can through that grace heal and be healed.” 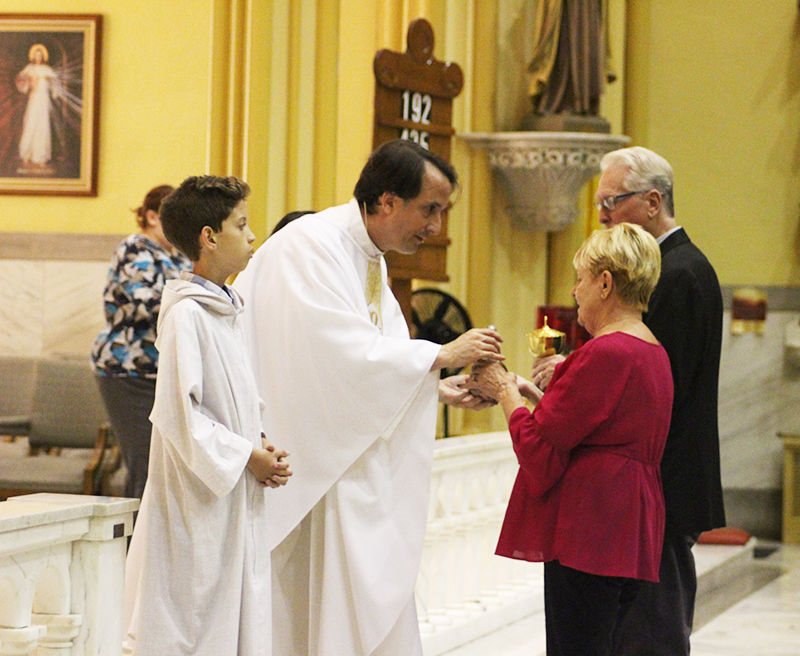 Father Carl Braschoss, O. Praem., pastor of St. Gabriel’s Parish in Philadelphia, receives the offertory gifts at a Sept. 28 vigil Mass, assisted by Aidan Anderson-Frisario. At the celebration, which marked the feast of the archangels, parishioners were invited to reflect on specific signs of hope and blessing in their own lives. (Photo by Gina Christian)

The statue was placed in the church’s “welcoming cove,” an area near the entrance that contains information about parish life, sacraments and spirituality. Father Douglas McKay, who concelebrated the Sept. 28 Mass, pointed out that the cove once held the church’s baptismal font.

“St. Gabriel is also the angel of baptism,” said Father McKay, who grew up in St. Gabriel Parish. “There are no coincidences.”

As the founder of Our House Ministries, a recovery outreach adjacent to the church, Father McKay has spent over 40 years working to address the neighborhood’s longstanding battle with addiction. In a post-communion reflection at the Mass, Father McKay said that the angels provided constant guidance and inspiration for his ministry.

“They’re all around us, and they love us,” he said.

Unlike the church’s other statues, the reclaimed figure of Gabriel has intentionally been placed on the floor, rather than mounted to one of the walls.

“St. Gabriel is on our level, accessible to us,” said Sister Adams.

That same spirit of accessibility drew parishioner Rashidah Anderson and her family to St. Gabriel’s. A former Pentecostal Christian, Anderson attended an evangelization event after spotting a banner on the church fence. The warm welcome she experienced “cemented” her decision to join the parish.

“I’d actually received some pretty devastating news that day,” she recalled. “And no one knew who I was, but they just kind of took me in and grouped around me.”

Anderson was received into the Catholic Church in April 2017 during the parish’s Easter vigil. Her son Aidan, now 11, made his first holy Communion that same evening. A regular altar server who assisted at the Sept. 28 Mass, Aidan is discerning a vocation to the priesthood, and has already memorized the order of the Mass.

“He actually lit the fire for me personally,” Anderson said. “We gave him the choice, and he chose to be Catholic. His passion for the faith inspired me.”

Anderson’s husband, Roger Frisario, said that despite the devastating clerical abuse crisis, the Catholic faith “has a lot to offer the world.”

“We have to embrace what happened, but also move forward in a positive manner,” said Frisario, a lifelong Catholic. “We could definitely rise and be a better church than we ever were. Out of ashes, good things can come.”

Father Braschoss — who often sits on the church steps to invite passersby to Saturday confessions — agrees.

“The good news that’s already present is what really attracts, and we’re not just here on Sunday talking; we live it,” he said. “And that’s what makes us a relevant, in-the-trenches church.” 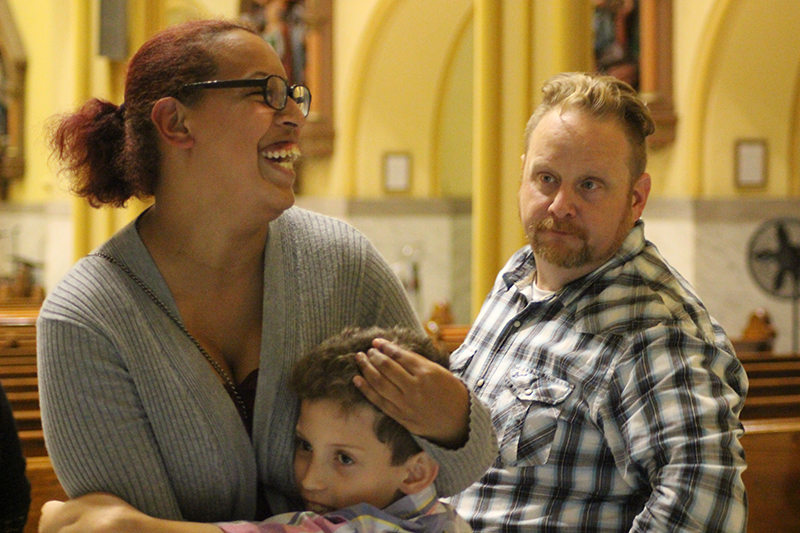 Rashidah Anderson, Roger Frisiano and their son, Aidan, relaxed at a reception following a Sept. 28 Mass at St. Gabriel’s Parish in Philadelphia. (Photo by Gina Christian)