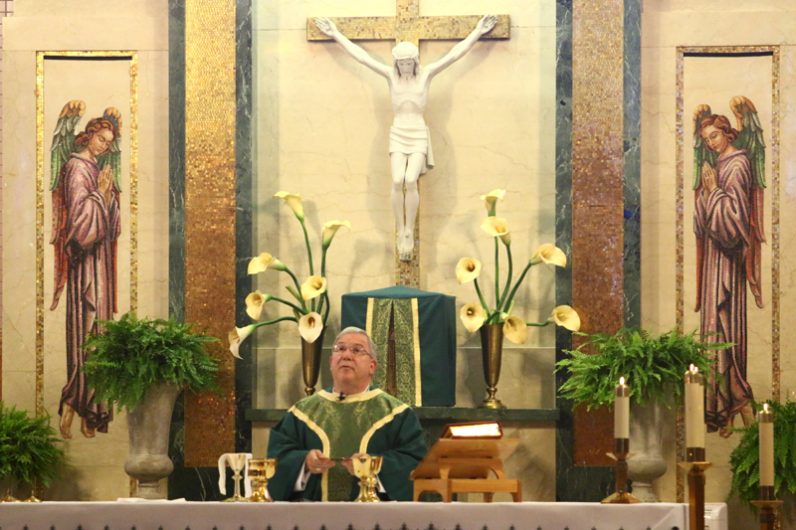 Bishop Joseph Cistone celebrates Mass for the 100th anniversary of Our Lady of Consolation Parish in October 2017. (Photo by Sarah Webb)

Philadelphia priests and members of St. Charles Seminary’s Class of 1975 remember their most distinguished classmate, Bishop Joseph Cistone, who died Oct. 16 in Saginaw, Michigan, where he was bishop since 2009. Read CatholicPhilly.com’s extensive obituary of the bishop, plus more remembrances, here.

Msgr. David Benz not only became a friend of the future Bishop Cistone, he recalls going to Tacony to play pinochle with his family.

“In the seminary his nickname was ‘Cisto.’” He also remembers when Bishop Cistone went to Saginaw he had a Honda but couldn’t use it there because in the loss of the auto industry there was so much bad feeling about foreign cars.

“If he was anything, he was honest,” Msgr. Benz said. “He had a hard time in Saginaw at first because of the parish consolidations, but he won the people over and they loved him. The renovation he did of the cathedral is beautiful.”

Msgr. Ralph Chieffo recalls, “Joe was very close to his family and it taught him to treat everyone with respect. He did this with his peers, in administration and with the people. He was very compassionate. I think that came from his warm Italian family.

“Over the years if I needed encouragement when I was building my church he would say, ‘Do your best Ralph, we are behind you.’ With the scandal and everybody blaming him, we told him, ‘we are behind you.’ He really carried the cross of his responsibility. He was a compassionate gentleman who helped everybody.”

Msgr. Joseph Corley remembers the future Bishop Cistone as “a good student. He had good relations with people, always friendly. He had a great speaking voice, like a professional actor.

“He had wonderful, wonderful parents who would send his classmates birthday cards, Christmas cards, graduation cards. He could be serious and with some of the things that happened I don’t think he enjoyed it. There was a lot of stress in his work.

“He was very good at confirmations. Sometimes he would tell the children, ‘When I was little my mother would tell me to wear a hat because it was cold and I didn’t want to.’ He would point to his miter and say, ‘Now I have to wear a hat all the time.’”

Msgr. Thomas Dunleavy remembers as a seminarian, Bishop Cistone “had an easy disposition and always tried to look at the bright side of things. He was even-keeled and a joyful person. Back in those days he was involved in the Charismatic movement and he always said it expanded his spirituality.

“Even after he was transferred to Saginaw he would always come back for our reunions; we would plan them for the time he could be there. I followed him at St. Bernard’s and I heard many stories about what he did there. He had great administrative skills and abilities.”

“He had great experience in parish ministry and that is where most of the men would go. As a formator he was very gentle and principled. It was integrated formation – human, pastoral and spiritual outside of the classroom. Later he went through a lot; parish consolidations and taking care of people’s needs. He was a great gift to the church.”

NEXT: ‘Gosnell’ movie got the untold story right, says writer who covered trial