Franciscan sister, active in teaching and parish ministry, dies at 100 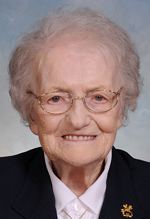 She had been a professed member of the Sisters of St. Francis of Philadelphia for 80 years. Sister Angela Patrice (nee Kathleen Mary Power) was born in Dungarvan, County Waterford, Ireland. She entered the congregation in 1935 and professed her first vows in 1938. Her sister, Sister Eileen Marie Power, was also a member of the congregation and is already deceased.

Sister Angela Patrice earned a B.S. in history from Mount St. Mary University in Emmitsburg, Maryland. During her years in active ministry, she ministered in education, eldercare and parish ministry.

Sister Angela Patrice ministered for 38 years in the Archdiocese of Philadelphia where she initially served as administrator of Assisi House, the congregation’s retirement residence in Aston. She later worked in parish ministry at St. Joseph Parish in Aston.

In 2005 she was honored by the parish for her many contributions to the life of the parish and for her efforts in collecting more than $10,000 for the new church through her “Loose Change for the Church” campaign. In 2001 she became a resident of Assisi House and served in prayer ministry until her death.

Sister Angela Patrice ministered for 20 years in the Diocese of Wilmington. During her early years there, she taught at St. Paul School. She later served as principal of both St. Thomas School and St. Ann School.

Sister Angela Patrice’s eight years of ministry in the Archdiocese of Baltimore included teaching at both St. Paul School and St. Katharine School. Additional ministry experience included working in formation at Immaculata Convent in Mallow, County Cork, Ireland; teaching at Our Lady of Lourdes School in Bethesda, Maryland; and serving in parish ministry at Our Lady of Isle Parish, Shelter Island, New York.

Her funeral Mass was celebrated Sept. 19 at Assisi House. Burial was in Our Lady of Angels Cemetery in Aston.

Sister Angela Patrice is survived by her nieces and nephews, and by her Franciscan family. Donations in her name can be made to the Sisters of St. Francis Foundation, 609 S. Convent Road, Aston, PA 19014.