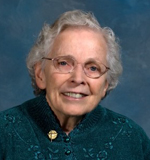 Daughter of the late Patrick Joseph and Bridget (McGuiness) Campbell, she was born in Philadelphia and attended Holy Cross Grade School and Little Flower High School. She entered the Sisters of St. Joseph in September 1952 and professed her final vows in August 1960.

Sister Inez Patricia ministered in the archdioceses of Philadelphia and Washington, and the dioceses of Camden and Harrisburg.

Her funeral Mass was celebrated Aug. 28 at St. Joseph Villa.

She is the sister of Michael Campbell, Kathleen Campbell and the late James Campbell. She is survived by nieces and members of her Congregation, the Sisters of St.Joseph.

NEXT: Sister Genevieve Murray, ministering in health and education, dies at 94