John Gagliardi dies at 91; was winningest college football coach ever 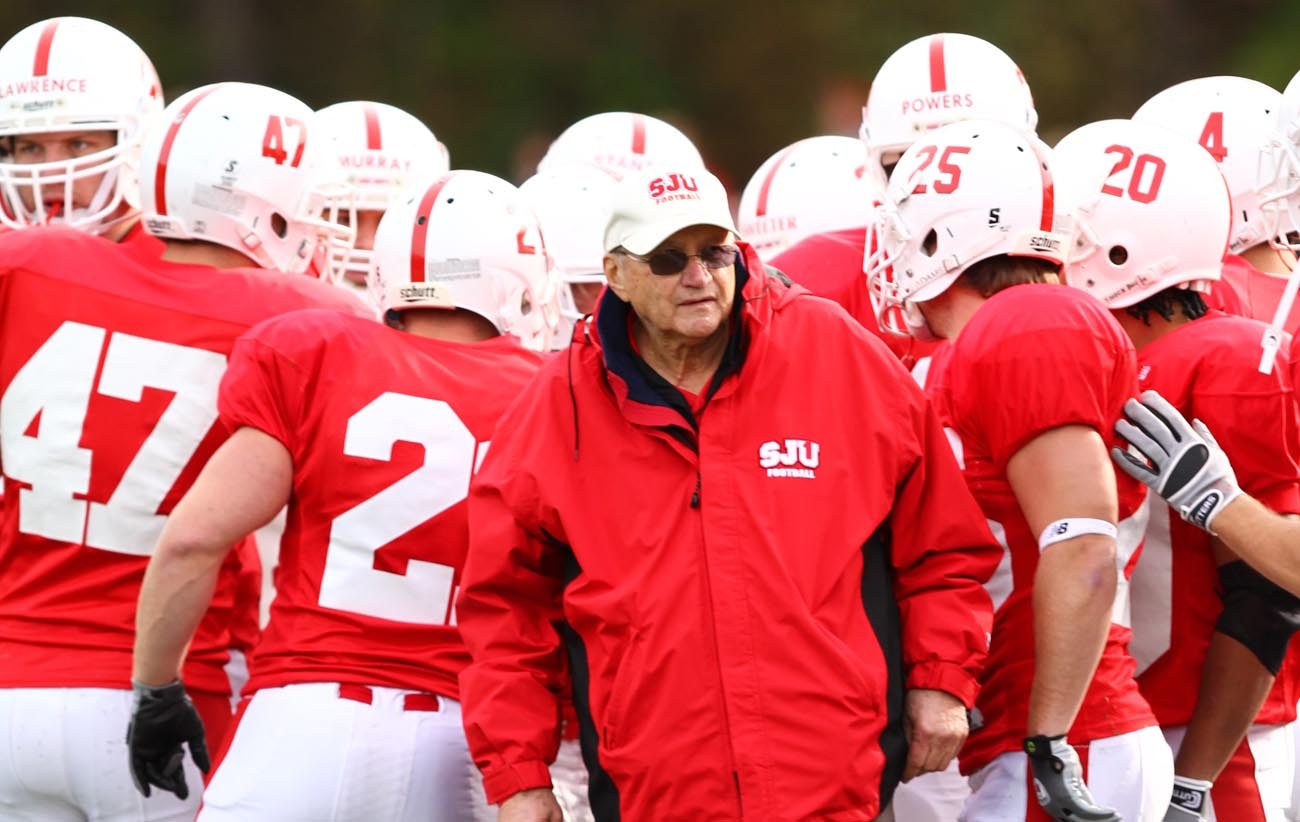 John Gagliardi, former head football coach at St. John's University in Collegeville, Minn., is seen in 2009. Three years prior he became the first active coach to be elected to the College Football Hall of Fame. (CNS photo/Dawid Chabowski, courtesy SJU)

ST. CLOUD, Minn. (CNS) — What must the opposing football team have thought when they began their vigorous calisthenics before the game while the St. John’s University Johnnies were stretched out on their backs glancing up at the heavens?

John Gagliardi didn’t care much what anyone thought about his unorthodox coaching methods. With 60 years of coaching football at St. John’s University in Collegeville, he had a record of 489-138-11 and won four national championships (two in NAIA and two in NCAA Division III).

Gagliardi is down in the books as the winningest college football coach of all time.

The esteemed coach, who retired in 2012 at age 86 and died Oct. 7 at 91, didn’t do anything extraordinary in his coaching, according to those who knew him. In fact, it was some of the simplest things that captured the most attention.

Instead of the usual calisthenics many teams partake in before a game, Gagliardi believed in appreciating the moment. He called it the “Nice Day Drill.” He would instruct the players to lay on the ground on their backs and notice the world around them — the cool breeze, the rustling leaves, the sky above.

Gagliardi also didn’t have a long list of rules to follow. There were no set times for “lights out,” no spring practices, no required time in the weight room, just one main rule, the Golden Rule: Treat each person as you wish to be treated.

Although the Golden Rule is typically attributed to the Gospel of Matthew, Gagliardi didn’t talk much about his faith. He didn’t need to. He lived it out in everything he did.

“He may not have preached from the Bible, but his faith was a huge part of who he was,” his daughter, Gina Benson, told The Visitor, newspaper of the Diocese of St. Cloud. 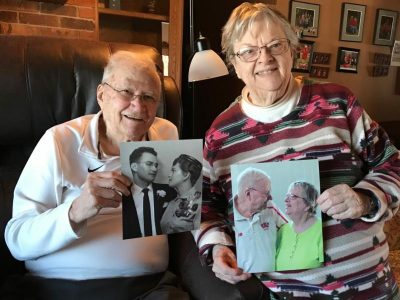 John Gagliardi, former head football coach at St. John’s University in Collegeville, Minn., and his wife, Peggy, pose with their wedding photo and a more recent photo of them in the same pose. (CNS photo/courtesy Gagliardi family)

Born the son of Italian immigrants, Gagliardi grew up during the Great Depression. He learned to appreciate simple things and to recognize God’s presence in the world around him. Benson recalls the sheer delight he’d take in the most ordinary things.

“When we were kids, he would hold up a banana and he’d say, ‘Look at this banana. It’s perfect. Isn’t it beautiful? I mean, look at this. God made this marvelous tasting fruit with a cover that protects it perfectly. But look at it, it’s just easy to open. God designed it with perfection,'” she said.

“He was awestruck by the world,” Benson continued. “That’s what everybody will tell you when you’re in a room with him. You spend time with him and you feel this insane amount of appreciation because he appreciates people and that’s the way he was with God. He just appreciated anything he thought was part of God’s world. Growing up with that atmosphere, you just felt like God’s gifts were everywhere.”

Gagliardi played football in high school and coached a high school team while getting a degree from Colorado College. Just 22 years old, he became head football coach at Carroll College in Helena, Montana.

Benson loves to recount a favorite story of her dad’s from those days at the small Catholic college.

“At that time, he coached everything — basketball, football, baseball and track, and he had no assistants. One day, he was over by the football field and he saw a young man kicking a football. He went down and said to this kid, ‘Who are you and why can you punt that football and I want you on my team.’ The guy said he couldn’t play on this team because he was a graduate of Helena and he was now a priest.”

Gagliardi asked the man to help him coach. Again, the man declined. But Gagliardi was persistent. Eventually, the man became his assistant coach in both football and basketball. That man later became Archbishop Raymond Hunthausen of Seattle. The two remained lifelong friends. Archbishop Hunthausen died in June.

At 26, Gagliardi accepted the head football coaching job at St. John’s and coached 60 seasons. In the early days, he lived on campus and the Benedictine monks of St. John’s Abbey became his friends.

Benedictine Brother Mark Kelly, who cared for the abbey’s grounds for 57 years — including some work on the football field — was one of Gagliardi’s best friends. He visited Gagliardi the night before he died.

“I always felt like a member of the family,” Brother Mark said. “I knew John’s parents and attended his kids’ sporting events. And his wife, Peg, was an incredible cook. I really felt like part of their family.”

“Some people thought all he wanted to talk about was football, but he was rehearsed in what was happening in the world. He was a very intelligent man,” Brother Mark said. “He was a great man. I will miss his company, his wisdom. He was a true friend.”

Gagliardi is survived by his wife, his four children, 19 grandchildren and 13 great-grandchildren. His funeral Mass is to be celebrated Oct. 15 at St. John’s Abbey Church in Collegeville. Inurnment will be in the parish cemetery.

All four Gagliardi children had Catholic education from elementary school through college. “It was important to him that we attend Catholic schools. He appreciated that opportunity for us,” Benson said.

“The other thing I learned from him was how he lived a life of forgiveness. I heard him all his life saying, ‘I’m sorry.’ He’d say it to my mom often,” she said.

Benson said the greatest lesson she learned from her father was how to treat a spouse.

“He totally appreciated everything about everyone but especially my mother. Appreciation wasn’t enough for him. When he appreciated, he complimented. She was at the receiving end of compliments constantly.”

Benson said his example did two things: It made a better marriage, and it also gave others a witness of how a spouse should be treated. In his obituary, the tribute reads, “In lieu of flowers, make an effort to do what was effortless for John: Compliment your spouse often, listen intently to others and see the best in all.”

Anderson is a multimedia reporter for The Visitor, newspaper of the Diocese of St. Cloud.

NEXT: Brewers chaplain finds joy in connecting his love of priesthood, sports