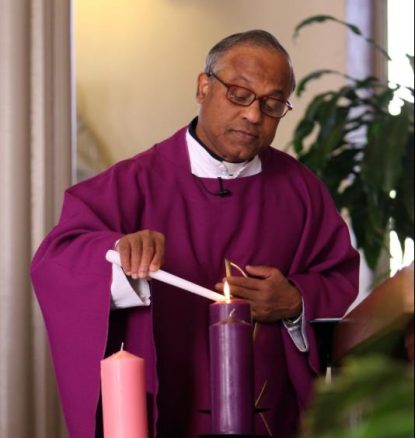 A priest lights a candle in a wreath on the first day of Advent. Advent, a season of joyful expectation before Christmas, begins Dec. 2 this year. The Advent wreath, with a candle marking each week of the season, is a traditional symbol of the liturgical period. (CNS photo/Gregory A. Shemitz)

When the verses from Chapter 33 of the Book of Jeremiah are read as the first reading on the First Sunday of Advent this year, I will hear them in a new way.

The prophet’s words, “The days are coming, says the Lord, when I will fulfill the promise I made,” will resonate with special meaning for me and the entire parish at St. John XXIII.

For us a promise fulfilled is a reality. A new beginning has come upon us.

This Advent our parish will celebrate Mass in a brand-new church that has been the dream of the parish for many years. Founded in 2005, our parish used a public high school, several Lutheran churches and a parish life center for Mass and all other liturgical celebrations like weddings, funerals, first Communions and baptisms until this fall.

After years of planning and fundraising we completed the building in time for St. John XXIII’s feast day on Oct. 11. That day, which marks the anniversary of the opening of the first session of the Second Vatican Council, offered both promises fulfilled and promises of new beginnings.

In our case, the promise fulfilled is not merely about a needed building. In fact, it is much closer to the promise proclaimed by Jeremiah. For us, we have the realization that we are truly and formally established as a church community with a mission.

Our new building with tall, clear glass windows on all sides, but especially in the tower, allows our people to reflect on the image of a lighthouse. More significantly, we find ourselves reflecting on Matthew 5:14, that we as a community have to be light to the world.

Reaching this point is the fulfillment of what we long for. Yet, as we enter Advent, we discover that this is a beginning, not an end.

Advent, with its theme of promises, also is the beginning of a liturgical cycle. It is a time when the church starts all over again. And although the time for all promises to be fulfilled may only come with the final return of the Lord, we start over with anticipation, expectation and strong commitment.

Beginnings are both exciting and challenging. The Catholic Church often introduces new liturgical practices with the First Sunday of Advent.

Seven years ago, with the First Sunday of Advent, the English-speaking church introduced a new translation of Mass prayers. Many will remember the challenge of helping people adjust to new phrases right before Christmas.

With much less public awareness, we used Advent two years ago as the time to introduce a new rite for the sacrament of marriage. In that case, it was during “low wedding season” and there was time to help couples prepare. And every year our church begins a new year of the three-year cycle of readings from the Bible, this year with emphasis on Luke.

Advent should not be seen simply as a time for changes of rites or rubrics or Gospel readings. It truly is a time for the church to declare a new beginning for ourselves as we trace the story of our salvation. Such beginnings are future-oriented even as they connect with the past.

The theme of promises fulfilled is both past and present. As people of faith we have received the ultimate promise from God, namely, salvation and hope for the world. Jeremiah reminds us it will come to pass, and that is the future element.

The First Sunday of Advent provides the big picture with a look to the second coming of Jesus as Luke (Chapter 21) declares signs that the Son of Man will come with redemption. The next three Sundays will look back at the first coming of Jesus in human form.

For us, in the middle, we build off the past to address the future. As we start over again, we realize we are not the same persons who started over last year or the previous year. Each new beginning is like the inward spiral that brings people closer to the center. Perhaps the promise is that as we near that core, we will find the message of hope more pronounced.

Meanwhile, however, St. John XXIII Parish has its own challenge. Having established ourselves in the long-awaited church building, we dare not assume we have reached the culmination of the Gospel. We cannot rest. Advent calls us to see beyond the building and look at the bigger picture, namely that Jesus is among us, bringing salvation.

A couple of weeks before the completion of the church construction, the large sculpture of Jesus, ready to be mounted on the wooden cross, was delivered to the church. As it lay there waiting for the workers to position it, some members of our parish approached and looked at the image of the crucified Lord.

There was complete silence as they stared. This was followed by spontaneous sobbing from each person. Later one of the women said her heart was overwhelmed and she was moved by this reminder of redemption.

Salvation truly is at hand; promises are being fulfilled. With Advent we move closer to the reality of this mystery.

PREVIOUS: Three Advent traditions to slow you down this season

NEXT: Advent, a season to ready the way of the Lord