Consumerism is the enemy of generosity, pope says 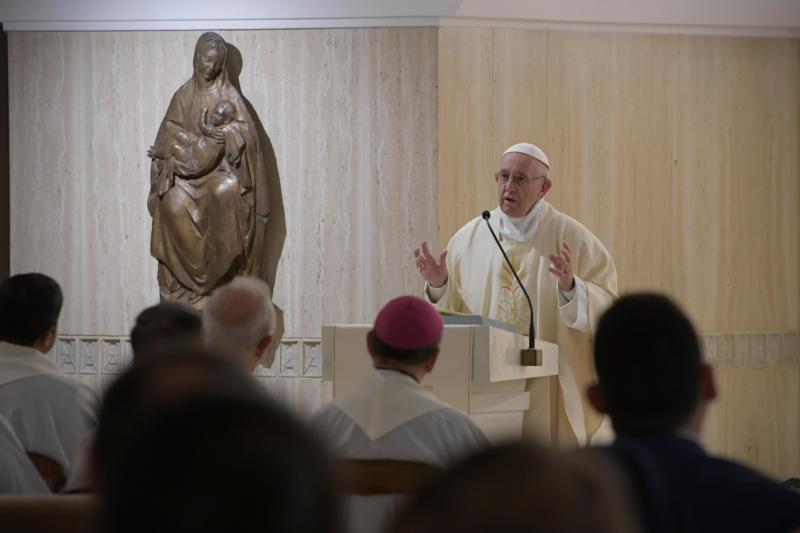 Pope Francis gives the homily as he celebrates morning Mass in the chapel of his residence, the Domus Sanctae Marthae, at the Vatican Nov. 26. (CNS photo/Vatican Media)

VATICAN CITY (CNS) — The desire to spend vast amounts on shopping and needless extravagances can prevent Christians from being generous with others, Pope Francis said.

“Consumerism is a great disease today. I am not saying that we all do this, no. But consumerism, spending more than we need, is a lack of austerity in life; this is an enemy of generosity,” the pope said Nov. 26 during Mass at Domus Sanctae Marthae.

In his homily, the pope reflected on the day’s Gospel reading from St. Luke in which Jesus noticed wealthy people placing their vast offerings into the treasury while an old widow makes an offering of two small coins.

“I tell you truly, this poor widow put in more than all the rest; for those others have all made offerings from their surplus wealth, but she, from her poverty, has offered her whole livelihood,” Jesus said.

The pope said Jesus often spoke about and compared the behaviors of the rich and the poor, for example, in his parable of the poor man Lazarus or his encounter with the rich young man.

Jesus’ assertion that it is difficult for a rich man to enter the kingdom of heaven may cause some to “label Christ as a communist, but the Lord — when he said these things — knew that behind wealth there was always an evil spirit: the lord of the world,” he said.

The poor widow in the Gospel reading, he continued, “gave the little she had” because she trusted God and knew that “the Lord is more than everything.”

Pope Francis said Christians today wondering if their small deeds or acts can help relieve social ills such as poverty and hunger are no different than the widow and the two coins she gave as an offering.

“It’s the little things. For example, take a trip to our rooms, let us go to our closets. How many pairs of shoes do you have? One, two, three, four, 15, 20 … everyone can answer. A bit too much. I knew a bishop who owned 40 pairs. But if you have so many shoes, give half,” the pope said. “It is a way of being generous, of giving what we have, of sharing.”

Pope Francis called on Christians to be generous with those in need and to pray to God “so that he can free us from the dangerous evil of consumerism” which is “a psychiatric disease” that can enslave.

“Let us ask for this grace from the Lord,” the pope said, “this generosity which broadens our hearts and leads us to magnanimity.”

PREVIOUS: Readings of the Holy Mass – Solemnity of Our Lord Jesus Christ, King of the Universe

NEXT: Everyone’s hour will come, so be prepared for Judgment Day, pope says