To enter the kingdom of God, we first enter the desert

Growing our hearts this Lent through a ‘spiritual game plan’

Becoming a missionary disciple through Lent

Lent turns us inside out to set us straight

Sacraments are not for sale, pope says at Mass 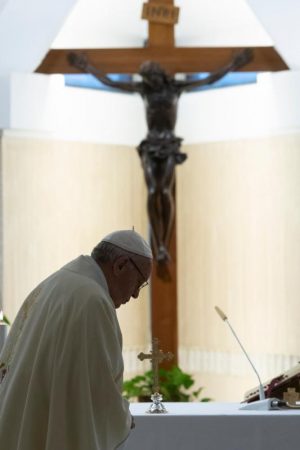 Pope Francis celebrates morning Mass in the chapel of his residence, the Domus Sanctae Marthae, at the Vatican Nov. 9. (CNS photo/Vatican Media)

VATICAN CITY (CNS) — The sacraments are gifts from God that are given freely and are not a way for the church to fill up its coffers to cover expenses, Pope Francis said.

“Sometimes,” he said, “I have seen — not here in Rome, but in another area — I saw a list of prices” for the sacraments, the pope said. If someone wants to give an offering, “they should put it in the poor box, secretly, so that no one can see how much they have given.”

In his homily at his early morning Mass Nov. 9, the pope reflected on the day’s Gospel reading from St. John, in which Jesus drives the money-changers and merchants from the temple.

“Take these out of here and stop making my father’s house a marketplace,” Jesus said.

Pope Francis said Jesus’ action was prompted by the presence of “idolaters,” people who were enslaved by “the idol of money.”

“This calls for our attention and makes us think about how we treat our temples, our churches; if it is a house of God, a house of prayer, of encounter with the Lord” or “if it resembles a marketplace,” the pope said.

The pope also warned that the temptation of worldliness that can turn a solemn celebration of the sacraments into a social gathering.

“Let us think about the celebrations of some sacrament where you go, and you do not know if it is a place of worship, the house of God, or if it is a social hall,” he said. “It is true that celebrations must be beautiful, but not worldly, because worldliness derives from the god of money. It is also an idolatry.”

Recalling St. Paul’s first letter to the community in Corinth, in which he states that the heart is a temple of God, Pope Francis said Christians today should search their hearts and ask themselves which master they truly serve.

PREVIOUS: Jesus calls all to live in the kingdom of God

NEXT: Bishops must be blameless servants, not princes, pope says