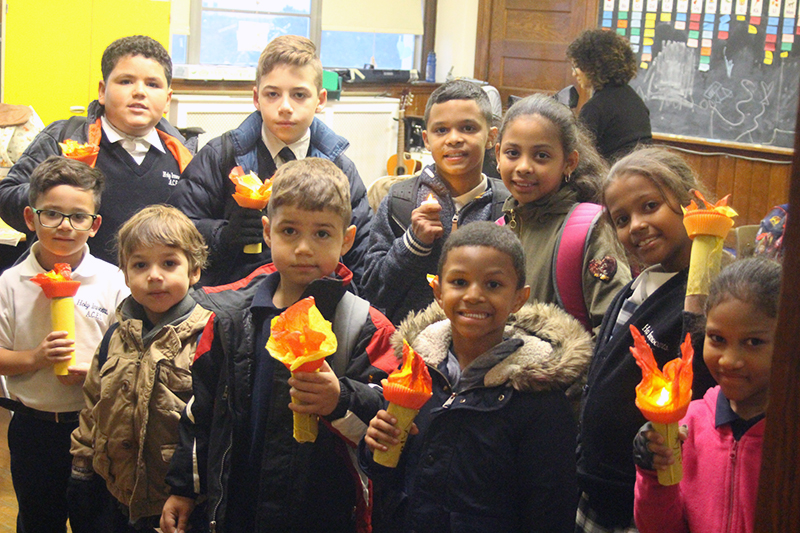 Students of the archdiocesan Out of School Time program at Holy Innocents marked “Lights On Afterschool” with torches made from craft supplies. The annual event, which was celebrated on Oct. 25 throughout the U.S., underscores the importance of aftercare programs in youth development. (Photo by Gina Christian)

Launched in October 2000 by the Afterschool Alliance, the annual event celebrates the importance of afterschool programs in promoting youth safety and development.

“A lot of times, people just think of us as babysitters,” said Jennifer Hicklin, director of the archdiocesan Out of School Time (OST) program at Edwin Forrest School in Northeast Philadelphia. “But it’s more than that.”

Hicklin heads up one of 12 OST sites throughout Philadelphia operated by Catholic Social Services (CSS). Established more than 20 years ago, the year-round OST program serves between 700 and 900 at-risk children and teens in grades K through 12 with an array of academic, recreational and social support services. A blend of public and private partnerships funds the outreach.

According to a November 2017 report, afterschool programs – which emerged during the early 20th century – have been shown to improve school attendance, interpersonal skills and academic performance.

In the city’s Olney section, for example, St. Helena’s OST students created lava lamps for “Lights On” to demonstrate their research on the difference between bioluminescence and fluorescence.

Hicklin used the event to build on her site’s project-based learning about rocket technology.

A few weeks earlier, students had utilized the reaction of baking soda with vinegar to launch small containers. “I went home reeking of vinegar,” laughed Hicklin.

Light saber in hand, she extended the lesson from the scientific to the social, explaining how the “Jedi Code” — the ethical principles that guided several Star Wars characters — could be applied to modern conflict resolution.

“Yoda is my favorite character,” said Michael, a 9-year-old student at Forrest OST. “He’s the best one out of all of them; smart, patient and cute.”

The event also gave kids a chance simply to relax and have some old-fashioned fun. At the nearby Northeast Family Service Center OST, kids celebrated “Lights On” with more traditional activities, such as bingo.

“They love it,” said director Kara Wisniewski. “They see the big electronic bingo board every day, but they know we only use it for special occasions. And of course they want to win prizes.”

“The goal is to get the families to recognize that we’re all in this together,” said Dee D’Aulerio, director of the OST program at Holy Innocents Parish.

Students at that site created homemade torches from craft paper, illuminated by battery-operated candles. Symbolically passing the flame from one torch to another, the group sang and chanted several themes for “Lights On.”

D’Aulerio noted that the Holy Innocents site – like many afterschool programs throughout the nation – is at capacity with a long waiting list, highlighting the need for more investment in such outreaches.

“We’re all family” in caring for the nation’s youth, D’Aulerio said, adding, “We need them, and they need us.”