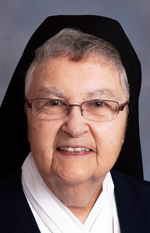 She was born in Philadelphia in 1932, entering the Congregation of the Sisters, Servants of the Immaculate Heart of Mary in 1950 from St. Martin of Tours Parish. She professed her vows on April 5, 1953.

Sister Honora taught in various elementary schools in the Archdiocese of Philadelphia. She also served the IHM community at Villa Maria House of Studies from August 1995 through August 2001; then again from August 2004 through August 2012 before being assigned to the Apostolate of Prayer in Camilla Hall in 2012.

The funeral Mass was celebrated Oct. 31 at Camilla Hall. Msgr. Joseph Logrip was the celebrant and homilist. The concelebrants were Father William E. Dean and Msgrs. Stephen P. McHenry and William J. Lynn.

In addition to her congregation of IHM Sisters, Sister Honora is survived by many loving nieces, nephews, grandnieces, and grandnephews. She is predeceased by her parents James and Mary Ann Holland Fraties, and her brother James (Elizabeth).