Ask for grace to dream and to be silent like St. Joseph, pope suggests 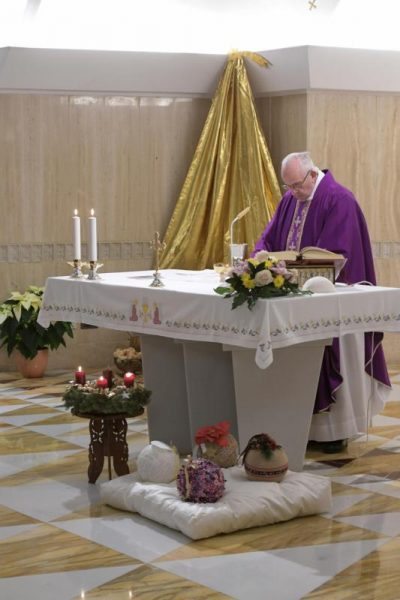 Pope Francis celebrates Mass Dec. 18 in the chapel of the Domus Sanctae Marthae, where he lives. On a cushion in front of the altar are Christmas decorations made for him by Slovakian children with disabilities; during the Mass, the pope offered a special prayer for them. (CNS photo/Vatican Media)

VATICAN CITY (CNS) — While St. Joseph was a practical, down-to-earth man, he had enough faith to be open to God speaking through dreams, Pope Francis said at morning Mass.

“Joseph had his feet on the ground. But he was open-minded,” the pope said Dec. 18 during his homily at Mass in the Domus Sanctae Marthae.

On a cushion at the base of the altar were four large Christmas ornaments made for the pope by Slovakian children who have disabilities.

“They made them with their own hands,” the pope said at the beginning of Mass. “I thought the Lord Jesus would like having them here.”

The day’s Gospel reading (Mt 1:18-25) recounted how Joseph, being a righteous man, wanted to quietly break off his relationship with Mary when he found out she was pregnant, but was told in a dream that the child was conceived through the Holy Spirit and he should marry Mary.

The Gospels recount Mary saying yes to God, the pope noted, but with Joseph, the story simply says that “he did as the angel of the Lord had commanded him.”

While many dreams are just the dreamer’s subconscious speaking, the pope said, other dreams can be “a privileged place to seek after truth because there we cannot defend ourselves against the truth. They come, and God speaks through dreams.”

“Joseph was a man of dreams, but not a dreamer,” he told the small congregation at the Mass. “He wasn’t abstract” and did not have “his head in the clouds.”

Pope Francis told people at the Mass to ask St. Joseph to help them obtain “the grace to know how to dream by always seeking God’s will in dreams and also the grace to accompany others in silence without chatter.”

Noting how the Gospels do not record anything St. Joseph ever said, Pope Francis said Joseph helped Jesus grow and develop. “He looked for a place for the child to be born. He cared for him, helped him grow and taught him a skill … in silence.”

St. Joseph never acted like Jesus was “his,” the pope said. “He silently let him grow. He let him grow: This idea could help us immensely, we who by nature always want to stick our noses in everything, especially in the lives of others.”

Sometimes, he said, parents see their children do something they wish they hadn’t done, but they hold their tongues and wait for the right moment to speak.

“They don’t yell right away. No, they wait for an opportunity to say something that will lead to growth,” he said.

God is like that, too, he said. He is patient and allows his children to learn.

PREVIOUS: Lives of faith, hope and joy prepare us for the Messiah

NEXT: Fear, anger and love at Christmas