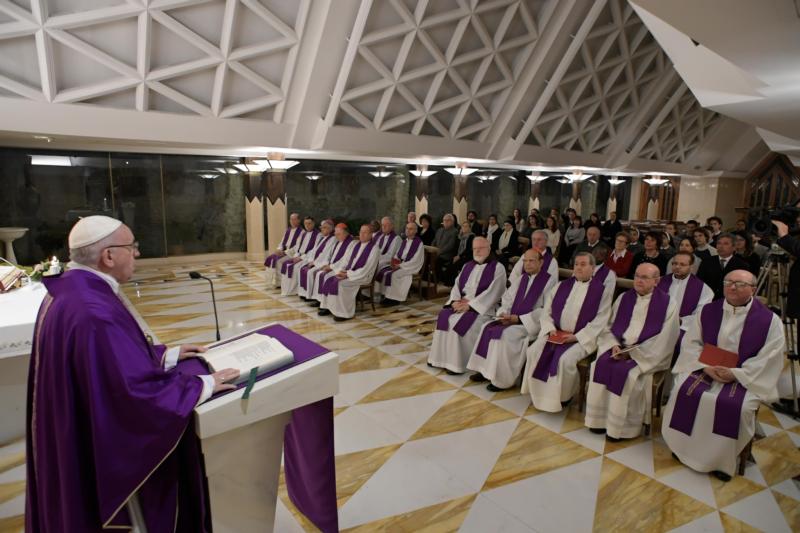 Pope Francis delivers the homily as he celebrates morning Mass in the chapel of his residence, the Domus Sanctae Marthae, at the Vatican Dec. 11. (CNS photo/Vatican Media)

VATICAN CITY (CNS) — God sends his consolation to those in need of reassurance, even when they are facing death, Pope Francis said.

Just like the early Christian martyrs, who sang as they marched to their deaths in the Colosseum, today’s martyrs still give witness to that same joy in the midst of suffering, the pope said in his homily Dec. 11 during morning Mass at Domus Sanctae Marthae.

“I think of the good Coptic workers on the beach of Libya, slaughtered. They died saying, ‘Jesus, Jesus!’ There is a consolation within, a joy even in the moment of martyrdom,” he said.

In his homily, the pope reflected on the day’s first reading from the prophet Isaiah, in which God sends his messenger to “give comfort to my people” and “speak tenderly to Jerusalem.”

This tenderness, the pope explained, is “a language that the prophets of doom do not know.”

“It is a word erased from all the vices that drive us away from the Lord: clerical vices, the vices of a few Christians who do not move, who are lukewarm. They are afraid of tenderness,” he said.

However, tenderness is precisely what God uses to console his people, like a shepherd who carries a lamb or a mother comforting her child, the pope said.

Pope Francis called on Christians to prepare for Christmas by praying for God’s consolation, especially in times of suffering, “because it is a gift from God.”

God, he said, “is at the door. He knocks so that we may open our hearts and let ourselves be consoled and be at peace. And he does so gently: he knocks with caresses.”

PREVIOUS: Advent teaches how to stay watchful before Christmas, and all year

NEXT: Confessing sins to a priest, who may be a sinner