Emmanuel: The name sums up the Christmas message 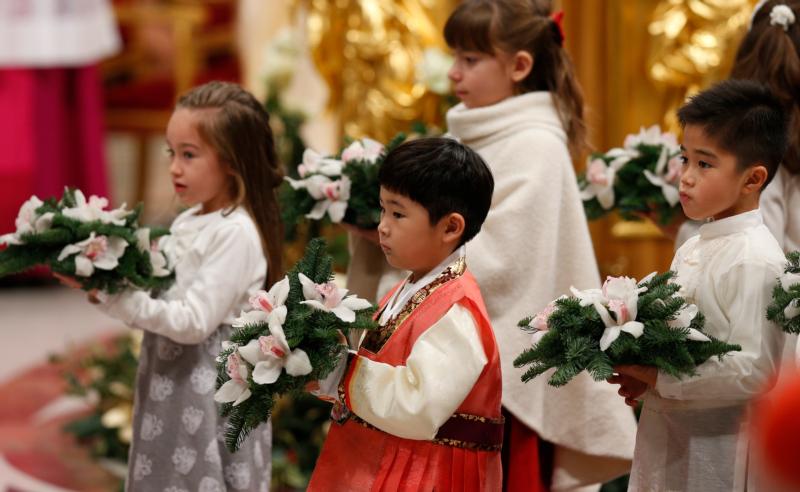 We know what kind of person the infant Jesus born on the first Christmas would be in adult life: someone known for drawing near to others and walking with them in their actual lives.

The Gospel of Luke shows the resurrected Jesus doing precisely that. He joins two disciples walking along a road toward the village of Emmaus near Jerusalem in the days after his passion, disciples troubled by what had happened and left with many unanswered questions.

“It happened that while (the two) were conversing and debating, Jesus himself drew near and walked with them,” though they did not at first recognize him, Luke says (24:15-16).

The experience of these disciples reveals that Jesus after the death and resurrection is not absent. Instead, he remains astonishingly active in this world. A name attached in Scripture to the newborn Jesus — Emmanuel — makes the point emphatically.

It may seem a great distance in time from Jesus’ birth to his crucifixion and resurrection, but a consistent message joins these diverse periods. The birth of Jesus reveals that God is not resting quietly in a far-off hideaway, but is present and involved wherever human lives unfold, no matter how complicated or turbulent life’s events may be.

The Gospel of Matthew, speaking of the befuddling issues Mary and Joseph confronted after he learned of her pregnancy before their marriage was finalized, comments:

“All this took place to fulfill what the Lord had said through the prophet: ‘Behold, the virgin shall be with child and bear a son, and they shall name him Emmanuel,’ which means ‘God is with us'” (1:22-23).

The message in the name Emmanuel is not incidental for Christians today, nor was it an inconsequential, passing reference in Matthew’s Gospel. As the New American Bible observes in a note, “for the Christian the Incarnation is the ultimate expression of God’s willingness to ‘be with us,'” truly to join with us in the flesh, that is.

In fact, the Gospel of Matthew both begins and ends with the message that God is with us. “Behold, I am with you always until the end of the age,” the resurrected Lord announces in the Gospel’s final words (28:20).

The Christmas message that God is with us is a point of much more than passing interest for contemporary Christian thinkers. Some have been at pains to explain how God could be present in the midst of our messy and, not infrequently messed-up, world. During life’s most painful, complicated or difficult times, some might doubt the truth of this message.

There are times when some feel as if God is absent and uninvolved with their lives, especially when their best-laid plans fail or when their hopes wither after running into a brick wall. But is it safe to assume that God can be found only where human lives unfold in utterly peaceful and well-balanced ways — that God only awaits our human gaze under the least turbulent of circumstances?

No doubt about it, silence supports prayer and the quest for God. Surely that does not imply, though, that God is not present, is not walking with people who are trying to cope with the chaos of human living and, often enough, not feeling good about it.

Curious believers want to know not just who or what God is, but what God does, how God acts. So to affirm, as the name Emmanuel does, that God is with us is to make a huge, far-reaching statement about the kind of God Christians reverence and rely upon.

This is not “a harsh, isolated God, but the God of Jesus Christ, the one through whom we encounter” God’s “tender, loving kindness,” Archbishop Diarmuid Martin of Dublin commented earlier this year. He said, “The harshness of our world needs that message.”

But if the Christmas message that Jesus is Emmanuel constitutes a stunning statement about the presence of the divine, it also clarifies what kinds of actions ought to punctuate his followers’ lives.

“In Jesus, God himself becomes Emmanuel, God-with-us, the God who walks alongside us, who gets involved in our lives, in our homes, in the midst of our ‘pots and pans,’ as St. Teresa (of Avila) liked to say,” Pope Francis remarked in a September 2015 homily in New York’s Madison Square Garden.

“Jesus still walks our streets,” and he “is part of the lives of his people,” the pope observed. Remaining aware of this, he suggested, changes us and changes how we regard others.

So the Christmas message prompts Jesus’ followers to learn to recognize his presence in others.

Pope Francis exhorted those he addressed in New York to structure their lives in light of this message. Go out into the city, he urged, and look for the face of Jesus in poor and suffering people. “Go out and meet others where they really are, not where we think they should be.”

The pope said, “Go out to others and share the good news that God our Father walks at our side.”

NEXT: At Christmas, take heart! God is with us!