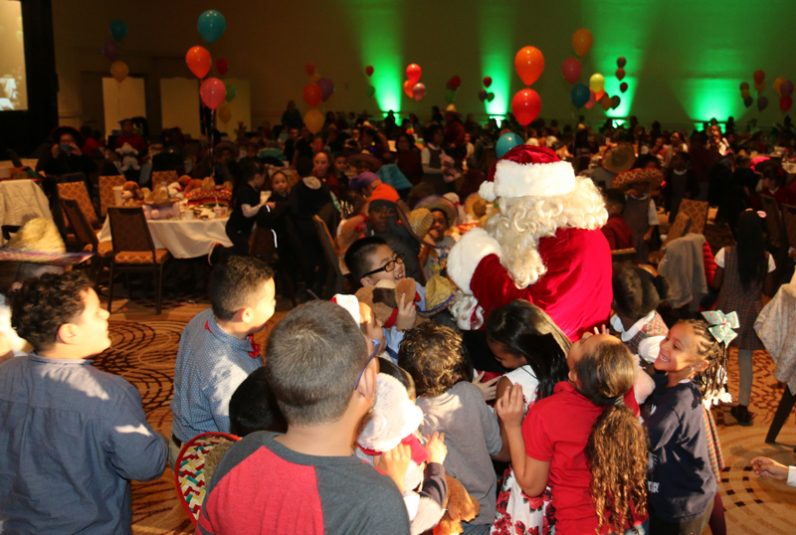 Santa Claus (aka Douglas Dunn) attracts a crowd of excited children as he made his entrance at the Archbishop’s Christmas Gala Dec. 18 at the Philadelphia 201 Hotel.

The Archbishop’s Christmas Gala for Children, a Philadelphia tradition dating back 63 years, definitely had a different accent this year. That would be a Spanish accent.

In keeping with this year’s Latin American theme and the tradition of Las Posadas, the commemoration of the journey of Jose and Maria from Nazaret to Belen, this journey began outside of the Archdiocesan Pastoral Center in center city Philadelphia where there was a Christmas pageant featuring students from St. Raymond of Penafort School and a number of live animals that may or may not have been found in ancient Palestine.

(See a gallery of three dozen photos from the party in our Photo Features section, here.)

After a greeting  and blessing from Arzobispo Carlos Chaput (aka Archbishop Charles Chaput) the caravan of ninos and ninas made the arduous trek across 17th street to the Philadelphia 201 Hotel for the Gala. All of the more than 550 children received an appropriate straw sombrero and the fun began, featuring the multi-talented Padre Cristobal Walsh (aka Father Christopher Walsh) as emcee.

Assisting with the entertainment were students from St. Raymond of Penafort School and St. Athanasius School with various skits and lively musical interludes which literally had the young guests spontaneously dancing in the aisles.

Also contributing to the festivities were students from St. Charles Borromeo Seminary as well as students from Catholic high schools.

Attending as guests of honor were young children from various schools, residential programs, out-of-school-time programs and refugee programs from throughout the archdiocese served by Catholic Social Services.

On hand too were the archdiocesan officials who work in the ministry year-round and adult donors who make the work of Catholic Social Services possible.

Although the theme this year was the Latino community, “We have children here from diverse backgrounds,” explained Jackie Delaney, who has been chair of the event for almost a decade. “I don’t count how long anymore,” she said. “It is a lot of fun, and it couldn’t get any better.”

Delaney cited the contribution of the many individuals and groups who work to make the annual event, which is also a fundraiser for CSS, a success.

This year she especially cited Beneficial Bank, which has a long history of working with the church, as the main sponsor of the Gala.

All of the archdiocesan officials present agreed it was a fabulous event, but the most important critics were the young guests themselves.

Julia, one of the Little Bears from Casa Del Carmen, really liked the doll she received from Santa, and of the animals at the outdoor creche. She was awed by “the big one,” presumably the camel.

Elijah, with a group from Holy Innocents Parish, really enjoyed the presents and singing, and liked that he could touch the live animals especially “the donkeys.”

Aiden from St. Barnabas said, “I liked my presents and I liked the singing, and the animals were cool especially the llama.”

As much as the young guests enjoyed the party, which could aptly be called a fiesta, the young volunteers were equally thrilled.

“This is my first-time at this,” said Katie Duffy, a senior at Lansdale Catholic High School. “It was really great just hanging out with the kids. They were having a good time; they enjoyed the hats and the music.”

Eric Tamney, a first theology seminarian at St. Charles, sported an impressive black sombrero, which could have passed for a black galero worn by a minor Vatican functionary. He is an old hand at the annual children’s party from his days as a volunteer while attending Bishop Shanahan High School.

“I sang with some of the other seminarians,” he said. “I was a back-up (singer) to a back–up. Today was just a wonderful, beautiful day.”

As for Father Walsh, the emcee for the day, in his opinion the gala was “a beautiful witness to the church at its best, caring for children. It was an opportunity for Catholic Social Services, the high school kids and the other volunteers to come together, being mindful of those who are facing a really tough time.”

NEXT: Pennsylvania priest sent to prison after guilty plea in abuse case