Meet the millennial Catholics of Phila. sticking with their faith 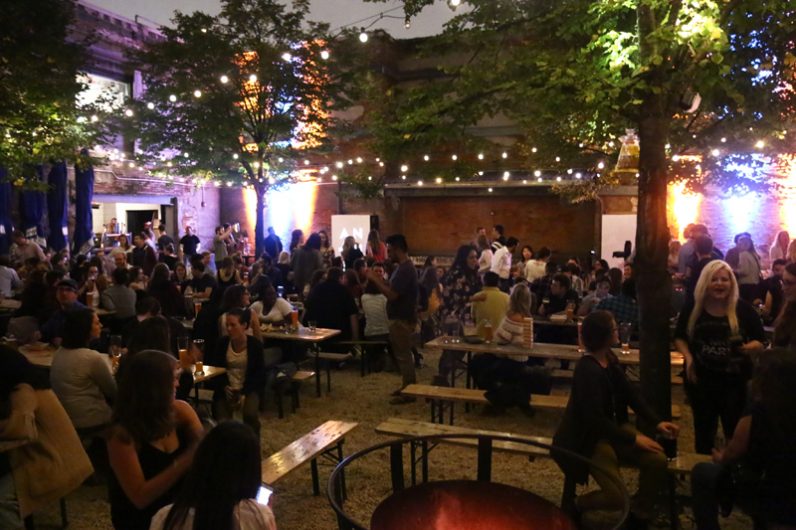 Young adult Catholics share a fun night with one another at the Oktoberfest party last fall in Philadelphia, sponsored by Anthem, the youth and young adult ministry of the Archdiocese of Philadelphia. (Photo by Sarah Webb)

PHILADELPHIA (RNS) — Catholics in Philadelphia and places like it have been through hell in recent decades.

The Catholic Church’s sexual abuse scandal, detailed in Philadelphia in grand jury reports in 2005 and again in 2011, rocked local Catholics — laity and clergy alike — to the core and left them wondering just how much they should continue to trust their beloved church.

About one in five registered Catholics (19 percent) in the Philadelphia Archdiocese attended Mass weekly in 2017, down from 22 percent in 2013.

Still, well over 200,000 Catholics in the archdiocese do go to Mass each week.

Recently, a group of about 30 of them were gathered for a parish event at St. John the Baptist Church in Manayunk — a Philadelphia neighborhood popular with the post-college set. Some talked about why they remained Catholic when others have left the church.

Mostly millennials, they were there for the monthly “Theology on Tap” event. Part meet-and-greet, part Sunday dinner, part religion class, the format is a staple of Catholic young adult ministry, designed to explore the church in a relaxed way.

Megan Kacenski, a recent graduate of the University of Massachusetts, Amherst, came to Philadelphia three months ago for her new job as a tree worker.

“Being 22, you question a lot of things,” she said. To leave the church because of scandal would be a result of “putting faith in people, not in God. I try not to do that.”

Like many of the attendees, she said she doesn’t come from a particularly religious family. But she herself had been very involved in interfaith activities in college and came to the Manayunk event looking for a sense of Catholic community in her new town, and a way to add some religious depth beyond Sunday Mass. Her relationship with God brings her to Mass.

“I do love what being Catholic has done to my life,” she said.

Jillian Buhl, who runs the Theology on Tap program for St. John the Baptist Parish, explained why she believes the Catholic Church survives in Philadelphia.

“I don’t mean to sound insensitive, but we’ve been through this,” she said of the nonstop scandal-related headlines. What matters to the Catholics she works with now is the future: “Starting today, this is the church we want to be part of.”

The national outrages continue to crop up in various forms, she said. But the Catholics she knows have confidence in the child-protection protocols the church instituted more than a decade ago. Now, what she hears from local Catholics “over and over again is compassion for the good priests” carrying on amid suspicion and cynicism.

He sought to illuminate for the group Catholic beliefs that might seem difficult to grasp, even to the initiated. One example, he said, was the church’s teaching on the resurrection of the body.

“What does that even mean?” he asked. With plenty of material on the topic of beliefs, the conversation was devoid of scandal talk.

Afterward, nearly all the participants said the clear distinction between faith itself and the human failings of the church allowed them to continue as Catholics.

Michael Trott, a project accountant from Philadelphia, kept one eye on the Eagles game on his phone while chatting about his faith.

Raised Catholic but not practicing, he returned to the church five years ago, driven back to God, he said, by “life events.” He said that by remaining Catholic even in the face of scandal in the church, he helps assure that the faith will be there for others like himself, who have turned to it in time of personal need.

“If I stay a faithful Catholic it helps everybody else,” he said.

He sees Mass not only as a religious obligation, but as a personal offering to God in what can become, he said, a “me-me-me” life.

“I’ve definitely thought a lot about this,” he said of his church’s troubles. He, too, feels some responsibility for the future. “My understanding is that in times of deep crisis it is the laity that is going to effect change.”

Meanwhile, he said, he remains steadfast in his conviction that God is in control.

“I still believe the majority of priests are good and holy men,” he added.

Nearby, Dennis Link, a 49-year-old city worker, was one of a handful of nonmillennials in attendance. He came to enrich his own knowledge of the faith and to offer his presence to others. Back at home, he has two children in Catholic school and he believes they deserve answers from him.

Though their institution may have failed the faithful, the failures “don’t make me doubt Christ’s message,” he said. “The faith is what is pure.”

Still, part of his responsibility, as he sees it, is to ask questions — a lot of them — of his pastor and to offer his own support in return.

At a nearby table, third-year medical student Elizabeth Ciccocioppo, said that faith is a central part of her life. Part of a large Catholic family, she is active in church ministries and often goes to daily Mass.

“I go to Mass to worship God and to receive him in the Eucharist,” she said. “It’s good to be around people as well, but I go to Mass (primarily) to receive the sacrament.”

In life and work, the faith that God is with her physically is crucial, said Ciccocioppo.

“The strength that I don’t have myself, I get there, and I don’t get it anywhere else.” 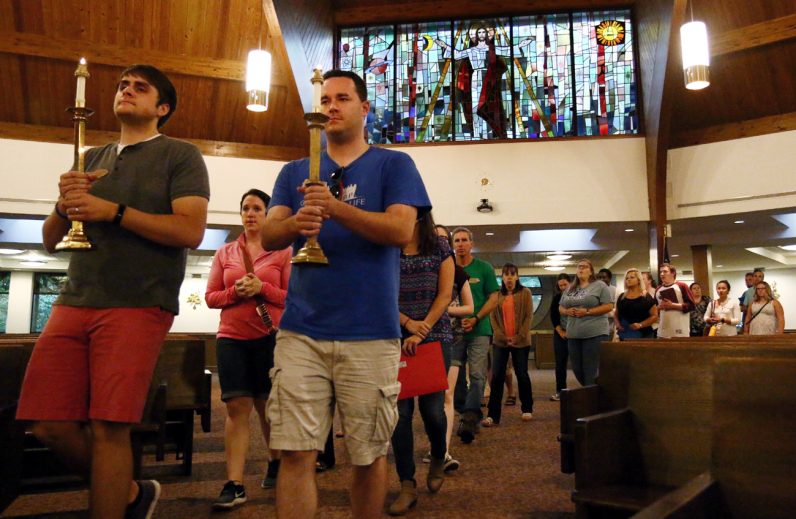 Bill Rose (left) and Rich Konowal serve as acolytes for the eucharistic procession Aug. 25 at St. Eleanor Parish in Collegeville, part of the day-long retreat for young adult Catholics in Montgomery County. (Photo by Dan McCarty)

PREVIOUS: Virtue and veggies can help keep off the holiday pounds

NEXT: When families open homes to the disabled, everyone wins