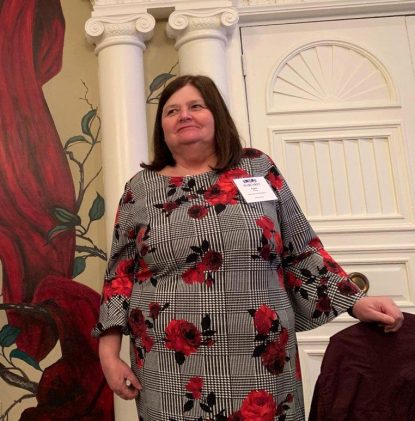 Margaret Egan, principal of SS. Peter and Paul School in West Chester, receives the Terrel H. Bell Award for outstanding school leadership in November from the U.S. Department of Education in Washington, DC.

It was unprecedented when nine Catholic schools within the Archdiocese of Philadelphia were named Blue Ribbon Schools of Excellence by the U.S. Department of Education this year, considering the many, many thousands of public and private schools nationwide.

It was icing on the cake when Margaret Egan, the principal of one of these schools, SS. Peter and Paul School in West Chester, was among 11 recipients nationally to receive the coveted Terrel H. Bell Award given to principals who have transformed their school. What makes the award really special is that it is based on the nomination given by their own staff. Peg, as she is known by her faculty, is the real deal.

Actually, it would be more accurate to say she formed her school, not transformed it, because she was there from its beginning.

Her introduction to the teaching profession in Catholic education 50 years ago was unique and couldn’t happen today.

Born Margaret Briddes, she is originally from Collingdale where in St. Joseph School she was taught by the Immaculate Heart Sisters who were truly educators, she recalls. Even in grade school she thought about a career as a teacher, and while a student at Archbishop Prendergast High School she joined a future teachers’ club.

As the eldest girl in a family of five children there wasn’t much money for college, which would be a problem. She could enter the convent of a teaching order of course, but that for her was a nonstarter. “I liked boys too much,” she said.

But the archdiocesan Catholic school system was still expanding and desperately in need of teachers. A notice went out that the archdiocese was initiating a Cadet Teachers Program. Qualified girls coming directly out of high school were hired to teach in elementary schools while working for their degree and certification through night school and summer school.

She jumped at the chance and after graduating from Prendie in a class of 744, she was hired.

At St. Gabriel School in Norwood, where she was assigned, the school was still growing and the principal asked her what grade she would like to teach. For no particular reason Egan said, “fourth grade,” and that’s what she got.

There she was in 1968, fresh out of high school, age 17, teaching 55 fourth graders and loving it. By 1973 she had her degree from Gwynedd-Mercy College but stayed on at St. Gabriel and fourth grade for 32 years.

She really experienced all grades through summer school, and filling in as acting principal as needed. Certainly, she could have easily transferred to public schools and made a lot more money.

“I felt the archdiocese did me a favor which allowed me go to school at a reasonable price and kind of learn on the job,” Egan said. “It was almost like an internship and you know what? I loved it.”

Meanwhile, in 1975 she married her husband, James, who would have a career with the U.S. Postal Service. Originally they were members of Notre Dame de Lourdes Parish, Swarthmore, and now they are in St. Kevin, Springfield.

A sports fan, for many years she worked on a part-time basis for the Phillies, first as an usherette then as a supervisor. It was fun, but could be tough getting up in the morning when there was a late, late extra-inning game, but she loved the sport and the excitement.

She and James raised three children — Michelle, Matthew and Stephanie — and are now grandparents. Her greatest sadness was the death of Stephanie two years ago from a chronic illness.

It was in 2001 that SS. Peter and Paul Parish started its school, and she joined the faculty as technology and gym teacher, but also to assist the principal Nancy Heim, who died very shortly after. Egan has been principal since 2002.

Most of Peg Egan’s time isn’t spent in an office, it’s welcoming the kids in the morning, visiting the classrooms or cafeteria, or wherever the action is.

“I enjoy the interaction with them,” she said. “They are young and it is great to be around the young. They are eager to learn and love to learn. Your hope is they want to make good and be good.

“We started with 181 kids, now we have 371,” she said. “Our school starts with 3-year-olds and goes to eighth grade and graduation. They know what our culture is, faith and service; hearts of love made of service.”

The hardest part is when bad things happen — death, struggle, divorce. “It’s sad when kids are hurting, they don’t get to pick that,” Egan said.

But on the whole. It’s been a good experience.

“The joys outweigh the sorrows, and the reward for me is every day,” Egan said, “especially when you can make a difference in their lives. Some people never get that.”

NEXT: Not seeking religious life, Sister Alice heard the call in the classroom