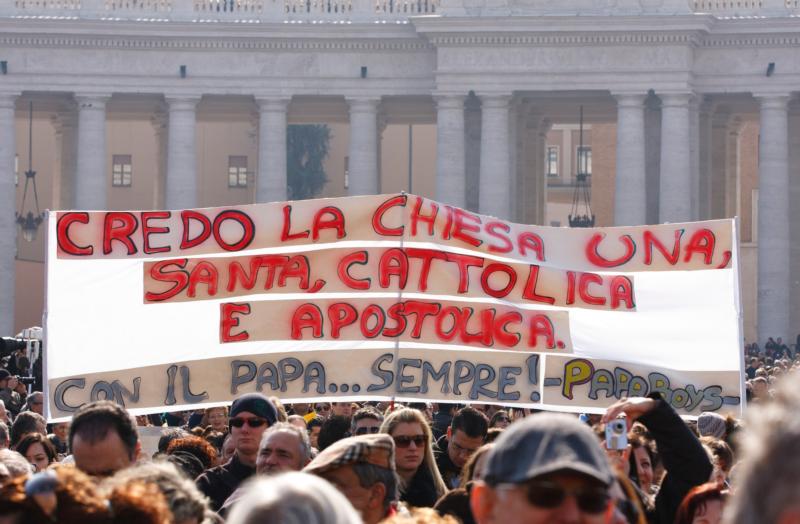 A sign in St. Peter’s Square refers to part of the Nicene Creed as Pope Benedict XVI leads the Angelus from the window of his apartment overlooking St. Peter’s Square at the Vatican. The sign reads: “I believe in the one, holy, catholic and apostolic Church. With the pope… always!” (CNS photo/Paul Haring)

Do I know what I truly believe? I hope so. For what people believe shapes their thinking and decisions, especially in key, consequential moments.

Were my beliefs different, I might “invest” myself differently than I do in the people and world around me. So I need to know what beliefs I aim to live by.

The question’s answer is essential to achieving the self-understanding that makes life go better.

Being human I benefit from reminders of my core beliefs and frequent challenges to refocus on them, alone or with others. The ancient Nicene Creed prayed together during celebrations of the Eucharist fulfills just such roles.

With its repeated “I believe” affirmations, it challenges believers to zero in on faith’s foundations.

The creed is a statement of beliefs bonding Christians to Christ and each other. I think it diminishes the creed, though, to consider it only a collection of statements, similar to those in a contract, for example. Its presence in eucharistic celebrations spotlights it as a call to prayer and growth in faith.

Pope Benedict XVI said that “Christians in the early centuries were required to learn the creed from memory. It served them as a daily prayer not to forget the commitment they had undertaken in baptism.”

The risk in underestimating the creed’s strengths is that its warm faith and relationship to 21st-century lives becomes hidden from view.

The creed encompasses a happy message, according to Bishop Daniel E. Flores of Brownsville, Texas. Its “happiest words” for him are, “He came down from heaven.”

The creed says of the Lord, “For our salvation he came down from heaven.” The words mean, Bishop Flores suggested in 2010, that “God did not send an angel from the front office to save us; he came himself.”

This reveals that God “wanted to meet us in person,” Bishop Flores later commented. He said in 2018 that God is near and “unites himself to our journey.”

So in pointing toward God, the creed also brings a vision of Christian life to the fore. If people “looked for” Jesus in this world, “it was because he first made himself accessible,” Bishop Flores observed. “We could say that he accompanied his disciples so that later they could accompany those” they encountered along life’s paths.

Prayed after the homily at Mass, the creed underscores the oneness of the church’s people. Yet, it does not function as a homogenizer, rendering irrelevant the diverse talents, hopes, ethnicities and situations among the church’s people, who remain sources of enrichment to each other.

Neither does the creed shut down regard for followers of other creeds. As the American Cardinal Kevin J. Farrell said, when “we see and revere in the other person of a different color or creed or ethnic background the image and likeness of God, then we together can move forward as God’s pilgrims on this good earth.”

So much of the creed is material for meditation. Take its concluding affirmation: “I look forward to the resurrection of the dead and the life of the world to come.” But does fear of death tend to overshadow positive thoughts of “the world to come”?

Passionist Father Donald Senior, a U.S. biblical scholar, once asked whether there will be “any meaningful continuity between,” on the one hand, “the joy I have known in the love of another person” and the joy experienced in this world and, on the other hand, “the experience of life projected beyond this life.”

He responded, “Belief in the resurrection of the dead and belief in bodily resurrection affirm that, indeed, love is stronger than death.” Thus, “the consuming experience of our destiny is communion with a God of love and with all those whose love we have known.”

PREVIOUS: In Mass, Word of God comes through clergy and people

NEXT: The eucharistic prayer: Culmination of mystery made manifest