Beyond a handshake: The profound nature of the sign of peace 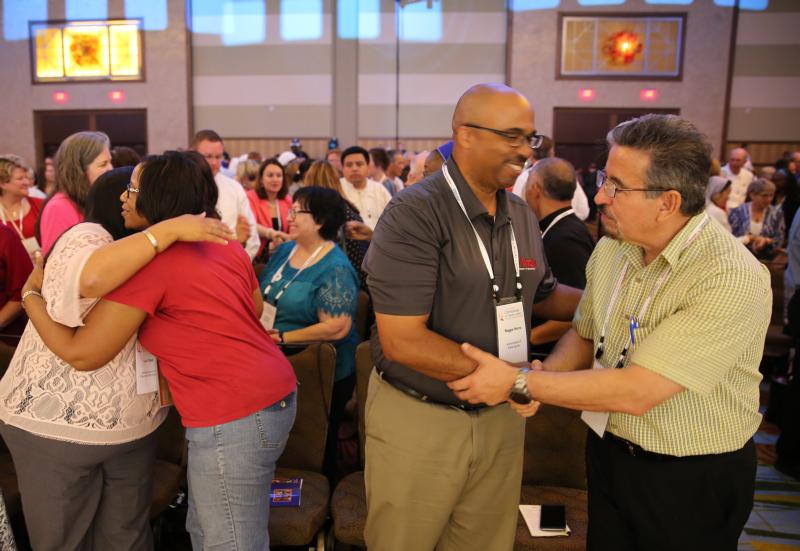 Attendees exchange the sign of peace during the opening Mass of the “Convocation of Catholic Leaders: The Joy of the Gospel in America” in Orlando, Fla. The sign of peace has its liturgical and spiritual roots in Jesus’ teaching on forgiveness prior to offering gifts on the altar (Mt 5:23-24). (CNS photo/Bob Roller)

The child’s voice cut through the church and stirred up ripples of laughter at an otherwise solemn moment at Mass. Parents, red-faced and cringing, tried to gently silence their beloved but overexpressive child. But the child was firm in her dislike and the mood was set.

Even as Mass moved on, a subtle wave of humor directed at the hapless family acknowledged the “faux peas.” And the story, told to me by a friend, lives on today as one of those “children say the funniest things” tales.

Of course, peas were not being served at that Mass (or any other). The child’s outburst was a mis-reaction to the celebrant’s words, “Let us offer each other the sign of peace.”

But as outlandish as her gaffe, there is a grain of truth to the child’s underlying error of understanding: Although it is a regular part of each Mass, many of us may not understand the deep meaning of the sign of peace and so might approach it with partly puzzled gestures ranging from mere nods to full-on bear hugs of otherwise total strangers.

A brief revisit of the history and reasons for the sign of peace can help us recollect how this part of the liturgy is not only steeped in contemporary meaning but profoundly reflective of the whole purpose of Jesus’ ministry and message.

The sign of peace has its liturgical and spiritual roots in Jesus’ teaching on forgiveness prior to offering gifts on the altar (Mt 5:23-24). That is, if someone had a grievance against his brother, he should first “be reconciled to your brother, and then come and offer your gift.”

As Christian worship evolved, the gesture of a “kiss of peace” was a way to unite the community gathered in love and reconciliation. Without being at peace, the community and its members could not fully reflect or live the peace and love of Christ in Eucharist.

The “kiss of peace” took on various forms as liturgy developed. Sometimes it involved clergy and congregation, and sometimes only clergy. Today, we know this part of the Mass, placed just after the Lord’s Prayer and a brief invitation by the priest (“Let us offer each other the sign of peace.”), as the sign of peace.

Although the invitation is the same for each Mass, the way that peace is expressed can vary from parish to parish or diocese to diocese. Conferences of bishops or local dioceses are able to set parameters for their faith communities. Cultural and congregational considerations can play a role in what gestures best express the fullness of this gift-giving of peace.

However, according to the 2014 circular letter on “The Ritual Expression of the Gift of Peace at Mass,” released by the Vatican’s Congregation for Divine Worship and the Sacraments, actions at the sign of peace should maintain the “sacred sense of the eucharistic celebration,” and so avoid a “song for peace,” “movement of the faithful from their places to exchange the sign of peace among themselves,” “the departure of the priest from the altar in order to give the sign of peace to some of the faithful,” and should not be used as a time to express “congratulations, best wishes or condolences among those present.”

There is some latitude in the case of a funeral, where the priest may offer peace to a “small number of the faithful near the sanctuary” (General Instruction of the Roman Missal, No. 154).

The U.S. Conference of Catholic Bishops has not established an “official” expression of peace.

PREVIOUS: Praying for a newly engaged couple, and a retired pope

NEXT: A circle of praise and petition