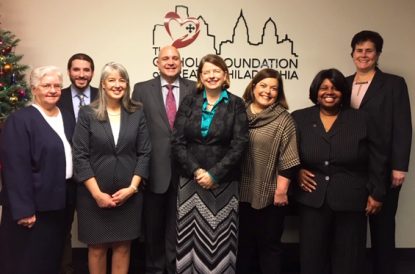 Some of the recipients of a grants from the Catholic Foundation of Greater Philadelphia gather at the foundation’s office to show their gratitude for a total of $75,215 raised to enhance security at nine local Catholic schools.

Given the number of high-profile acts of violence committed against children in schools in recent years, school safety is of highest priority. Schools, no matter how safe their community is, have been proactive in taking measures to prevent anything happening on their campus.

At times they wish they could do more, but funding, especially in the nonpublic school sector, is not always there.

Recently the Catholic Foundation of Greater Philadelphia stepped into the breech by awarding a total of $75,215 in grants to nine Catholic schools within the archdiocese to assist them in making their facilities and schools as safe as possible.

“In today’s climate the safety of our children must be of the highest priority and that’s something both the Archdiocese of Philadelphia and the Catholic Foundation feel very strongly about,” said Angelo Valletta, the president and CEO of the foundation. “The hope was that we’d have the opportunity to support a handful of schools in need of achieving a base level of security and response for their school needs. Luckily through the generosity of our donors we have been able to do just that.”

Just what those needs are varied from school to school.

At 880-student Roman Catholic High School in downtown Philadelphia, a grant of $10,000 was used to improve the locks and passkey systems at three buildings.

“It really was a help to us to upgrade our system,” said Father Joseph Bongard, Roman’s president. “We have cameras in all of our buildings, and this helped us upgrade with the latest technology.”

The school has not experienced any incident but rather is being proactive and prepared, he explained. Roman Catholic already has an elaborate system of cameras to monitor its entire center city Philadelphia campus, including outdoors.

Also, recently Pearl Street, a small street that bisects the campus, was closed off with gates with permission from the city. Something that will make the area even safer, Father Bongard notes, the Philadelphia Police Department is in the process of relocating its headquarters to the former Inquirer building just on the other side of Broad Street.

Our Mother of Providence Regional School in Wallingford, which has 249 students, also received a $10,000 grant for security cameras and an access control system.

“We are upgrading the entrance to the school with new doors,” said Therese Waters, the school’s principal. “We already had a camera and a buzzer; now we have two doors and visitors have to be buzzed in through both of them. We haven’t had any incidents of violence or theft, fortunately,” she said. “We did have money to cover some of the needed work; this money covered the rest of it.”

“The grant was great, it was an opportunity to replace two sets of doors,” said Laura Robinson, the school’s business manager. “You read about these things happening all over, and you want the kids to be safe as possible.”

In addition to child safety another concern for schools is theft and vandalism. The blackboards and hand-me-down text books of the past have largely been replaced by expensive computers and other sophisticated equipment.

A couple of years ago Holy Family did have a break-in and a number of iPads were stolen. Thanks to the security cameras in place, most of them were recovered by the police, Robinson said.

Nativity of Our Lord School in Warminster, which has 475 students, received $10,000 to upgrade security locks and cameras around the school.

“We are putting cameras inside and a scanning system for ID cards. We are on a main street and anybody can watch our coming and going. We have cameras all around and I have a large TV in my office to monitor comings and goings. Everything costs money.”

Other schools receiving grants include:

PREVIOUS: It’s an extraordinary year to be a missionary, without leaving home

NEXT: Catholic, Jewish, Muslim students learn together in Catholic school