In D.C., Philadelphians choose life — and march for it 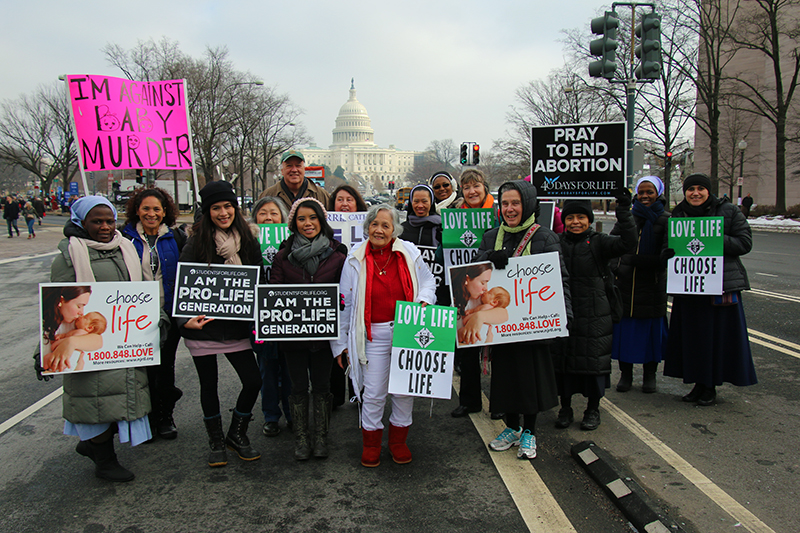 Participants in the 46th annual March for Life gather several blocks in front of the U.S. Capitol Jan. 18. Some 3,000 Philadelphia-area attendees from an array of archdiocesan schools and parishes took part in the event. (Photo by Marc Cordero)

“I’m excited for my young women to be a part of something great,” she said.

A member of St. Maria Goretti Parish in Hatfield, McLaughlin traveled with two of her daughters and one of their friends to the 46th annual March for Life on Jan. 18 in Washington, D.C. Some 45 fellow parishioners joined McLaughlin and more than 3,000 Philadelphia-area pilgrims at the demonstration, which peacefully protests Roe v. Wade and Doe V. Bolton, the 1973 U.S. Supreme Court decisions that legalized abortion.

For McLaughlin and thousands of other Catholics, the march was preceded by Mass at the Basilica of the National Shrine of the Immaculate Conception in the nation’s capital. Kansas City Archbishop Joseph F. Naumann, chairman of the U.S. bishops’ Committee on Pro-Life Activities, served as principal celebrant and homilist at a Jan. 17 liturgy, which was immediately followed by an overnight prayer vigil at which seminarians from across the nation led holy hours.

On the morning of the march, Philadelphia Auxiliary Bishop Timothy Senior was the homilist at a special Mass in the shrine’s basilica for the Philadelphia Archdiocese’s pilgrims, whose ranks included seminarians, students from a number of archdiocesan schools, and parishioners.

“The truth never gets old,” said Bishop Senior, rector of St. Charles Borromeo Seminary in Wynnewood. “Every human life is loved beyond imagining by God, and we are radically equal before God as members of the human family.”

Reflecting on the day’s Gospel, in which Christ healed a paralytic brought to him by four men (Mark 2:1-12), Bishop Senior stressed that a commitment to life requires “going to extraordinary lengths” through “faith, action and prayer.” He urged those present to “bring those most vulnerable to the feet of Jesus,” including the unborn, the terminally ill, prisoners on death row, refugees and victims of human trafficking.

“We also bring the abortionists, the technicians, those who oppose and mock us,” he said.

(Listen to Philadelphia-area participants share their reasons for attending the 2019 March for Life.)

Following the Mass, pilgrims made their way to the grounds of the Washington Monument for the noontime March for Life rally, which featured a surprise appearance by Vice President Mike Pence and second lady Karen Pence.

The vice president presented a videotaped message by President Donald Trump, who promised to “always defend the first right in our Declaration of Independence: the right to life.”

During the march itself, the Philadelphia contingent was led by Bishop Senior and Auxiliary Bishop John McIntyre, processing behind a banner carried by St. Charles Borromeo seminarians.

Now in its fifth decade, the march has come to draw an increasing number of young people.

“My first march was in the early 1990s, and back then, I saw mostly older people,” said Sister Margaret, a member of the Sisters of Life in the Archdiocese of New York. “But over the past 25 years, it’s totally changed into the young people — and families, schools, and organizations, of course — but it’s the Millennials that are now marching.” 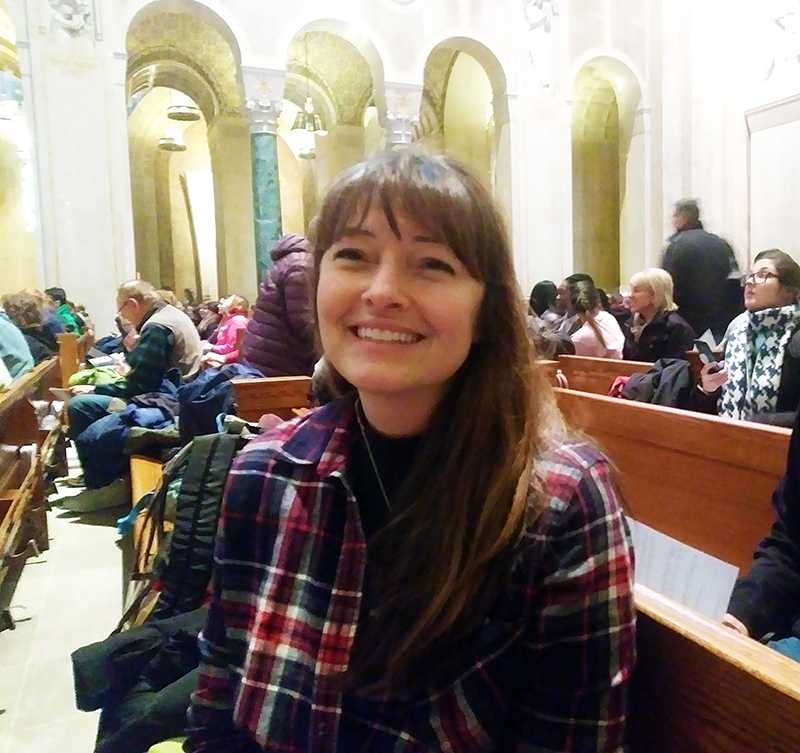 Robin McLaughlin of St. Maria Goretti Parish in Hatfield awaits the start of Mass at the Basilica of the National Shrine of the Immaculate Conception in Washington, D.C., Jan. 18. McLaughlin and two of her teenage daughters attended the Mass just before participating in the 46th annual March for Life, which drew some 3,000 Philadelphia-area faithful. (Photo by Gina Christian)

Robin McLaughlin agreed. “I think it’s time for the young to join with those who are already making a stand, and let those young people’s voices be heard,” she said.

Education and awareness are key to this effort, said her friend and classmate Mairin.

“It just upsets me that our generation is so ignorant and doesn’t know what abortion really does,” she said. “It’s taking away life that God has given us. And I just want to end that and be part of bringing the truth out.”

“As a woman and as a feminist who is pro-life, I don’t think those two messages conflict,” said Travaline, who has attended the march since childhood with her family and fellow parishioners from Mary, Mother of the Redeemer in North Wales. “I think that being pro-life is being pro-woman.”

Oblate Father James MacNew, the chaplain of Holy Family University, said the best witness at the March for Life is offered through “lived spirituality, not political activism.”

While the nation’s laws permitting abortion need to be changed to protect the rights of the unborn, he said, the approach should be one of compassion and accompaniment, rather than strident conflict.

“We come in the spirit of the Holy Family, which we see as one of embrace,” said Father MacNew, who attended the march with a group of some 50 Holy Family students. “We want to be approached by that young girl who is carrying a baby right now; we want to be her first phone call.”

Father MacNew added that several of his students had been trained to assist the Sisters of Life as volunteers in their crisis pregnancy outreach. 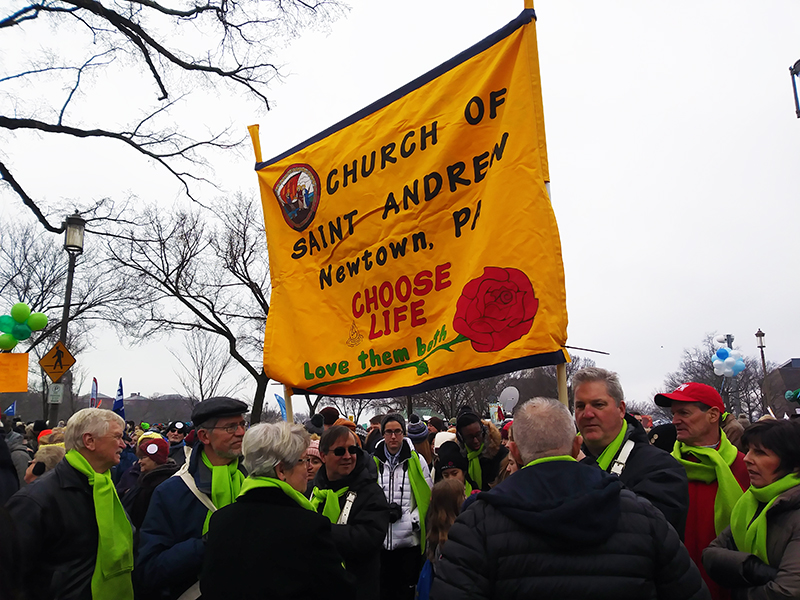 Members of St. Andrew Parish in Newtown assemble prior to the 46th annual March for Life in Washington, D.C., Jan. 18. The parishioners were among some 3,000 participants from the Philadelphia archdiocesan area. (Gina Christian)

One such volunteer, sophomore Lena Staropoli, said she prepared for the march through prayer.

“I think it’s very important that, in an environment that can be perceived as hostile, you just show love,” said Starapoli, who is considering a career with Catholic Relief Services. “By showing them love and grace, they’ll eventually be able to come to the decision that they’re doing the wrong thing by choosing abortion.”

“I think a woman’s greatest underlying fear in abortion is a fear of abandonment,” said Pine, who traveled with approximately 70 fellow parishioners to the march. “And I think if we understand that, and embrace that, and then be supportive to your wives, sisters, mothers, and daughters, then you’ll win hearts, and it won’t be a judicial or a legislative issue; it’ll just come from people deciding that they choose life.”

Eleven-year-old Rachel McLaughlin echoed this view on one of the most divisive issues of modern times.

“I’m really happy to be here — happy to be a part of the march, and to just help be part of a growing movement for life.”

PREVIOUS: Couple shows the path of life on journey of healing from abortion