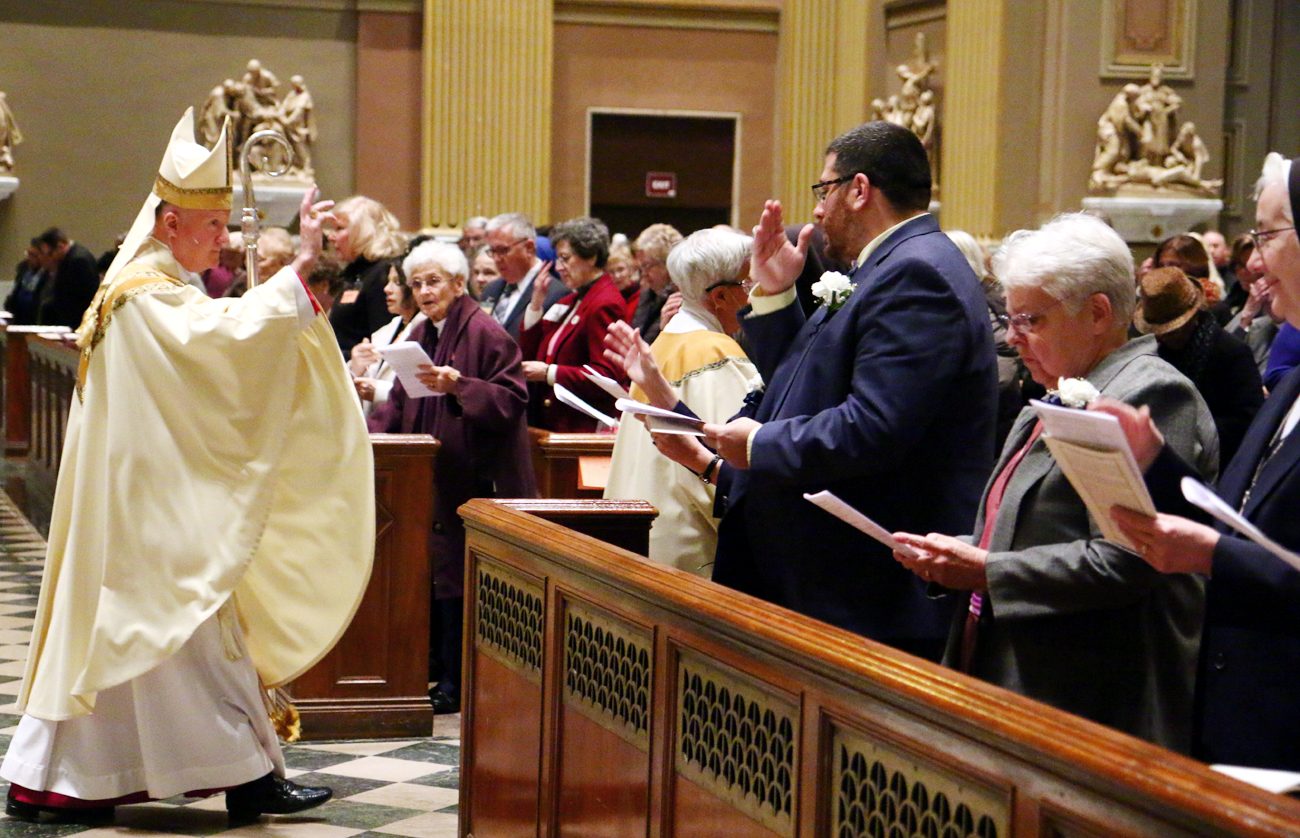 On Saturday, Jan. 12, the annual Mass and award ceremony for parish religious education programs was celebrated at the Cathedral Basilica of SS. Peter and Paul with Bishop Michael Fitzgerald as presider.

At the ceremony 215 lay catechists were honored for their years of service in their parishes ranging from five years to 40 years, as well as seven religious sisters and lay directors of religious education.

In addition, one pastor, Father Christopher Walsh of St. Raymond of Penafort Parish in Philadelphia, received the Pope Paul VI Award. According to the archdiocesan Office for Catechetical Formation which sponsored the ceremony, it is the highest catechetical award for “an outstanding leader who has made significant contributions to catechesis on archdiocesan national or international level.”

“This is our 10th anniversary giving the awards at the cathedral,” said Ann Menna, the deputy secretary for catechetical formation for the archdiocese, who assisted at the award ceremony. “We always get a good crowd for this.”

In his homily to a congregation composed mostly of catechists and their families, Bishop Fitzgerald, who oversees Catholic education in the archdiocese, congratulated the awardees for their years of service and called catechesis “one of the most important ministries of the church.”

The Gospel for the day had special significance in that it focused on St. John the Baptist.

“He knew the Lord, he loved the Lord and he brought others to the Lord,” Bishop Fitzgerald said, holding John up as an example for the catechists.

Clearly the catechists are doing just that. For example, Bill Fucich of Our Lady of Good Counsel Parish in Southampton and a recipient of the Martin de Porres Award for 20 years’ service, recalled how he started.

As a catechist, “I was asked to help a woman who was having a little trouble with the boys, and I was a little muscle, if you will,” he said. “She let me co-teach and when she left for family reasons, I took over the class. It’s funny how God puts you in a place. He transformed me because to teach you have to learn. It utterly changed my relationship to God.”

Carol Kelly of St. Dorothy Parish in Drexel Hill received the St. John Neumann Award for five years’ service as a catechist. She credits Sister Alice Gray, R.S.M., (see our Profile story) for getting her involved.

“My children went through her program and I just wanted to give back now that I have the time,” she said.

In addition to the awardees the cathedral was filled with supporters and well-wishers. Sister Mary Ellen Kennedy, I.H.M., was there for Sisters Kathleen Fitzpatrick and Sister Helene Thomas Connolly, who received awards as DREs (director of religious education).

“I’m thrilled to be here to support our sisters who have given so much to ministry in the catechetical profession,” she said. “The sisters have a passion for spreading the Gospel message. It is important that we support all of our people in the church.”

Sister of St. Joseph Catherine Gerald Kelly, the director of mission for her congregation, was there to see Sister Margaret Jude Sullivan receive an award. “Our sisters had a great love for the children in the elementary schools and this is a way for them to consider that ministry,” she said, noting many of the former school teachers are now in parish religious education ministry.

But of course, most of the awardees were lay men and women. Another example was 20-year man Joe Dagney of Our Lady of Consolation Parish, Parkesburg. He has taught high school, middle school and confirmation classes. He believes his work as a catechist has helped him at least as much as it helped the children.

“This has changed my life. It has made me a better father, a better husband and a better worker. It has been a blessing,” he said.

Religious education classes certainly have been a blessing for the archdiocese also. Once something of a stepchild in parish ministry they have become extremely important if underappreciated.

According to archdiocesan figures there are now more Catholic children in parish religious education classes than there are in parish and regional Catholic elementary schools. The catechists and DREs deserve every award they get. God bless them.

Interestingly, the awardees at the Mass and ceremony represented just a little under 30 percent of the parishes in the archdiocese. If all the parishes submitted the names of their eligible teachers, the annual Mass would need a lot bigger venue than the cathedral.

Directors and Coordinators of Religious Education

PREVIOUS: Priests restricted from ministry due to sex abuse claims

NEXT: While feeding the hungry, Catholic market respects their choices