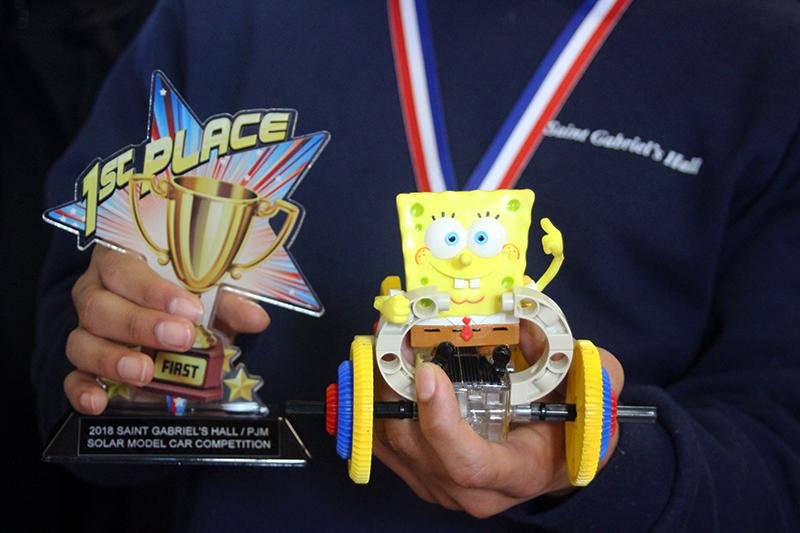 A student displays a model solar car that claimed first prize in a Dec. 7 competition at St. Gabriel’s Hall, an archdiocesan school that provides residential and educational support to at-risk youth. (Photo by Gina Christian)

The automotive industry has been slow to adopt solar technology, but teens at one Montgomery County school are working to accelerate that process while acquiring valuable life skills.

Now in its sixth year, the project has become a beloved tradition at the Middle States accredited school, which is operated by archdiocesan Catholic Social Services (CSS). The hall is a residential treatment program at which more than 140 adjudicated youth ages 11 to 18 receive comprehensive behavioral and educational support.

The solar car project was launched by PJM Interconnection, an Audubon-based firm that manages the electrical power grid for Pennsylvania and several other states. Looking to expand its community involvement, the firm approached St. Gabriel’s to offer its support.

“We wanted to have the kind of mentoring program that was hands-on and tactical, not just the ‘Hey, what do you want to do with your life?’ kind,” said Esrick McCartha Sr., a senior business solutions analyst at PJM.

The solar car concept was an ideal way for McCartha and his colleagues to reinforce the students’ coursework in STEM (science, technology, engineering and math) subjects. From September to December, about a dozen St. Gabriel’s teens work with PJM volunteers to construct and customize solar car models. The cars are judged on speed, ability to scale an incline and style. In addition, the teams must deliver a five-minute presentation on their efforts.

(Watch a video of the St. Gabriel’s solar car competition.)

And it’s during the presentation that the true value of the solar car project is illuminated, said McCartha, since the ultimate goal is to cultivate the teens’ project management skills.

“We use what we call an ‘EPIC’ process, which stands for explore, plan, implement and close,” he said.

Throughout the semester, students learn to manage the time and materials allotted to build the cars, while documenting their progress and setbacks. Collaboration is central to the project.

“Teamwork makes the dream work,” said Jordan B. after his presentation. “I wouldn’t have been able to do it by myself, but with all of our minds together, it was fantastic.” 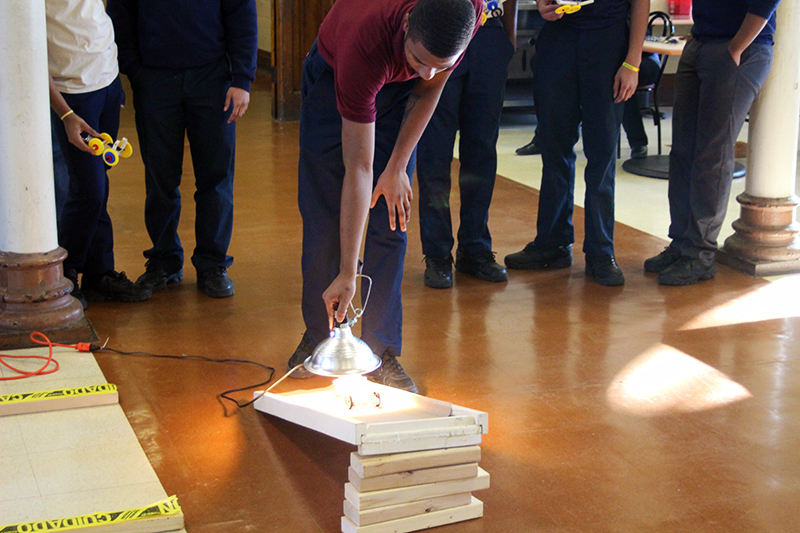 A student uses a handheld lamp to direct a model solar car up an incline at a Dec. 7 competition at St. Gabriel’s Hall, an archdiocesan center that provides residential and educational support to at-risk youth. (Gina Christian)

Difficulties proved to be opportunities for growth, said Joshua J. “We refocused our efforts and learned to communicate.”

Tyshan F. of the “Money Team” agreed. “I really learned how to work with different types of people.”

On Dec. 7, the teams gathered with fellow classmates and St. Gabriel’s staff to put their cars to the test, coaxing the models along a course with level and inclined stretches. The race drew cheers and laughter from participants and spectators, but for the students, the outcome was already assured.

With the solar car project in the rearview mirror, several participants are now considering careers in the sciences.

“My goal is to be an aerospace engineer,” said Jordan. “And when I get my house, we will have solar panels to save on the bills and help the environment.”