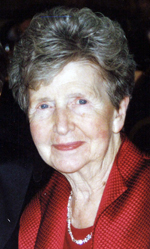 Elizabeth Ann (Bette) Parsons passed away peacefully with loving family members by her side on Dec. 15. She was 93.

Bette shared 66 years of marriage with her loving husband Don prior to his passing in 2013.

Her life was devoted to her faith in our Lord, to raising her family of eight children, and supporting Don’s dreams which included his vision to create Communications Test Design, Inc. (CTDI) whose employees then became part of her extended family.

The daughter of Martin and Mary Elizabeth McDonough, Bette was born in Philadelphia and grew up in West Philadelphia along with her siblings Kathryn (Kass), Jack and Leo.

Bette attended Most Blessed Sacrament School and graduated from West Catholic Girls High School. Following high school, Bette went to work at PSFS in downtown Philadelphia until she met the love of her life, Don, who had recently returned from serving in the U.S. Navy.

They began raising their soon-to-be large family in Glenolden prior to moving to West Chester in 1960.  Bette and Don enjoyed life after raising their eight children. They loved to travel and had fun with their close group of friends that they all affectionately named the “DOZI’s.” She continued to enjoy her growing family which included 20 grandchildren and 25 great-grandchildren at the time of her passing.

She was a quiet, well-read and informed wife, mother, grandmother, great-grandmother, sister, aunt and friend. Her petite stature and humble, mild manner did not portray her immense strength, courage, kindness and faith. Her children experienced this first-hand as she ran the house and kept everyone in line or in check until “their father got home!”

She provided wise words of advice and was always there when life’s challenges derailed one’s plans. She and her husband instilled values of family and faith by their always-evident example of, “How can we help?”

Bette was preceded in death by her loving husband Don, siblings Kass, Jack and Leo and great-grandchildren Liam, Aliza and Finn.

The funeral Mass was Dec. 21 at SS. Peter and Paul Church, West Chester. Interment was in All Souls Cemetery, Coatesville.

PREVIOUS: IHM sister dies at Camilla Hall, where she served for 50 years

NEXT: Franciscan sister, native of Ireland, dies at 85