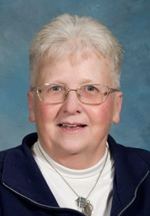 Daughter of the late Royal J. and Alice Gertrude (nee Verville) Bannigan, she was born in Newark, N.J. and attended St. Columba Grade School and Our Lady of Good Counsel High School in Newark.

She entered the Sisters of St. Joseph in September 1963 and professed her final vows in August 1971.

Sister Joan ministered in the archdioceses of the Philadelphia and Newark and the Diocese of Camden.

She is survived by her brother, Roy Bannigan, sister-in-law Dorothy Bannigan and members of her congregation, the Sisters of St. Joseph.