Sister Leona Tucker, one of 12 children, dies at age 95 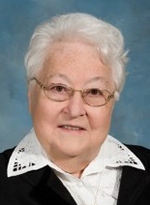 Daughter of the late Martin and Mary Tucker, she was born in Pen Argyl, Pa. and attended Garfield Public Grade School and Pen Argyl High School. She entered the Sisters of St. Joseph in September 1941 and professed her final vows in August 1949.

Sister Leona ministered in the Archdiocese of Philadelphia and the Diocese of Allentown.

She is also survived by members of her congregation, the Sisters of St. Joseph.

The funeral Mass was celebrated Dec. 7 at St. Joseph Villa.

PREVIOUS: Sister of St. Joseph for 75 years dies at 94

NEXT: IHM sister dies at Camilla Hall, where she served for 50 years