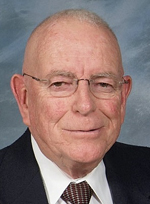 Deacon Coyne was ordained on May 25, 1986, at the Cathedral Basilica of SS. Peter and Paul by Cardinal John Krol. He retired in 2010. His only assignment was Holy Cross Parish, Philadelphia.

Deacon Coyne was predeceased by Betty, his wife of 51 years, and by his daughter Colette. He is survived by his children Betty Ann, Karen, Richard, Chris and Kevin, as well as by seven grandchildren and six great-grandchildren.

Deacon Coyne was a retired information clerk and had served honorably in the U.S. Army between 1951 and 1953. He was a graduate of Northeast Catholic High School and Pierce Junior College.

The funeral Mass for Deacon Coyne was celebrated Monday, Feb. 4 at Holy Cross Church in the Mount Airy section of the city. The principal celebrant and homilist was Father William E. Grogan. The deacon of the Mass was Deacon Edward M. Purnell.

NEXT: Longtime teacher in Montessori method dies at age 85