Give up gossiping for Lent, pope suggests 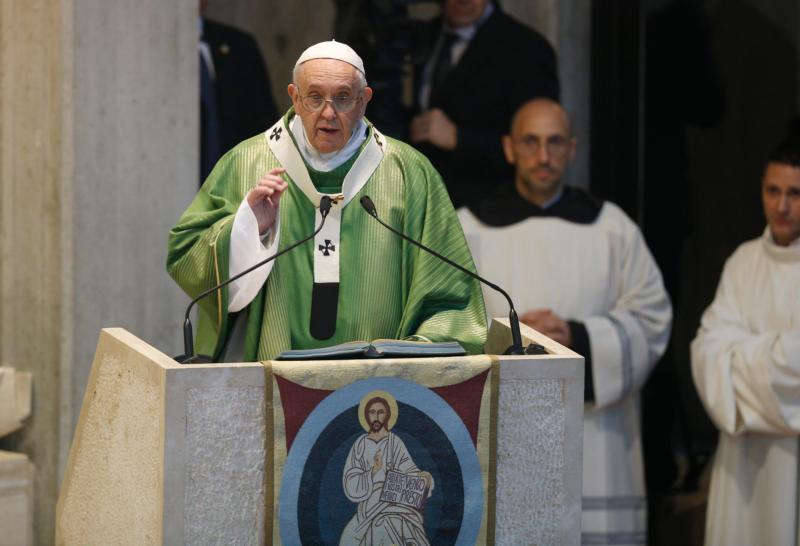 Pope Francis gives the homily as he celebrates Mass at the Parish of St. Crispin in a suburb on the outskirts of Rome March 3, 2019.(CNS photo/Paul Haring)

ROME (CNS) — Lent is a good time to concentrate on fighting the urge to gossip about others and instead trying to correct one’s own faults and defects, Pope Francis said.

Reciting the Angelus prayer at noon March 3 with pilgrims in St. Peter’s Square and visiting the parish of St. Crispin in Labaro, a suburb on the northern edge of Rome, later that afternoon, Pope Francis focused on the line from the day’s Gospel: “Why do you notice the splinter in your brother’s eye, but do not perceive the wooden beam in your own?”

“We all know it usually is easier or more comfortable to notice and condemn the defects and sins of others rather than seeing our own with that kind of clarity,” the pope said at the Angelus.

The pope returned to the passage during his parish visit, telling parishioners that Jesus “wants to teach us to not go around criticizing others, not go looking for others’ defects, but look first at your own.”

If someone were to say, “but, Father, I don’t have any,” the pope said he would explain that “I assure you if you don’t notice you have any here, you’ll find them in purgatory! It’s better to notice them here.”

Unfortunately, he said, people seldom stop at just noticing others’ defects, something “we are experts at.”

What almost always happens next, he said, is that “we talk about them,” not telling the person to his or her face in a way that could help the person improve but indulging freely and happily in gossip.

“It’s something that because of original sin we all have, and it leads us to condemn others,” the pope said. “We are experts in finding the bad things in others and not seeing our own.”

Speaking the Sunday before Lent was to begin, Pope Francis said it would be great if everyone tried during Lent to reflect on Jesus’ words to see the faults only of others and on the temptation of gossip.

Catholics should ask themselves, “Am I a hypocrite who smiles and then turns around to criticize and destroy with my tongue?” He said. “If, by the end of Lent, we are able to correct this a bit and not go around always criticizing others behind their backs, I assure you (the celebration of) Jesus’ resurrection will be more beautiful.”

The young people asked him questions, including about how to be good and resist temptation.

Beginning his response, Pope Francis asked the youngsters if they knew who the “boss of wickedness” is. “The devil,” they replied.

“But the devil’s a fantasy; he doesn’t exist, does he?” the pope asked.

“Yes, he exists. It’s true,” the pope told them. “And he is our worst enemy. He’s the one who tries to make us slide. He’s the one who puts evil desires and evil thoughts in our hearts and leads us to do so many bad things.”

The way to resist the devil, he said, is to pray to Jesus and to his mother and to talk to one’s parents, catechists or priests when temptation is lurking.

Prayer and talking to someone good and wise also is important when trying to make a decision, he told them in response to another question.

“We can all make mistakes,” Pope Francis said. “Even I can make a mistake?”

“The pope can make a mistake?” he asked just to make sure he understood them.

When they responded in the affirmative, he told them they were right, and that when someone has a decision to make, prayer and seeking advice can help.

PREVIOUS: The Stations of the Cross

NEXT: Rules for fasting and abstinence