Judge not, because we are all prodigal children 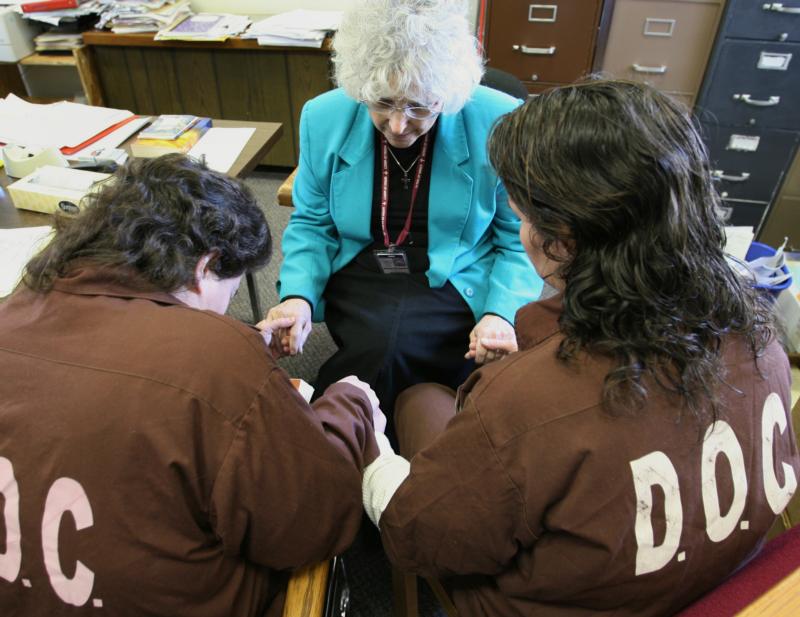 Mercy Sister Natalie Rossi, chaplain for the State Correctional Institution for Women in Cambridge Springs, Pa., prays with two Catholic inmates. Pope Francis calls on us to smell like the sheep, to go into the peripheries and minister to those in need. (CNS photo/Bob Roller)

On this Fourth Sunday of Lent, we hear the parable of the prodigal son. When I was a kid, my father spoke to me in Dichos, also known as proverbs. He used to tell me, “Di me con quien andas y te digo quien eres.” Tell me who you run with and I will tell you who you are.

It was obvious to me as a kid growing up in one of the oldest, toughest neighborhoods within the pocket of poverty as to what he was telling me, as I still think of this Dicho today. We might ask ourselves which son in the story is the prodigal. Our immediate response may be, well of course the son who squandered his share of the estate, he was the sinner!

Yet as we read the story, we realize that both sons were prodigal sons! The first son came to realize that his father loved him because he was able to forgive him. The second son out of envy was not able to do so; he was blind to forgiveness, thinking he was doing everything his father asked of him.

We are all prodigal children in some way or another.

Our Catholic faith calls us to action by practicing the works of mercy (Mt 25:35-40). Pope Francis calls on us to smell like the sheep, to go into the peripheries and minister to those who are not like us. Jesus reminds us of this when he is on the crucifix on Good Friday, “Forgive them, they know not what they do” (Lk 23:34).

It is rather difficult to go into the peripheries and minister without judgment to those who are not like us.

In 2013, I became the director of pastoral outreach for the Archdiocese of Santa Fe, New Mexico. My first task was to visit one of our state-run prisons. I had a lump in my throat and was scared to enter; I was definitely not in my comfort zone. As I entered the facility and the doors closed behind me, I could feel fear in my gut.

Inside I was greeted by a seemingly 7-foot man weighing about 280 pounds. He was covered with tattoos from head to toe. I greeted him by saying good morning; he did not flinch and stared right through me. I invited the man to join our Bible study and he did not bat an eye!

As I conducted the Bible study with the other men, I could feel him staring at me. I proceeded to take a break and I told him “I’ll be back!” He did not think this was very funny and continued to stare right through me.

On my return, I said; “I’m back.” Once again he stared me down. As I continued the Bible study, I noticed he was calling me with his forefinger without saying a word. The rest of the men gasped, “Oh, oh!”

I got up and went up to this giant man and he said, “Deacon, do you mind if I join your Bible study?” I smiled at him and said, “Of course not, but why did you not respond to me earlier?”

My fear immediately went away. That day this giant of a man ministered to me as the rest of the men did that day!

The moral of the story: One must forgive to love with an open heart!

I would like to share a final Dicho; my father used to say to me, “Los dedos del mano son diferente como la familia; pero cada dedo necesita la mano.” The fingers of the hand are different just like a family, yet every finger needs the hand. God is the hand, we are his fingers, eyes, feet, ears and mouth!

May we portray the image of Jesus Christ to all we encounter, especially those in the peripheries!

Deacon Robert Vigil is director of pastoral outreach for the Archdiocese of Santa Fe, New Mexico, and serves at Sacred Heart Parish in Albuquerque. Ordained for 12 years, Deacon Vigil has been married for 32 years and has three children.

PREVIOUS: Which of the prodigals are you, and how will your story end?

NEXT: Accept the Father’s mercy, offer it to all