From shame to hope through faith in Christ 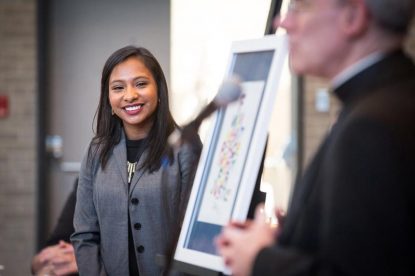 I recently read a column titled “A Frightened People” by Hosffman Ospino. He writes about Latinos’ reality in the U.S. and gives a voice to Latinos who are living in the shadows. The infamous, broken immigration system in this country is hurting Latinos, and, therefore, the church hurts as well. If you haven’t read it, I highly recommend it.

I have been reflecting on this article for a few weeks now. I was challenged by this piece. It almost hit too close to home for me. It made me completely uncomfortable. It brought my shame to light, but it gave me hope.

I am a young Latina working in the administration of the Catholic Church. I constantly find myself in living two extremes. On one end, I am running around trying to prove to the world that I deserve to be here. On the other hand, I am trying to prove to others that I am still one of them.

If you’ve seen the movie, “Selena,” my life can be summarized in one scene. Remember Selena’s father explaining to her why she couldn’t interview in Mexico?

I realized why I’ve been so exhausted. I’ve been trying to live in two very different realities. I’ve been living out of fear. Truly, the political rhetoric and obvious division in our church is hurtful.

Over the past few weeks, I have had to ask myself once again, where is my hope?

Coincidently, I had recently purchased Brené Brown’s audiobook, “Dare to Lead.” I was in need of something other than news for my commute.

Inspired by Brené, I decided to unveil the shame I’ve been carrying around. My shame is directly associated with my Latina-ness.

Being an immigrant became my source of shame. I believed that I had to prove my worth. For the past two years, I walked with my head down low, hoping that no one would notice the incredible pain coming from my fears.

Brené Brown teaches that shame has its greatest power when it’s unspoken. Silence is its strength. However, we can overcome shame. We, Latinos, have to actively choose not to be defined by fear of an uncertain future.

I am a young adult professional. I am a graduate student. I am an employee. Yet still, my future is uncertain. And, I choose not to be defined by these not-so-dark and quite hopeful realities.

Instead, I choose to be defined by God’s love, to be embraced by his grace, and to dare to hope for the future.

I hope we, as church, choose to live in solidarity with millions who have to live the Latino reality of today. We might not be able to fix the broken system tomorrow, but we can certainly help others feel not so alone. We must dare to walk with the wounded of today. Dare to be like Christ.

Edith Avila Olea is associate director of the justice and peace ministry in the Diocese of Joliet, Illinois. She is completing a master’s degree in public policy at DePaul University in Chicago.

PREVIOUS: Forty days and a wedding

NEXT: A letter to Archbishop William E. Lori on his pastoral on racism