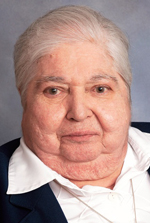 Sister Mary D. Iavarone, I.H.M. (formerly known as Sister Maria Dominica), died Feb. 3 in Camilla Hall, Immaculata. She was 87 years old and in the 66th year of her religious life.

Born in Philadelphia, she entered the Congregation of the Sisters, Servants of the Immaculate Heart of Mary on Sept. 8, 1952 from Most Blessed Sacrament Parish in Philadelphia. She pronounced her first vows on March 3, 1955.

During the course of the next 40 years, Sister Mary taught in many elementary schools in the Archdiocese of Philadelphia and for a brief time in Annandale, Va.

From 1991 until August 2007, she served as a tutor/school assistant then moved into pastoral work visiting the sick and elderly in their homes as well as in the hospital.

Sister Mary’s final act of service was to the Apostolate of Prayer in Camilla Hall in August 2007.

The funeral Mass was celebrated Feb. 6 by Father William Dean at Camilla Hall.

Sister Mary is predeceased by her parents Stanley and Pierina Costantini Iavarone; her sister, Felicia Cacciavillani (Amadeo); and her sister-in-law Virginia Damiani. Sister Mary is survived by her brothers Andrew (Doris) and Victor Damiani, and her congregation of I.H.M. sisters.

NEXT: Sister Loretta Tiernan dies, was teacher and pastoral minister