Devil targets those who succumb to despair, negativity, pope says 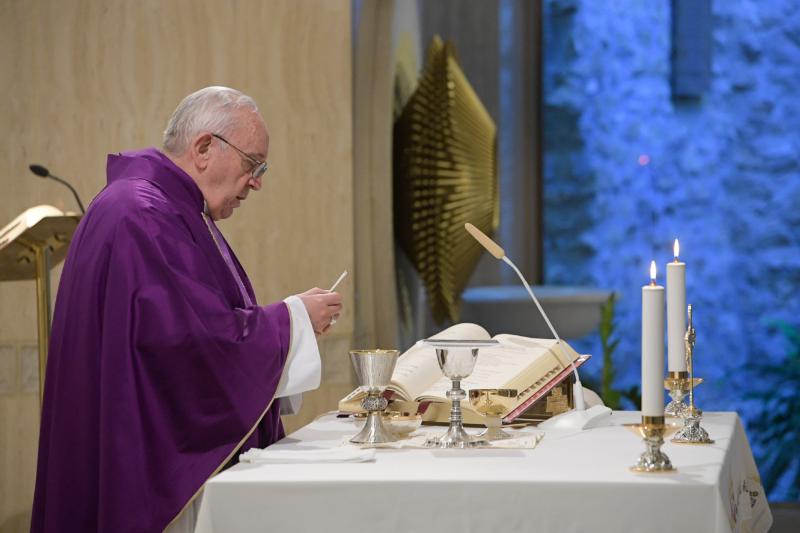 Pope Francis holds the Eucharist during morning Mass in the chapel of his residence, the Domus Sanctae Marthae, at the Vatican April 9, 2019. The pope said the devil targets those who succumb to despair and negativity. (CNS photo/Vatican Media)

VATICAN CITY (CNS) — Sometimes Christians seem to prefer complaining and being unhappy in life, but that makes them a perfect target for the devil, Pope Francis said in a morning homily.

“Desolation is from the serpent,” who tempted Eve in the Garden of Eden and who “always bites” when a person sinks in despair, the pope said April 9 at morning Mass in the chapel of his residence, the Domus Sanctae Marthae.

In his homily, the pope reflected on the first reading from the Book of Numbers (21:4-9) in which the people of God, after escaping slavery in Egypt, lose their patience and complain about their difficult situation, “worn out by the journey.” God punishes them by sending venomous serpents, but then offers an antidote — a chance at salvation — after the people recognize their sin of complaining against God and Moses.

The sensation of being “worn out removes hope from us,” the pope said. Fatigue gives people a “selective” memory; “it always makes us see the bad side of what we are going through and forget the good things that we have received.”

“When we are in anguish, we cannot stand the journey and we seek refuge either in idols or in grumbling” or in other ways that show nothing is pleasing or satisfactory, he said.

“This is the life of many Christians. They live by complaining, criticizing, grumbling, (being) dissatisfied,” preferring to see everything as a failure or worthy of complaint, he said.

But what they don’t realize, he said, is that this turns them into the “perfect terrain for the devil to sow.”

Pope Francis asked that everyone pray to God to “free us from this sickness” — this fear of hope and healing, the fear of the Lord’s consolation and resurrection.

PREVIOUS: Sparks among the stubble

NEXT: A guided meditation on Christ’s last words