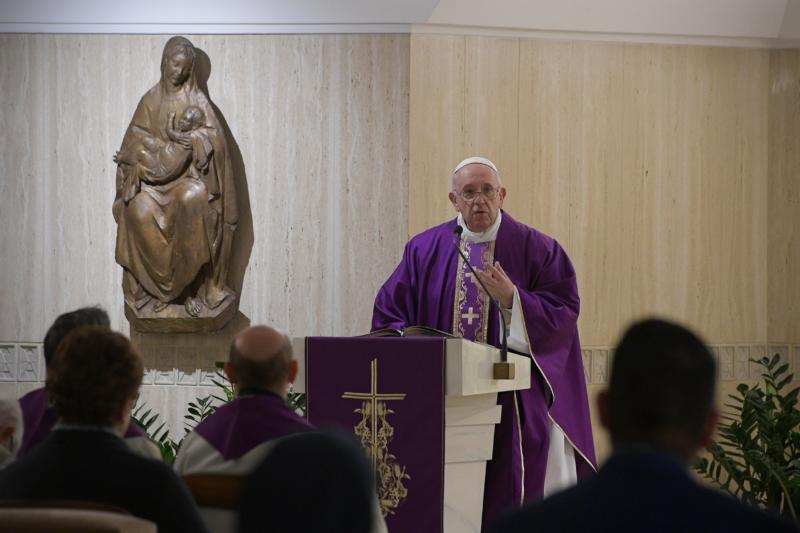 Pope Francis gives the homily during morning Mass in the chapel of his residence, the Domus Sanctae Marthae, at the Vatican April 4, 2019. In attendance was President Sergio Mattarella of Italy. (CNS photo/Vatican Media)

VATICAN CITY (CNS) — Christians must be courageous when praying to God and not simply repeat prayers “like a parrot,” Pope Francis said.

“In common parlance, people use an expression that I really like when they have a goal: ‘I put it all on the line.’ In intercessory prayers, this also applies: ‘I put it all on the line’; it is the courage to go forward. But perhaps the doubt may arise: ‘I do this, but how do I know the Lord listens to me?’ We have a certainty: Jesus. He is the great intercessor,” the pope said in his homily April 4 during his morning Mass at Domus Sanctae Marthae.

Alessandro Gisotti, interim Vatican spokesman, told journalists that Italian President Sergio Mattarella was among those present at the morning Mass.

In his homily, the pope reflected on the day’s first reading from the Book of Exodus in which Moses intercedes with God on behalf of the people of Israel, who had fallen into sin.

The Bible, he said, is full of examples of holy men and women who prayed fervently to God, almost as if “they were arm-wrestling” with him. They do so, he explained, because they “had faith that the Lord would give them grace.”

Jesus, too, the pope said, “prays for us at this moment” and no matter what way Christians pray, it is Christ “who takes my prayer and presents it to the father.”

“Jesus does not need to speak before the father: he shows him his wounds. The father sees his wounds and gives us the grace,” Pope Francis said. “When we pray, let us remember that we do it with Jesus. When we do a courageous prayer of intercession, we do it with Jesus,” the pope said.

NEXT: Sparks among the stubble