A hard time to find workers, and parish catechists

How do we respond to the anger in our nation?

Becoming what we receive, for better or worse

A clear eye on the whitewashing of Planned Parenthood

The pro-life film “Unplanned” has exceeded expectations, recouping its $6 million filming budget on its first weekend in theaters. At this writing, it has taken in over $17 million — despite the fact that many television stations and social media sites refused to accept advertising for it.

It depicts the true story of Abby Johnson, a Planned Parenthood clinic director in Texas who left her job and converted to a pro-life position. That conversion was remarkable by any standard, as she had undergone two abortions herself and was once “employee of the year” at her Planned Parenthood affiliate in Texas.

The movie recounts how she was changed by some truths about abortion — and by the realization that the pro-life protesters at her clinic cared more about women than her employer did.

The story is emotional, and at times difficult to watch. It received an R rating for violence, a backhanded tribute to the violence involved in abortion.

Perhaps even more remarkable than the movie are the hysterical attacks on it from some film critics.

Nick Schager of The Daily Beast calls it “a leaden, self-righteous and wholly rancid affair.” Owen Gleiberman of Variety says this “absolutist and extreme” film begins as “a pro-life alarmist horror movie.”

In the online version of New York Magazine, Caitlin Moscatello even calls Unplanned “a movie that could get someone killed” by inciting crazed pro-lifers to murder.

(The film’s only reference to such horrors is that, when Abby and her husband hear of abortion doctor George Tiller being murdered, they fear for her own life. The film portrays most abortion clinic workers as personable and caring, if misguided — it aims at a change of heart, not violence.)

Such reactions are so overwrought that they recall the old military pilot’s phrase: When you’re getting flak, you must be over the target.

These reviewers also say the film is grossly inaccurate about Planned Parenthood. Let me comment on this. 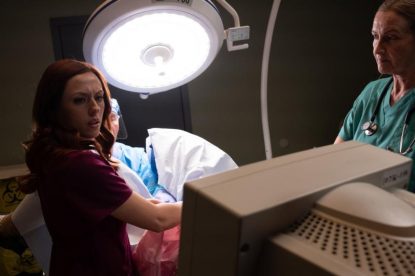 Abby Johnson, portrayed by Ashley Bratcher, reacts to what she is seeing on the ultrasound screen while assisting with an abortion in this clip from the movie “Unplanned.”  (CNS photo/courtesy www.Unplannedfilm.com)

Is Schager right to sneer at the claim that Planned Parenthood is “a billion-dollar corporation”? Its own annual report shows it taking in almost $1.7 billion in the year ending in June 2018, netting almost $245 million over expenses.

Moscatello, for example, says abortion is only 4% of its services. But the annual report shows that 97% of the organization’s pregnancy services are abortions.

Cecile Richards, when she was CEO of Planned Parenthood, called it “obscene and insulting” to suggest that her organization might get out of the abortion business to maintain and increase its federal funding; her successor, Leana Wen, has said that “providing, protecting and expanding access to abortion” is part of Planned Parenthood’s “core mission.”

Since 2013, Planned Parenthood has required all affiliates to have at least one clinic performing abortions on-site. It lost a few affiliates in the process.

Does Planned Parenthood rely on abortion for its financial bottom line? From 2004 to 2017, its other services — Pap tests, breast exams, cancer screenings, even contraceptive services — markedly decreased. Even total number of clients decreased from 3 million to 2.4 million. Two things increased: Abortions performed (now over a third of all abortions in the U.S.) and revenues.

In 2011, when the Susan G. Komen breast cancer foundation decided that its relatively small donations to the organization for breast exams could be more effectively spent elsewhere, Planned Parenthood unleashed a vindictive public relations campaign that brought the organization to its knees. The book about this by former Komen senior vice president Karen Handel is titled “Planned Bullyhood.”

I hope “Unplanned” changes some hearts and minds on the subject of abortion — and encourages greater scrutiny of the nation’s largest abortion provider.

PREVIOUS: The women who stayed

NEXT: Dare to break bread with others, risk seeing Jesus’ face