Like women at the tomb, it takes courage to witness Jesus 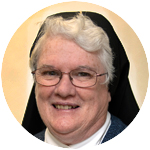 The second Sunday after Easter in the Greek Orthodox Church is referred to as Myrrhbearer Sunday. The women who went to anoint the body of Christ after his crucifixion are remembered and honored on this day. These are the women who invite us to enter more deeply into the role of women in the resurrection.

Women were not credible witnesses in the time of Jesus’ public ministry yet it is women who are the first witnesses of the resurrection. It is the women who were the first to proclaim that Jesus had risen from the dead and they are the ones who announced this to the apostles. These women were determined to bury Jesus properly, according to Jewish law.

These are the women who came in the dark bearing the precious myrrh to anoint the body of the one they loved whom they had seen crucified and buried. They were not afraid to be out alone in the dark in order to perform this act of mercy and kindness. They were wondering how they were ever going to move the stone that blocked the tomb. Yet they didn’t hesitate to do what had to be done for the one they loved.

They demonstrate the courage and fidelity that the apostles lacked. These women were the same ones who were at the foot of the cross and followed the body of Jesus in order to know where he was laid to rest.

Imagine finding the stone rolled away! Imagine finding young men in dazzling clothes! Imagine those same men telling them that Jesus was not among the dead but was risen!

In my own life, I am not called to be out in the darkness to anoint bodies or roll away stones. I have not encountered angels in dazzling clothes telling me someone was risen from the dead.

Yet I, like these women, am called to be a myrrhbearer. A myrrhbearer is anyone who is willing to bring comfort and solace to another. These women challenge us to leave our security and to put aside conventional thinking and rules in order to care for one another.

You are a myrrhbearer not only in the big, noticeable moments of life but more importantly throughout the ordinary moments of the day.

Think back on the past week. How many times were you the recipient of the myrrh of others? Were you complimented on something you did or said? Did someone tell you something good about you? Did someone let you in the traffic line? Most of us find it easier to be a myrrhbearer that to be a recipient.

Myrrhbearers come in all different sizes, colors, creeds. It is essential that we simply open our eyes and hearts in order to see them in our lives. We need to not be afraid to bear myrrh to others in whatever way we can. We need to go with the women in the darkness, wondering how we are going to move stones in order to love others. We need to proclaim the news that Jesus is risen, alleluia!

PREVIOUS: Look at what we’ve done

NEXT: Road to true progress