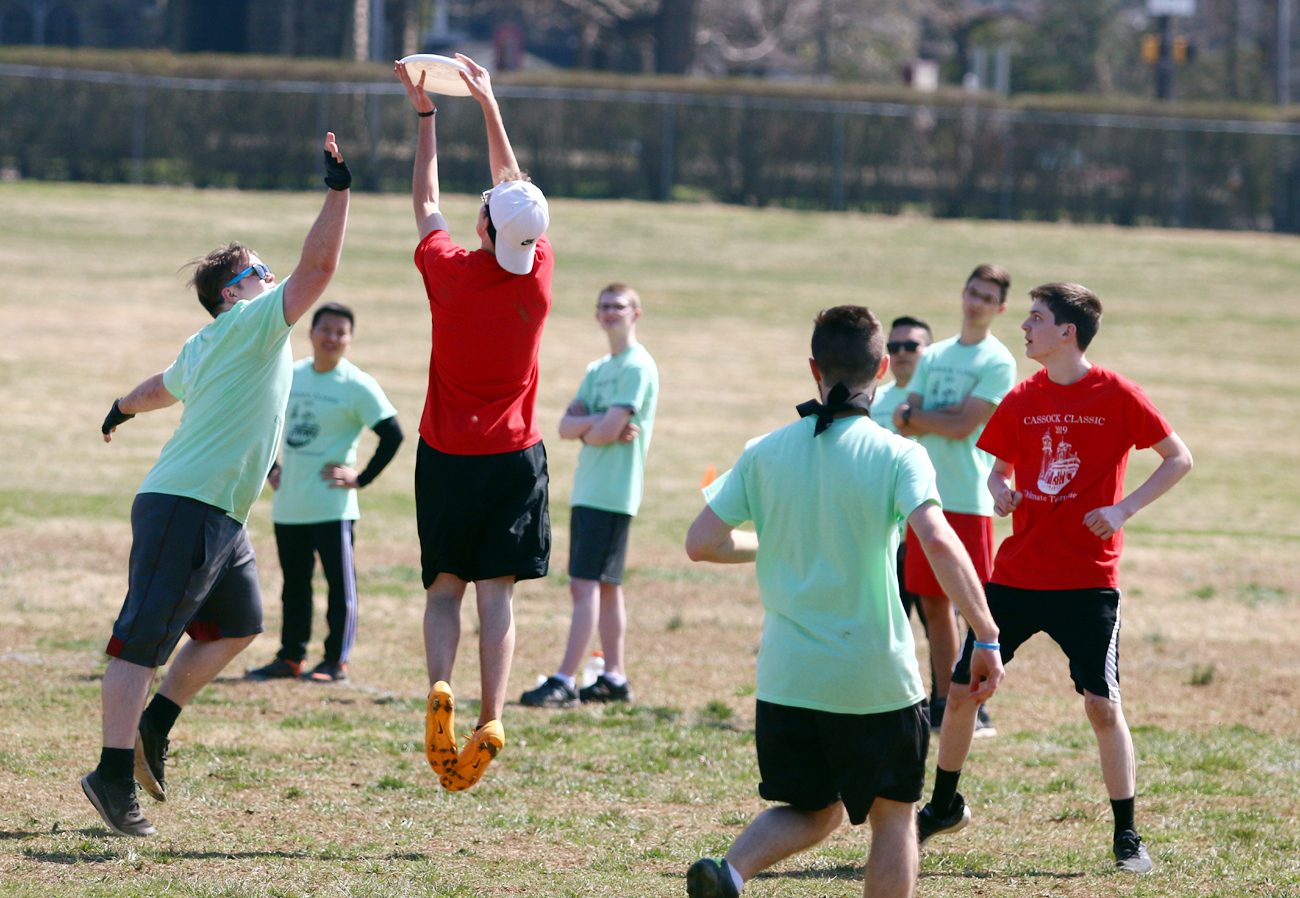 It was an opportunity for Catholic young adults to have some fun playing Frisbee and build friendships under the day’s warm sunshine. The coed “Ultimate” tournament also provided young men a unique opportunity to get a glimpse of seminary life.

Joining them in the competition were approximately 40 seminarians from St. Charles, some of whom formed their own team while others joined the rosters of the various young adult groups. Eight teams total took part in the tournament, which is open to competitive and non-competitive players alike.

“As Catholics, it’s so important for us to build up community and so this is really meant to be a friend-building event,” said Father Stephen DeLacy, director of the archdiocesan Office of Vocations for Diocesan Priesthood, which sponsored the event. “It also serves the purpose of getting the young men on the campus here (at St. Charles), breaking that ice for those who may be discerning a call to the priesthood.”

“Ultimate” is a non-contact sport played with a Frisbee in a style similar to football. Alison Joyce, of the Catholic Young Adults of Chester County, plays Ultimate competitively for the Philadelphia Area Disc Alliance, and has participated in three Cassock Classic tournaments.

“I love it as a chance for young adults from all over the (arch)diocese to come together, build friendships (and) make connections,” said Joyce. “It’s great to get to share my love of the sport with my friends and the new friends that I make.”

Duncan McLuckie, a member of Metanoia, a young adult group from Montgomery County, was a newcomer to the Cassock Classic.

“The Catholic community is pretty tight, so I know a lot of people from all over,” said McLuckie. “It’s good catching up with people.”

Seminarian Randy Kraft has participated in the past five tournaments. He likes the Cassock Classic because it is an event “where young people can come together who love Jesus,” he said. “It’s a sign of hope, I would say, that there’s so many people who are passionate about their faith and want to make it a part of their lives. I just think that this event is a good opportunity for friendship, fellowship and fun.”

Father DeLacy originally conceived the idea of holding an Ultimate tournament for the purpose of fellowship while serving as chaplain for Metanoia, with the Montgomery County group hosting the event.

“Well, then I was reassigned to the vocation office and I thought, ‘God doesn’t want me to use that idea for Metanoia, he wants (me) to use the idea as vocation director and bring it here to the seminary,” said Father DeLacy. “When (young men) have already visited the seminary and they have a sense of what the seminary is, it takes away some of the anxiety of the potential mystique of the seminary. They recognize that seminarians are ordinary guys.”

Seminarian Greg Miller has organized the past five tournaments. An Ultimate player throughout high-school, he has played in all six Cassock Classics. “I’m really happy I can continue (playing) now,” he said. “It’s a fun day to see the Catholic young adults in Philadelphia. That’s what this day is all about: getting together, getting to meet new people and having a fun game of (Ultimate).”

Bishop Timothy Senior, rector of the seminary, celebrated Mass for the attendees before the tournament began on Saturday. During lunch break in the refectory, seminarian Henry Graebe spoke to attendees, sharing with them his vocation story. 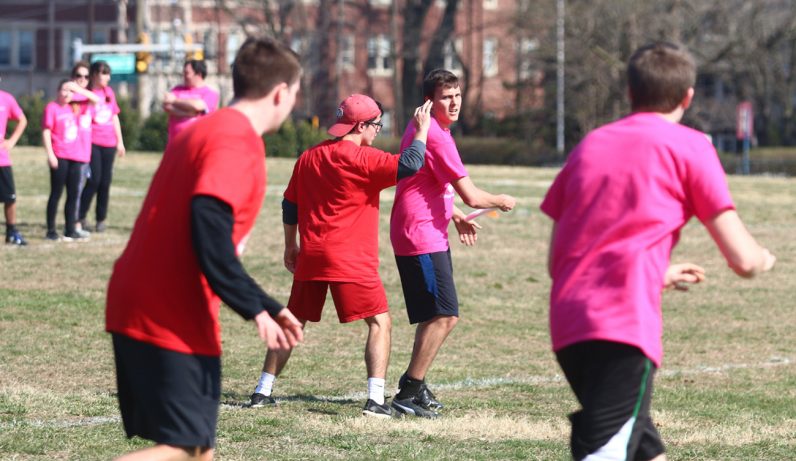 Young adults from across the Philadelphia Archdiocese came to St. Charles Seminary on a sunny Saturday, April 6 for the sixth annual Cassock Classic Tournament. (Sarah Webb)

NEXT: Named for the common man, St. David’s marks 100 years