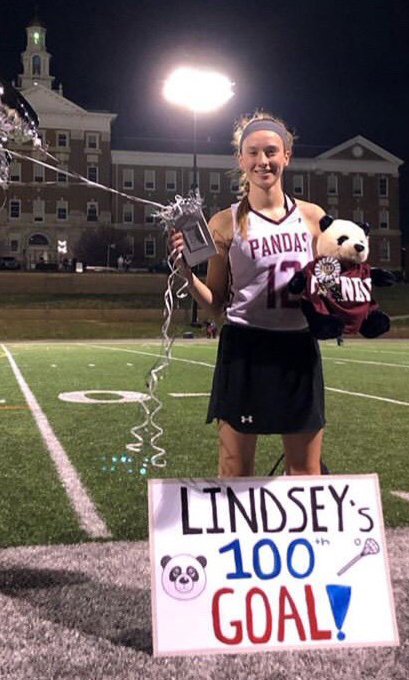 Bonner-Prendergast junior Lindsey Fagan proudly shows the mementos from family and friends as she passed 100 career goals during a win over Little Flower April 4. (Photo by Dan McCarty)

The 100-point club continues to grow in the girls’ lacrosse program at Msgr. Bonner and Archbishop Prendergast High School.

Junior attacker Lindsey Fagan crossed the milestone by scoring her 100th career point during a 25-4 rout of Little Flower on April 4.

The prolific scorer is just the latest in a line of Prendie standouts. In 2017, Paige Brady and Keeley Weiss achieved the 100-goal milestone together. Last year, Carly Brosious’ career goals hit triple digits.

While scoring 100 goals had been on Fagan’s mind since freshman year, the fact that several teammates also achieved it only made her all the more motivated to make it happen as well and become another member of the club.

“I have been working towards it since my first game as a freshman,” she said.

While this was a huge accomplishment, Fagan is wasting no time aiming for a 200-goal career. With an additional season ahead, she believes that is well within her reach.

“I was able to accomplish that as a junior but I immediately started thinking about the 200-goal milestone,” she said.

Fagan began playing lacrosse in second grade and has competed with the Interboro Young Bucs as well as three club teams including Philadelphia Youth Lacrosse (PYLA), Envy and STEPS Philly Elite. During the fall season, she can be found on the volleyball court.

Fagan also is a member of Bonner-Prendie’s National Honor Society.

She is currently in the process of looking at colleges but since she is still in her junior year, she is not sure what school she will attend or what major to pursue. She does expect to take her lacrosse career to the collegiate level regardless of her area of study.

“I haven’t decided but I’m interested in the majors that deal in some way with athletics,” Fagan said.

PREVIOUS: Team play keeps Little Flower in every game, even at last out

NEXT: As seasons wind down, Catholic teams jockey for playoff spots