God leads us through the storms of life

Loving our enemies: mission impossible, but not for God

Don’t forget a rose for our spiritual mothers 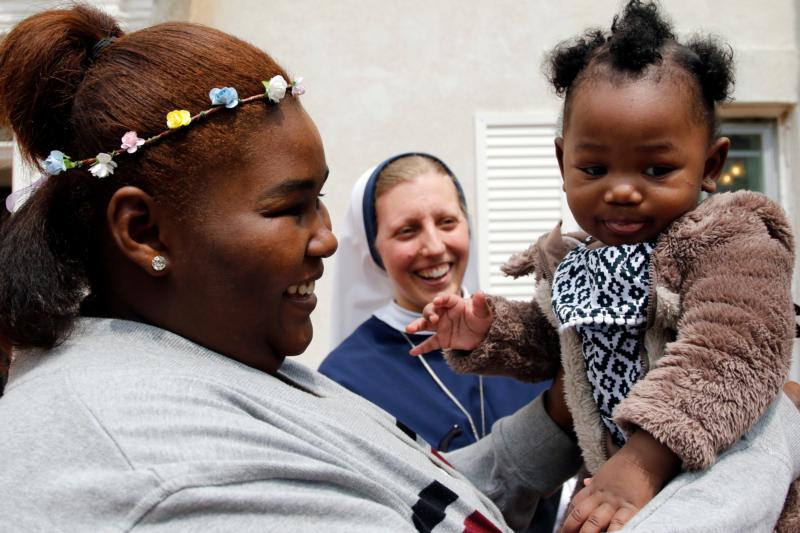 A woman holds her baby as Sister Brigid Ancilla, a member of the Sisters of Life, looks on during the annual Mother’s Day celebration at the religious community’s retreat house in Stamford, Conn. When Mother’s Day rolls around, don’t forget to wish all women — married, single, consecrated — a happy Mother’s Day, for all are mothers by our feminine gifts that bring to the world graciousness and blessing. (CNS photo/Gregory A. Shemitz)

Sometimes it becomes awkward in church on Mother’s Day when at the end of Mass the priest asks mothers to stand for a blessing. As a religious sister I’ve been in the position of half-standing, half-sitting, unsure of what to do, or even if “spiritual mothers” are included in that prayer.

If I stand, would people think I actually have children? Do they really see me as a spiritual mother? Ugh. It becomes complicated, so I slip into a noncommitted sit-kneel position.

As I leave church they pass out roses to the women. One man didn’t want to give me a rose because that was only for mothers. I just stared at him — somewhat pathetically — and he reluctantly gave me one!

Since I entered religious life in the mid-’80s I’ve heard the term “spiritual motherhood” in relation to the missionary work of sisters.

In my community, the Daughters of St. Paul, it was in reference to our media ministry, since we minister to people we do not encounter physically, but through books, music, movies and every form of media.

We were taught that we feed those who are “spiritually poor” and offer spiritual nourishment for the soul. However, the first time I really reflected on this theologically was while reading St. John Paul II’s document, “Mulieris Dignitatem,” “On the Dignity and Vocation of Woman.”

In it he reflects that the two paths of motherhood and virginity are found in Mary. She became the perfect example of both paths because her motherhood did not come from the physical intimacy but through the Holy Spirit, therefore remaining a virgin even after the Incarnation.

Though virginity is the renunciation of marriage and physical motherhood, there is a spousal love that captures the heart so that love is birthed through the outward expressions of daily self-gift. These expressions are the small, seemingly insignificant ways unmarried women share their life and love with the world.

St. John Paul writes, “The dignity of woman is measured by the order of love.” It is this love that is the heart of all motherhood.

Pope Francis follows his predecessors by recognizing the dignity of women and the necessity for the church to have them present at its heart. He has appointed more women to positions traditionally held by men than any other pope.

He also emphasizes that Mary was at the spiritual center of the church in the upper room and that the faith of the apostles was nurtured, sustained and developed through the presence of Mary as a spiritual mother.

What does this mean for us? The “feminine genius” that St. John Paul referred to in the “Theology of the Body,” is the ability to gather people together, to share life, give comfort and support, while also influencing society with a particularly feminine way of seeing the world.

I don’t go about my day thinking: “I’m now being a spiritual mother to all these people to whom I am speaking at this conference.” However, without conscious awareness, I am that for the people I encounter by my spousal love with the Lord whose love speaks, acts and works through me for others.

I am not my own, but I belong to the One whose love embraces the whole world, every person and each creature. Every woman can say the same thing.

I am like Mary, that instrument of God, the “reed of God” swaying in the wind bending in flexibility to the will of the Divine Lover, as the English mystic Caryll Houselander would say. These characteristics make spiritual motherhood tangible and intelligible.

I remember being in our Pauline Books & Media center in New York City assisting a patron who was looking for a gift for a friend who was suffering from cancer. I showed her several prayer books that could guide her friend to go through her terrible suffering with purpose and grace.

I began to feel the pain of the woman seeing her friend suffer while feeling helpless to assist her. At a loss, she came to us for guidance. As I spoke, she looked at me and said, “You are in love, aren’t you?” I was taken back by her comment, thinking what an odd thing to say!

Then I realized what she meant and responded with absolute assurance, “Yes. Yes, I am!”

The Lord is never outdone in his generosity to us! He even sent me someone who made me discover the heart of my vocation at a time when I felt a bit discouraged and unsure about the future.

That moment of spiritual motherhood became a moment of grace for both of us, and hopefully for her ill friend as well.

When Mother’s Day rolls around, don’t forget to wish all women — married, single, consecrated — a happy Mother’s Day, for we all are mothers by our feminine gifts that bring to the world graciousness and blessing. They are nurturers, gatherers, supporters and lovers. So please give us all a rose!

Sister Nancy Usselmann is a Daughter of St. Paul and director of the Pauline Center for Media Studies in Los Angeles. She is a theologian, film reviewer, blogger for BeMediaMindful.org and author of “A Sacred Look: Becoming Cultural Mystics.”

PREVIOUS: Jesus the shepherd promises union in the hand of God