Laity can lead the way in renewing the church, speaker says 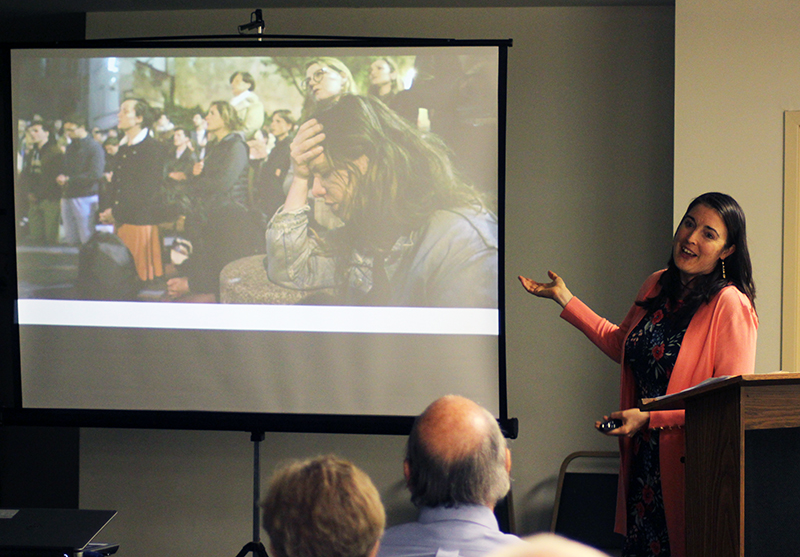 Meghan Cokeley, director of the archdiocesan Office for the New Evangelization, delivers a May 29 talk at St. Hilary of Poitiers Parish in Rydal on how the laity can help to heal a church wounded by scandal. (Photo by Gina Christian)

The laity can lead the way in renewing a church wounded by the decades-long sexual abuse scandal, said Meghan Cokeley, director of the Archdiocese of Philadelphia’s Office for the New Evangelization, during a May 29 session at St. Hilary of Poitiers Parish in Rydal.

Prayer, redemptive suffering, forgiveness and a deeper understanding of the laity’s calling can radically revive the church, said Cokeley, who has been touring area parishes to deliver her talk entitled “What Can We Do? The Role of the Laity in a Time of Crisis.”

Combining Scripture, catechesis and historical examples, the presentation offered “a message of hope” as well as several specific action points to counter feelings of despair and apathy in church life.

In her talk Cokeley cited the devastating April 15 fire at Notre Dame Cathedral as “a sign God gave us for these times,” one that showed a church “scarred, but still standing.”

She noted that as the 850-year-old structure burned, lay bystanders “instinctively ran into the street, rosaries in their hands, praying on their knees and singing hymns” despite grim predictions that the cathedral would be completely destroyed.

Cokeley pointed out that while the crowd prayed, firefighters formed a human chain to save many of the cathedral’s relics and to enable the brigade’s chaplain, Father Jean-Marc Fournier, to remove the Blessed Sacrament.

“They say the faith is dead in France. It’s not,” said Cokeley. “Our prayer matters.”

That same passion, she said, is present in the sensus fidei fidelis (“sense of faith of the faithful”), which can help the church to navigate troubled waters, especially when leaders forsake the helm.

Often confused with public opinion in the pews, the sensus fidei was defined in 2014 by the Vatican’s International Theological Commission as a “supernatural instinct” for “the truth of the Gospel,” which enables active, properly formed Catholics to recognize “authentic Christian doctrine and practice” while rejecting falsehood.

Cokeley noted that a dramatic example of the sensus fidei can be found in the laity’s rejection of Arianism, a widespread fourth-century heresy that claimed Jesus had been created by God.

Blessed John Henry Newman (whom Pope Francis has greenlighted for canonization) wrote that the laity upheld true church teaching as the heresy prevailed for some 60 years. In contrast, Newman observed, “the body of bishops failed in their confession of the faith,” succumbing to confusion and infighting.

Cokeley also said that by knowing the true purpose of church organizational structure, lay people can more fully embrace their rightful place in the body of Christ.

“There’s a tendency to dismiss the hierarchy due to its failures, or to treat the laity as passive bystanders,” she said. “Both are pitfalls.”

Cokeley used an image of Guercino’s “St. Peter Weeping before the Virgin,” in which the first pope repents to Mary for denying Christ, to illustrate two key dimensions of the church.

Citing the Catechism of the Catholic Church and the writings of St. John Paul II, Cokeley explained that the hierarchical aspect of the church, represented by Peter and therefore called “Petrine,” is designed to ensure the holiness of all its members.

The Marian dimension, named for Mary’s surpassing sanctity and representing the church’s holiness, “precedes the Petrine,” the Catechism states.

Cokeley said that during the clerical abuse crisis, this order “got flipped, and bishops protected themselves at the expense of the laity.”

Intentional, heartfelt forgiveness and redemptive suffering can powerfully redress such wrongs, allowing grace to flow into the lives of both failed leaders and wounded believers, she said.

“When we unite our sufferings with those of Christ — this is where the power is,” she said. “Sometimes people think that it doesn’t do anything, but the saying ‘offer it up’ is true.”

Cokeley acknowledged that while there is a time and a place for activism, the cross shows the true path to transformation.

“The crucifixion of Jesus Christ altered the course of human history,” said Cokeley. “And what was Christ doing on the cross? He wasn’t signing petitions, he wasn’t writing a book, he wasn’t enacting policies, although those can be good. He was praying, suffering and obeying the Father.”

The rosary is a particularly effective form of prayer, said Cokeley, adding that Sister Lucia dos Santos, one of the Fatima visionaries, stressed its unique power to resolve difficulties both great and small.

Displaying an image of Meynier’s “Christ Asleep in His Boat,” in which Jesus sleeps calmly amid raging waters, Cokeley urged attendees to “curl up next to Jesus” in the storm of scandal.

“The reason Jesus is asleep is because he knows who his Father is, and he is anchored in his Father,” she said. “His Father’s got this.”

For that reason, Cokeley said, lay Catholics should recommit themselves to greater involvement in parish life and to evangelization – even if such action seems counterintuitive, given the clerical abuse scandal and the secularized culture.

“God uses the works of the devil for his own purposes,” she said.

“I won’t let a bad wolf push me away from Christ,” he said. “This crisis makes me want to be stronger. Every day is a battle.”

Marissa Baldisano of Visitation B.V.M. Parish in Trooper said the talk reinvigorated her desire to evangelize others, particularly her fellow Millennials.

Admitting that she has often been asked why she remains Catholic, Baldisano reflected that while she felt “let down” by the hierarchy, her faith transcended the failures in leadership.

“I’m Catholic because I love the Lord,” she said, “not because of a priest’s particular goodness or evil.”

The laity “all share in the priesthood of Christ,” said Father Kevin Murray, pastor of St. Hilary, who was pleased that more than 40 attendees had braved severe thunderstorms to attend the May 29 presentation.

Cokeley concluded her talk by encouraging listeners to view “fidelity as a mission,” one that had long-term impact.

“What Can We Do? The Role of the Laity in a Time of Crisis” will be presented at St. Anthony Parish in Ambler on June 5 at 7 p.m.; at St. Stanislaus Parish in Lansdale on Sept. 17 at 7 p.m.; and at St. Andrew Olde Church in Newtown on Oct. 7 at 7 p.m. For more information and to RSVP, visit phillyevang.org/events.

NEXT: Archdiocese pays $19 million+ so far in sex abuse reparations