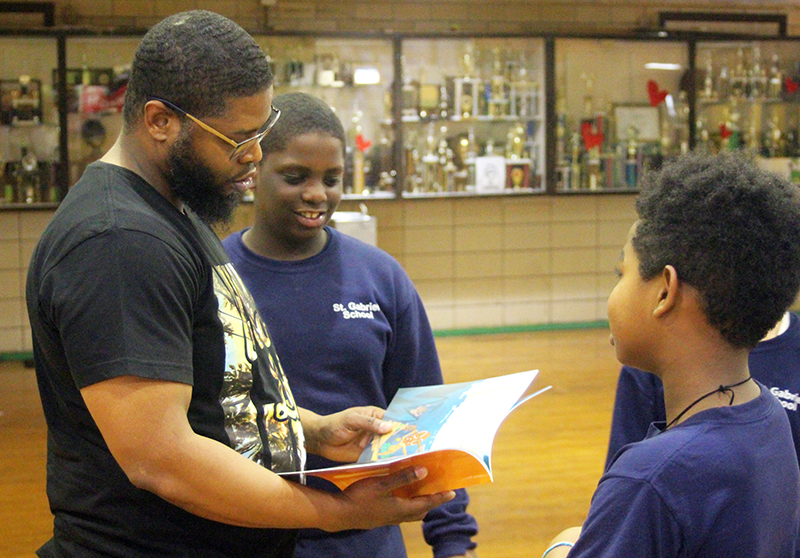 Parents read illustrated books written by students of the St. Gabriel’s Out of School Time (OST) program during a May 3 event at which the center’s new library was unveiled. Located in the city’s Grays Ferry section, the OST site is one of 12 operated by archdiocesan Catholic Social Services. (Photo by Gina Christian)

A new generation of writers is emerging in a South Philadelphia neighborhood, and most of them are under 10 years old.

St. Gabriel’s Out of School Time (OST) program, a ministry of archdiocesan Catholic Social Services (CSS), celebrated the completion of its year-long “Write Brain” literacy program with a May 3 children’s author event.

More than 40 St. Gabriel’s OST students wrote and published their own children’s books, using professionally illustrated templates. The manuscripts were then printed and bound, with each including an author image, biography and dedication.

Located in the Grays Ferry section of the city, St. Gabriel’s OST is one of 12 centers that CSS operates throughout Philadelphia. Established more than 20 years ago, the year-round OST program serves between 700 and 900 at-risk children and teens in grades K through 12 with an array of academic, recreational and social support services. A blend of public and private partnerships funds the OST outreach.

The Write Brain program, made possible by a $2,500 grant from the Mayor’s Fund for Philadelphia, teaches writing strategies and linguistic concepts through a project-based learning approach. Write Brain’s highly structured method, which included games and activities, allowed the students to express their individuality.

“Even with the same illustrations, the kids’ imaginations turned the templates into something completely different for everybody,” said Gabby Patrone, assistant director of St. Gabriel’s OST program. 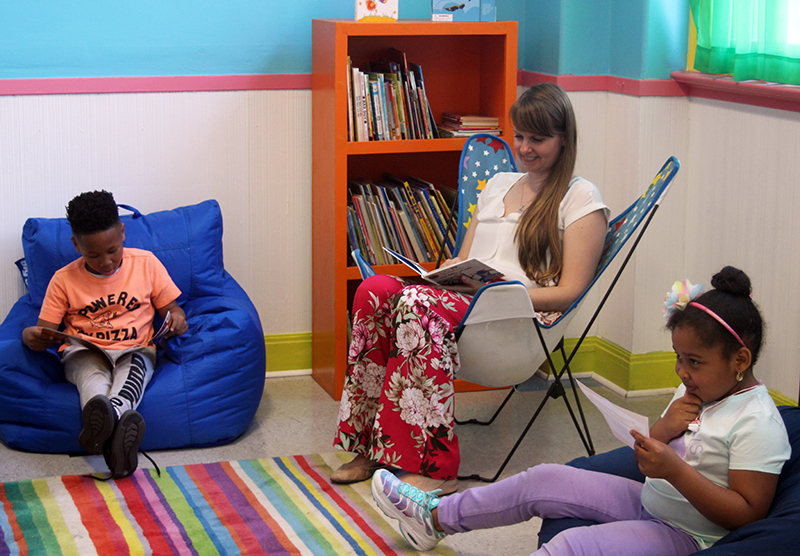 Throughout the project, OST group leaders worked closely with the students to develop their grasp of syntax, synonyms, action verbs and story arcs.

“We really encouraged kids to do more than just describe the pictures,” Patrone said. “We worked with them diligently, and we were a part of each other’s process.”

At the same time, the texts ultimately reflected each student’s unique creative vision.

“All of the books were driven by your kids,” St. Gabriel’s OST director Victoria Robson told parents during the May 3 celebration. “The group leaders just helped them focus.”

The same sense of ownership marked the OST center’s new library, which was also unveiled at the event. Funded by a $1,475 grant from the Dollar General Literacy Foundation, the colorful, chic space — which will include a copy of each student’s book — was designed and decorated by the OST students.

“The kids voted on the paint colors and the mural, and every one of them got to select a book they wanted in the collection,” said Robson. “The older students helped to paint, and organized a fundraiser for the library – and they decided as a group to donate to it as well.”

The students’ efforts were bolstered by a donation from the Girl Scout Junior Troop of St. Ignatius of Antioch Parish in Yardley. To attain their Girl Scout Bronze Award, troop members delivered over 1,800 books to St. Gabriel’s OST library, along with a bookshelf they had constructed and painted.

The months of hard work, along with the generosity of supporters, elicited more than a few tears of joy at the May 3 gathering.

“I was emotional when I saw the books,” admitted OST group leader Janet Reda. “I filled up. The kids were so into this, especially the younger ones.”

Kindergartner Brooklynn Fortson dedicated her book to her mother Korinne, who was impressed with the quality of her daughter’s work.

“At first, they were just showing me illustrations, but I didn’t know it would turn out like this,” Fortson said. “This is beautiful.”

Eight-year-old Joshua Wharton, who authored “Superhero Life,” was also pleased with his own results.

“Life as a superhero is amazing,” he said.

NEXT: Merger of 4 city parishes into one akin to Emmaus journey