Forgiveness, the Holy Spirit’s gift to be given to others 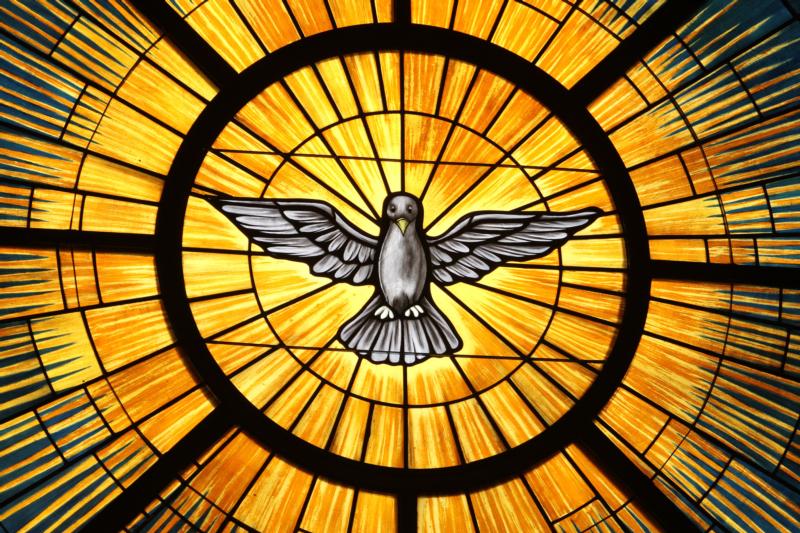 The Holy Spirit, traditionally depicted as a dove, is pictured in a stained-glass window at St. John Vianney Church in Lithia Springs, Ga. We took 50 days to receive the good news of Easter Sunday, that life conquers death; it takes a lifetime, an eternity, to receive the abundant life that God brings in Christ through the Spirit. (CNS photo/Michael Alexander, Georgia Bulletin)

Some things happen in a blaze of splendor like a fireworks display. Others are as simple and sweet as a smooth stone being slipped into a still summer lake. Such was the deceptive quietness of Ruby’s calm remark, one Easter morning.

“My mother called this week,” she said. And after a pause, “I’ve decided I can forgive her.”

It took a moment to absorb the enormity of this decision. All of us, in some way, need to come to terms with childhood wounds.

For Ruby, though, it meant letting go of a lifetime of anguish, starting not just with abandonment by her mother, but being exposed by her to abuse of many kinds from a very young age, repeatedly and throughout childhood and adolescence.

These traumas had long-lasting effects that marked her adulthood and the lives of her own children.

“I guess,” she continued, “as you get older, it gets easier to forgive.”

At first blush, this explanation seemed sufficient, as though forgiving were as natural as getting wrinkles. But no, the mere fact of aging does not predispose people to forgive.

Sadly, it’s not uncommon to meet people who are bitter and resentful, full of packed-down anger that has hardened like a clenched fist over the years — people of all ages.

We are humans, and two of the hardest things for us are giving and receiving forgiveness. Time on its own does not bring this gift.

It may take a lifetime, as with Ruby. In her case, it was the fruit of many years of inner and outer work, and above all prayer.

It didn’t begin the day of her famous announcement, but this day was a culmination of everything she had lived until then, including the years when she couldn’t bear to speak of her mother or even name her “mother.” The reality of forgiveness is crushingly difficult, or rather, not humanly possible at all.

And yet forgiveness, we might say, is Jesus’ middle name. It is his word from the cross. It is the word that liberates and delivers us from the powers of hell. For unforgiveness hurts, too. It rolls the stone back against the entrance of the tomb.

It seems strange to say that the way to forgive is to receive a gift. And that may explain why it can take so long, because some gifts take time to absorb. That’s all right, because it’s what time is for — to help us receive the presence of God within and among us.

We took 50 days to receive the good news of Easter Sunday, that life conquers death; it takes a lifetime, an eternity, to receive the abundant life that God brings in Christ through the Spirit. Once it takes us over, including in the broken places, how can we not forgive? Until we get there, how can we forgive?

Forgiveness is God’s to give.

How can there possibly be human forgiveness? The answer is given in three words, as we have been hearing since Easter Sunday and again this day of Pentecost, in John’s Gospel: the gift of Christ, sent by the Father, bringing the Spirit.

The greatness of being made in the image of God, as humans are, is the dignity it gives: that we have a divine capacity for forgiveness. It’s not just a moral imperative, but a reflection of the unique relationship between humanity and the divine Trinity.

The image of God in us, broken through sin, is restored through forgiveness. God restores it by healing us, in the cross and Resurrection, showing us the limitlessness of God’s forgiveness.

The limitation Christ reveals is not in God, but in us, who limit God’s forgiveness until we live fully our created destiny as image of God. Our true nature is revealed, and to be fully restored it needs to act in forgiveness. In this way, we can participate in the divine life of God who forgives and heals us.

Psychotherapists and neuroscientists are learning that unforgiveness is unhealthy and hard on us. There’s something in our nature that’s created to act in forgiveness; it’s not only a moral requirement, but the way we are meant to grow and develop.

Jesus “breathed on them and said to them, ‘Receive the Holy Spirit. … Forgive.’” It’s not only a power the church receives; it’s the Creator breathing again in us the breath of life, as in the Garden of Eden, but now connecting that new life with the call to live forgiveness.

Forgiveness, received and given, is how each person is re-created as a true image of God. It was audible and visible in the quiet radiance of Ruby that Easter morning. It’s the particular graced work of the church, whose birthday we celebrate at Pentecost.

Forgiving is a birth — a labor. By undertaking the long, painful, creative labor of forgiveness, we participate in the renewal of our nature. Ruby’s story witnesses that this is not just talk, but the real story of our lives.

Marrocco is a theologian, writer and practicing psychotherapist. She is involved in spiritual formation of seminarians and lay pastoral workers in Toronto and founded St. Mary of Egypt Refuge, a place of hospitality and welcome for people in need. She is an ecumenist who specializes in the relationship between Eastern and Western Christianity.

NEXT: Readings of the Holy Mass – Pentecost Sunday