Lessons in morality and philosophy in a superhero movie

The most likely place to find uplifting messages about the human spirit these days is in superhero movies. Spider-Man risks himself to save others because he takes to heart his beloved uncle’s words, “With great power comes great responsibility.”

Batman’s moral code forbids him to deliberately take a human life, even that of the Joker who lives to turn others toward evil. Daredevil (in the Netflix series bearing his name) struggles to reconcile his Catholic faith with the darkness he finds, in himself and others, while fighting criminals.

Set aside the special effects and you find reflections on the standards we must live by if we are to use wisely the gifts we have been given. The messages are writ large because the heroes have gifts we can only imagine.

The wildly successful movie franchise featuring the Avengers, now ending with “Infinity War” and “Endgame,” is no exception. The films depict a cosmic struggle between what in my college philosophy courses we called two moral methodologies.

The villain is a warlord from outer space named Thanos who is dedicated to saving us from ourselves. He explains to one character: “Little one, it’s a simple calculus. This universe is finite, its resources finite. If life is left unchecked, life will cease to exist. It needs correction.” He wants to seize ultimate power so he can snap his fingers and … make half of all living things vanish.

Thanos sees himself as a great humanitarian, an idealist who wants those who survive to flourish and be happy. He is like the population planners who maximize access to abortion to bring people and resources into a more sustainable balance. There is even a meme on Facebook featuring Thanos with the caption, “I stand with Planned Parenthood.”

His moral approach is utilitarianism. He will reduce suffering and maximize pleasure for half the people by making the other half (more or less painlessly) disappear, which he calls an act of “mercy.” In short, the end justifies the means.

His foil is Steve Rogers (Captain America). Other Avengers have more amazing powers, but he is the group’s moral center.

Having been frozen near the end of World War II and revived only recently, he has retained his code of honor and his belief in moral absolutes from a simpler time. Sometimes the other Avengers tease him about his old-fashioned ways, but when the chips are down, they look to him as a natural leader. 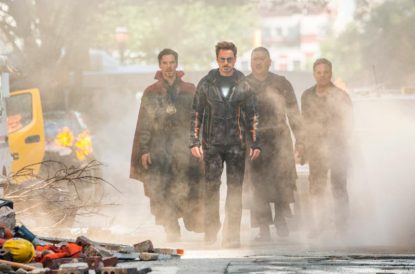 He rejects Thanos’ moral calculus out of hand. Even when told he might save the universe by taking the life of one Avenger (an android at that), he insists: “We don’t trade lives.” He represents a “natural law” morality found in Catholic teaching.

One Avenger in desperation does seek to end her friend’s life, at his request, only to find this achieves nothing. Thanos himself is surprised to find that his efforts produce not “a grateful universe” but societies wracked by grief and survivor’s guilt.

He decides he was not radical enough: He needs to make everyone vanish and start the universe from scratch, so no one will remember anything except gratitude for their existence.

There is nothing more frustrating than utilitarianism that isn’t useful. If beneficial consequences are your standard for right and wrong — and they don’t happen — you can’t even say that at least you did the right thing.

Who does prevail, and how? I won’t reveal that here. But in our current debates on abortion, assisted suicide, embryonic stem cell research and so much more, we are in the same moral struggle. And we will need to make a decision.

PREVIOUS: The good Samaritans under arrest

NEXT: An unexpected voice, a painful message