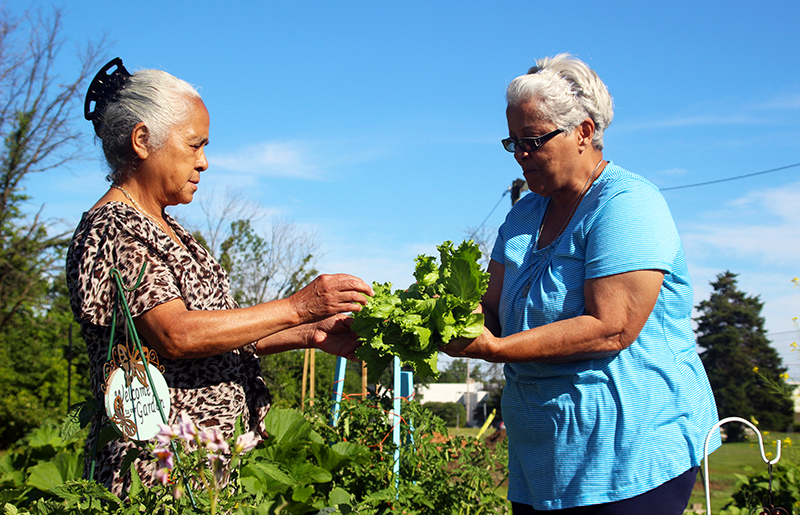 While mowing some 20 acres of grass at the former Our Lady of Fatima Parish in Bensalem, Jerry Capie often thought the land had unrealized potential.

“We maintained the property and planted flowers, but for years we’d always talked about doing a community garden,” said Capie, a longtime volunteer. “We just never had the impetus.”

That changed in 2014, when the parish merged with nearby St. Charles Borromeo Parish, also in Bensalem, and the site was rededicated as the Fatima Catholic Outreach Center. Through a partnership between archdiocesan Catholic Social Services (CSS) and St. Mary Medical Center, the outreach began offering a wide range of social supports to area residents, and talk of a community garden quickly sprouted.

Almost five years later, those plans have come to fruition, with 44 raised beds now yielding a first crop in the 10,000-square-foot parcel on Street Road, which lies adjacent to the center’s soccer fields. The Fatima Community Garden will be officially blessed by Auxiliary Bishop Edward M. Deliman at a June 15 celebration that will feature choral music in both English and Spanish, children’s activities and Latin American cuisine.

As with most garden projects, the journey from seed to harvest has been a long one, with many hands working together to bear not only fruit, but herbs, vegetables and genuine friendship.

A key task in building a garden is soil preparation, and for CSS’s Estela Reyes-Bugg, the community garden had to first take root in the hearts of those who would work the soil.

“I had to be sure they wanted this,” said Reyes-Bugg, who managed the project in her role as CSS’s administrator of volunteer and parish community relations. “You really need to bring people to the table, and ask instead of imposing it on them. Otherwise, it doesn’t work.”

Providentially, CSS board member Jacqueline Delaney, a member of the Pennsylvania Horticultural Society (PHS), had also envisioned a community garden at Fatima, and suggested that the archdiocese partner with PHS for the initiative.

With approximately 150 such projects already in place throughout the area, PHS was able to supply guidance and materials, and to accurately forecast the cost of the undertaking, which so far has totaled close to $30,000.

That sum is about average, said Justin Trezza, director of garden programs for PHS, adding that some community gardens require initial investments of up to $50,000.

Although soil and seeds are relatively inexpensive, lumber, tools, deer fencing, sheds and labor factor into the overhead.

The majority of the costs were one-time start-up fees, said Delaney, who along with her husband Jim donated substantially to the project. Additional funding was provided by CSS, PHS and a grant from archdiocesan Nutritional Development Services.

Given the financial commitment required for the project, Reyes-Bugg — who had already been working at Fatima to develop community leadership among clients — spent a year conducting approximately 50 one-on-one interviews with potential gardeners, assessing their interest and availability.

Working with PHS, and drawing on her experience in creating three other community gardens, she helped the group to draft bylaws, create and elect a board, and establish committees. The gardeners settled on an annual membership fee of $35 per plot, which will help to cover ongoing expenses such as water usage.

Members who fail to maintain their plots will be required to forfeit them without a refund after three written warnings, although Reyes-Bugg doubts that such measures will be necessary for the project’s participants.

“They’ve thoroughly taken ownership,” she said. “We ended up saving money, because they did so much of the work themselves. They were so excited when the soil came that they began planting on their own before PHS even brought seeds.”

The enthusiasm stems from the fact that most of the gardeners — largely parishioners from St. Charles Borromeo — are immigrants from Central American nations where small-scale sustenance farming is common.

“They each call their parcel ‘my little finca,’ which translates as ‘my farm,’” said Reyes-Bugg.

Miguel Angel Romero-Serafin, a St. Charles Borromeo parishioner originally from Mexico, was excited by the prospect to cultivate his own plot.

“I’m growing vegetables, including tomatoes and green peppers, along with cilantro,” he said. “And I’ve also planted blueberries and watermelon for the summer months.”

Romero-Serafin, who admits he sometimes talks to his plants to encourage their growth, plans to share his harvest with others, including his “vecinos en el huerto,” his neighbors in the garden.

Capie, the finance liaison for the garden, has already harvested a few radishes, which he said his wife Karen has “tasted and approved.” Although he does not speak Spanish, Capie said that the camaraderie among the participants transcends any language barriers. 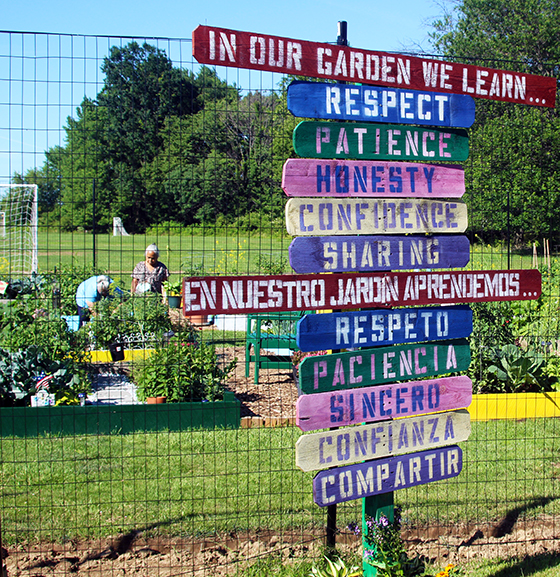 A bilingual sign at the entrance of the Fatima Community Garden in Bensalem reminds participants of the project’s core values. Spanning 10,000 square feet of property at the Fatima Catholic Outreach Center, the garden was made possible through a collaboration among archdiocesan Catholic Social Services, Nutritional Development Services, St. Charles Borromeo Parish and the Pennsylvania Horticultural Society. (Gina Christian)

“Some of us know a little English, others a little Spanish, and we get by,” he said. “It doesn’t matter who you are or what background you’ve got. Everybody is the same when they’re a gardener.”

In addition to bridging cultural groups, the project has also spanned generational divides.

“About 10 percent of the participants are youth,” said Reyes-Bugg. “The parents, who were born abroad, want to pass on their heritage, and they want to teach their children how things grow, and how much work is behind the simple act of cutting a hot pepper or a tomato that has to be grown from seed.”

The garden has lifted the spirits of seniors, who make up about 65 percent of the membership.

“They come to visit the Blessed Sacrament in the Fatima chapel, and then they have something to do here afterwards,” said Reyes-Bugg. “I’ve had several of them, who used to be very depressed, say to me, ‘I still have the same problems, but coming here makes me forget about them.’”

Along with fresh produce, the garden is bearing spiritual fruit among those tilling its beds. Participants, many of whom have decorated their beds with statues of angels, are planning to install benches and to begin praying the rosary among the rows of plants.

“This is not merely a community-building initiative,” said Father Philip Forlano, pastor of St. Charles Borromeo Parish. “There’s really a spiritual lesson here. Faith is shared when life is shared, and this is literally a way that you’re sharing life.”

Father Forlano also observed that beyond the “utility of growing fruits and vegetables,” it is important to “cultivate beauty,” since it is “a reflection of God.” In his encyclical “Laudato Si’,” Pope Francis stressed the same point as a counter to exploiting, rather than stewarding, nature.

For Reyes-Bugg, the practical, therapeutic and spiritual aspects of the garden are naturally intertwined.

“Even touching the earth invites you into the mystery of life,” she said. “Because of your hands, someone else benefits.”

And that sense of interconnectedness is what defines a true community garden, she added.

“When we say grace, if we pray for the hands that provided and prepared our food – how many hands are involved in a simple dish of beans, rice or salad?” she said. “How many hands have been involved to nurture us?”

PREVIOUS: Reading to kids makes for a better Father’s Day, every day