Jesus remains the door to life, liberty and happiness

Taking the back roads to the Jersey Shore, I drove by an unusual sight: several doors stood upright in an open grassy field.

Without supporting structures, the doors appeared to have no practical purpose. Did someone place them there to make a statement to travelers passing by? Curiosity got the best of me and I pulled over for a closer look.

Some doors were decorated with hand prints and crosses, while others had messages declaring “Sing and rejoice!”, “Hope!” and “God is good!”

Jesus invites everyone to enter his kingdom. But accepting Jesus, walking through the door, means leaving behind the world and all its false promises. It requires conversion, turning from sin and being made anew.

I once got in a conversation with a man about Jesus. He told me he believed in him, but didn’t want to change. He wanted to keep having sex with women and living the fast lifestyle to which he was accustomed. His honesty was refreshing, yet I felt sad for him, knowing that such a path would ultimately fail to satisfy. And worse, several women would be left feeling like collateral damage.

Then there are those of us that have accepted Jesus, yet stand outside the door. We know him, but do we follow him?

As one priest challenged in a recent homily, we must ask ourselves: “Do you want to be a saint?”

A good question! And a tough question.

Some days my answer is “yes,” and other days it’s “no.” The saints lived radical lives. Do we have the courage and commitment to follow their example on a continual basis?

There’s no question it is difficult to be a Christian today. But life without Christ is even more difficult. 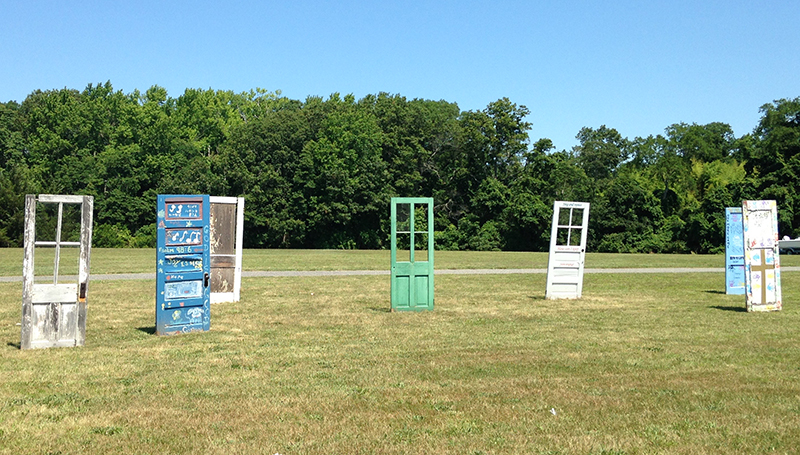 As Americans, we often pride ourselves on our ability to pursue happiness. In a few weeks’ time, we will celebrate Independence Day, when we recall the signing of the Declaration of Independence, that pivotal document stating that all have the right to “life, liberty, and the pursuit of happiness.”

Signed in 1776, the Declaration was written and endorsed by God-fearing individuals who believed these rights were given to us by the Creator.

How far we have strayed in the years since! Forgetting, denying or ignoring the existence of our creator, we withhold the the right to life from the least among us.

Liberty? The sins of pornography, materialism and addictions have left us as a people in spiritual bondage, far from free.

And happiness? Suicide is on the rise, and so too the use of opioids and antidepressants.

Our nation is suffering because we as individuals are suffering.

Still our creator calls to us. The door remains opens to us today. Jesus refers to himself as the “gate” or the “door.” He instructs the crowd that “whoever enters through me will be saved, and will come in and go out and find pasture” (Jn 10:9).

Things can get better. And Jesus is still our hope.

Do we have the courage to say “yes” to our creator and the conversion he asks of us? Do we want to be saints?

It’s through Jesus that we can find “life, liberty, and the pursuit of happiness.”

The door is open.

Kim Griffin is a member of the Parish of the Cathedral Basilica of SS. Peter and Paul, Philadelphia.

PREVIOUS: The Beatitudes are a joyful declaration of dependence on God

NEXT: Like the 72 disciples Jesus sends, we too are on a mission