Mary meets women in the crossroads of life

As technology awes, it reminds us of our humanity

Father Augustus Tolton: The sign we need for today

I recently participated in a conference that explored the church’s sexual abuse crisis and the effect the crisis has had on the church’s witness in the public square. Midway through the conference, as we were turning our attention to the role of Catholic faith in public life, one of the organizer’s quipped, “Well, even if things are going badly in the church, at least things are going well in the country.”

We all laughed and then collectively sighed. Signs of hope are few and far between these days.

It’s clear that procedural reforms, new policies and better laws are important for moving us beyond our current ecclesial and national failures.

But what’s more evident to me is that we need saints, and we need them now — ordinary men, women and kids whose lives point to something and Someone beyond here, to that age-old trinity of goodness, truth and beauty.

What I’ve been amazed at is that the Holy Spirit generously offers us new blesseds and venerables to help show us the way, right in the nick of time.

These men and women lived in different eras than our own, yet many of the issues they dealt with are the ones we’re facing today. After all, history repeats itself, and human nature remains predictable.

One such figure who comes to mind is Father Augustus Tolton.

In June 2019, Pope Francis recognized the heroic virtue of Father Tolton, the first black priest in the United States, and granted him the title “Venerable.” Born into slavery in 1854, Father Tolton escaped with his mother and siblings to Illinois in 1862. 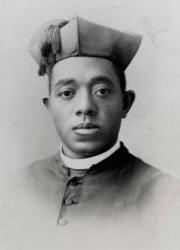 Though his vocation was encouraged by a white priest, he was denied entrance to any American seminary and was forced to study for the priesthood in Rome. Father Tolton was warmly received by the lay faithful when he returned to the United States.

He would go on to endure racial prejudice throughout his ministry, and his final assignment was to found and serve St. Monica’s Church, Chicago’s first parish for black Catholics. At the time of his death in 1897, the Chicago Tribune characterized Father Tolton as “remarkably popular.”

Bishop Joseph N. Perry, auxiliary bishop of Chicago and postulator for Father Tolton’s cause, had this to say about his life: “(Father) Tolton’s story is one of carving out one’s humanity as a man and as a priest in an atmosphere of racial volatility. His was a fundamental and pervasive struggle to be recognized, welcomed and accepted. … He persevered among us when there was no logical reason to do so.”

At a time when America’s original sin of racism is rearing its ugly head again, Father Tolton’s life is a testament to the fact that one person’s commitment to holiness can help to affect systemic change, far beyond one’s neighborhood or lifespan.

Civil and political strategies to combat racism are absolutely necessary. So, too, are men and women who persevere in living the tenets of Christianity in the face of great adversity. Conversion by attraction remains effective.

And at a time when Catholics have lost confidence in their leaders’ integrity, Father Tolton shows us how to remain Catholic despite the failures at the top. Father Tolton, along with innumerable black Catholics, remained active members of the church despite its complicity with slavery and racial injustice.

In an interview with National Catholic Register, Bishop Perry said that black Catholics continued to hand on the faith not because they had to but because they could “see the truth of the Catholic religion beyond the harbingers or practitioners of it that were not showing it at its best.”

Of their fidelity, Bishop Perry said, “Unless you love Jesus Christ, it makes no sense.”

What a message for the rest of us living in the aftermath of scandal.

Venerable Augustus Tolton, pray for us.

Elise Italiano Ureneck, associate director of the Center for the Church in the 21st Century at Boston College, writes the “Finding God in All Things” column for Catholic News Service.

PREVIOUS: She admires Catholic teaching, but what’s with this institution?

NEXT: On the new ‘nationalism’