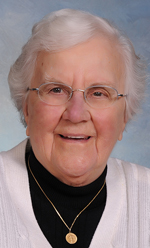 Sister Jordan Marie Goeke, O.S.F., died June 28 in Assisi House, Aston at the age of 95. She had been a professed member of the Sisters of St. Francis of Philadelphia for 71 years.

She was born Mary Winifred Goeke in Trenton, New Jersey where she was a member of Immaculate Conception Parish and a graduate of Cathedral High School. She entered the congregation in 1945 and professed her first vows in 1948.

Sister Jordan Marie studied nursing at St. Joseph Hospital in Baltimore where she became an R.N. She later earned a BSN in nursing and a MSN in administration, both from Duquesne University.

She spent 24 years in ministry at Neumann University where she served as the director of health services, among other roles.

She also ministered in community service for the congregation at Our Lady of Angels Convent in Aston.

Sister Jordan moved to Assisi House in 2014 and served in prayer and hospitality ministry until her death.

The funeral Mass was celebrated July 2 at Assisi House, Aston, with burial following in Our Lady of Angels Cemetery.

Sister Jordan is survived by her nieces, her nephews and by her Franciscan family. Donations in her name can be made to the Sisters of St. Francis Foundation, 609 S. Convent Road, Aston, PA 19014.