The curious ways of providence 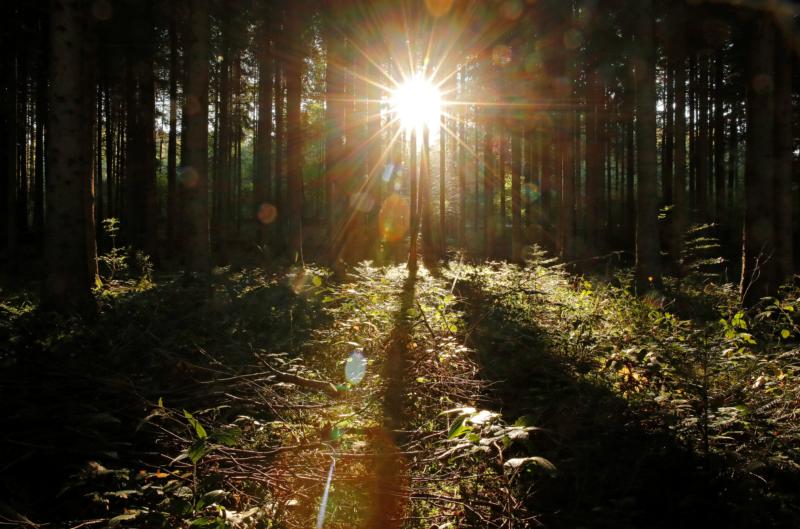 Sun rays shine through trees in a forest in late September near Biere, Switzerland. A frequently heard question asks, “Why do bad things happen to good people?” The question reflects an attempt to come to terms with life’s least welcome events. (CNS photo/Denis Balibouse, Reuters)

What does God do the whole day long? Sure, it’s a mystery. But God hardly is sleeping, resting far from the complex, often painful realities of our lives. Does it sound plausible that God’s presence in our world could be passive or purposeless?

A frequently heard question asks, “Why do bad things happen to good people?” The question reflects an attempt to come to terms with life’s least welcome events.

The different question I raise now might be viewed as that one’s reverse side. Why do good things happen to people of all kinds, unexpected things with much-needed results?

Is it only coincidental when events transpire in such a way that light overcomes the darkness in someone’s life, seemingly against all odds?

It seems less like coincidence if biblical revelation is taken seriously. The Gospel of John’s first chapter speaks of Christ as “the true light” that “shines in the darkness,” which does not “overcome it.”

This is, moreover, the Word of God. This is the Word who “became flesh and made his dwelling among us.”

Consider all that the Word of God living among us might do. A word can be heard and make known the presence of the one who speaks. A word, language, can be employed to call out, to encourage and motivate or to cast light on difficult-to-handle situations.

There are countless ways for the Word of God to urge people along and invite them into renewed, fuller lives. These are the ways of divine “providence,” referring to the actions of a God who is near and whose plans and designs for people and the world are good.

To speak of providence is to speak of a God whose light enters the lives of individuals, families and communities, as well as nations and the world itself. But, theologians stress, God’s activity and plans do not negate our free choice. God awaits our willing response.

Long ago when I was a teenager and my father was dying of cancer, I met a Benedictine seminarian who seems to have understood better than I did the effects of this situation on me.

At a consequential time in my life, when I needed to cope with my father’s coming death, this light-bearing Benedictine reached out in supportive, inspiring ways I never would forget.

Years later I wondered how that “good thing” happened. I always sensed that the hand of God was active then and there, and with positive life-changing effects for me. Was God near?

Bishop Daniel E. Flores of Brownsville, Texas, does not appear to think that developments like that one are the result of mere luck. He spoke in a 2018 speech of the role Christians fulfill for others by accompanying them when needed.

“If we have experienced what it means to be accompanied, we can better understand the call to accompany others. First, we must admit that there are no accidents or luck on this road, only the providence of God,” he commented.

“The Lord acts,” Bishop Flores said, “through the disciple who loves without having another motive.”

When he was 18 and preparing to go to college, he said that his grandmother told him “she would pray that God put good people on (his) path, people who are compassionate, just and generous.”

The bishop explained, “We believe in this, in the God who has moved hearts to accompany us when we have felt alone, confused or isolated.”

Happily enough, this means that the followers of a God whose providence expresses care and concern for the well-being of the world and its people are called to act similarly. Bishop Flores put it this way:

“The encounter with Jesus continues coming into the world through disciples capable of opening their lives to the personal encounter with those whom God has placed on our paths.”

NEXT: A Christian understanding of divine providence